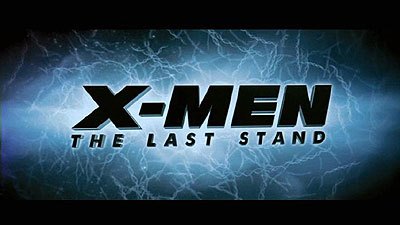 
The Story So Far...
Though the exploits of Charles Xavier and his school of mutants have been hugely popular as a comic-book franchise for decades, until Bryan Singer got his hands on them, they were relegated to just a few decent cartoon series. Then, the director, and an all-star cast, put together one of the best comic-book movies ever, and followed it with a sequel that was just as entertaining. The films have been released a number of times in the years since, and DVDTalk has reviews of them: X-Men Geoffrey Kleinman | Aaron Beierle; X-Men 1.5: Aaron Beierle | Jason Bovberg; X2: David Blair | Aaron Beierle

The Movie
When I first saw X-Men, I was ecstatic. This was everything I had ever wanted in a superhero movie: a great storyline, fantastic actors, excellent special effects and some loyalty to the source material. Then, they followed it up with X2 and I was hardly disappointed, as they built on everything the first film introduced, and ended on a terrific moment that brought both films to an appropriate conclusion. So when it was announced that the man behind those first two films, director Bryan Singer, was moving on to work on his Superman film, my hopes for X3 fell a bit. The announcement of Matthew Vaughn joining the crew left me indifferent, but when he left shortly before production started, and was replaced by Rush Hour director Brett Ratner, I wrote off X3 as something of a pointless sequel.

I have enjoyed many of Ratner's films, but nothing he's done told me he had what it took to tackle the challenge and expectations, especially under the circumstances that saw him join the film. But, it's the X-Men, and the cast is essentially the same, so I was certainly going to give it a chance. That chance paid off as Ratner overcame the obstacles to pull together a high-energy, entertaining popcorn movie that was just as action-packed as its prequels. This film certainly doesn't have the same subtexts (for example, using mutant powers as a metaphor for homosexuality) or complexities of character, but if you just want to see a mega mutant melee, this is the right movie for you.

Picking up from the finale of the second film, X3 explores the effects of Jean Grey's (Famke Janssen) actions and what they have done to the team. They still call Xavier's school home, but something is off. When Cyclops (James Marsden) takes off to cope with his pain and some odd thoughts in his head, it begins to reveal just what happened at the end of the second film. Another plot, featuring the introduction of Angel, the winged mutant, sees a "cure" for mutant powers developed, which creates a rift among the superpowered, some of whom want the drugs. Of course, the supervillain Magneto (Ian McKellan) sees this as a threat to his species, and forms a brotherhood of mutants in an effort to stop the cure's production. Along the way, his path crosses with that of Jean Grey's story, creating a double-barrel case of trouble for the X-Men. 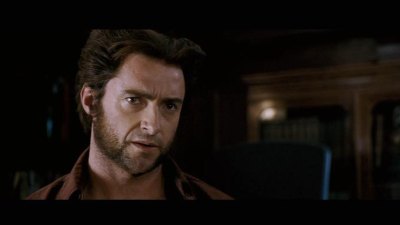 While a scene in which Xavier and Magneto argue to gain control of Jean Grey's powers is as dramatic, compelling and visually exciting as anything in the trilogy, the majority of the film comes off as answers in search of questions, as big action scenes without much motivation or reason are linked together by scenes desperately attempting to explaining them. There's no arguing that the displays of superpowers aren't examples of great action filmmaking, but cohesive it's not. It's Ratner's inexperience with quiet, emotional scenes and the screenwriters' seemingy apparent lack of interest in such moments that robs X3 of the power the other X films have, with the exception of Angel's emotional first apearance. The Rogue/Iceman love story, which could have anchored the film the way the Iceman/Pyro story did in X2, is given half-hearted treatment, and there's nothing nearly as earnest as the "coming out" scene in X2.

On the acting side of the ledger, most of the recurring cast is going through the motions established in the previous movies, though Hugh Jackman manages to still command the screen without doing anything all that different. Ellen Page (Hard Candy) is a nice addition as Kitty Pride, playing the part of the rookie with the right amount of insecurity, while the supervillains seem to get the most fun, showing a wide range of powers and looks. Only Vinnie Jones, in a thankless role as the musclebound Juggernaut, and Halle Barry, as the team leader and comedic lightning-rod Storm, will want to leave this film off their resume, as neither advanced their causes as actors. It's amazing how the character of Storm simply doesn't work well, but considering it's been two directors and a host of writers so far and just one actress, it might just be her fault.

It may sound like I'm slamming this film, and I will admit I displayed the trademark behavior of the frustrated filmgoer--making fun of the film while it played--but I definitely enjoyed X3 as mindless entertainment. It's simply a guilty pleasure, but after the first two films, this movie should have aspired to be more than that. That's the film's biggest sin: it's not a Bryan Singer film, it's a Brett Ratner film. Other than that, it's a good time.

The DVD
Fox is releasing X3 in two versions, a standard edition, and a collector's edition that comes with a 100-page book. DVDTalk received the standard edition to review. This release arrives on one disc, which is packed in a standard keepcase. Popping the DVD into your player, you get the choice to join Magneto's brotherhood or take a stand with the X-Men, which affects which animated, anamorphic widescreen menus you see. These menus, which feature well-used surround sound effects, are nicely done, but whoever thought to use a yellow cursor highlight on an orange background wasn't doing any favors to the viewer. 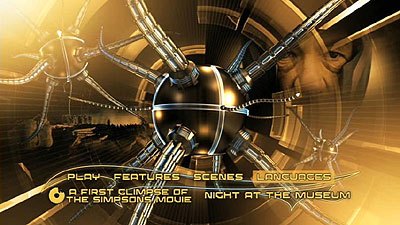 The menus offer a choice to watch the film, select scenes, adjust languages and check out the special features. Language options include English Dolby Digital 5.1 EX and DTS 6.1 ES tracks and French and Spanish Dolby Digital 2.0, while subtitles are available in English and Spanish, along with closed captioning.

The Quality
Once again, Fox has deemed it necessary to bestow upon reviewers another big-title screener marred with watermarking. When not covering part of the screen with a studio logo, the very wide anamorphic widescreen transfer is exceedingly pixelated, with scenes depicting any kind of action or fine detail collapsing into a sea of digital artifacts. Overall, the color is decent, but everything else is an utter mess, on par with a low-quality internet download. If Fox provides final product, this rating will be amended.

(Update: For the Collector's Edition release, we received a final retail version, so the anamorphic widescreen video wasn't affected by the watermarks put on screener copies of X3. The image is uniformly high in quality, with excellent color, a top-notch level of detail and none of the digital artifacts seen in the previous version. The high-energy action scenes, like the training missions in the Danger Room show none of the problems seen before. There's also no dirt or damage present. The only downside at all is some softness in the transfer, though that may have been present in the original film.)

What they got right is the sound, with is presented in Dolby Digital 5.1 EX and DTS 6.1 ES. While the 5.1 track is very good, delivering an enveloping soundfield that makes good use of the sides and rear speakers, via panning and solid mixing, it's the DTS track that makes this movie the most fun to listen to. This is an action blockbuster, first and foremost, and that means an all-out aural assault via every speaker, as the fight scenes fill the room with rich, deep sound effects and music. Turn up your system, hope the neighbors aren't home and feel the rumble of the bass and the you-are-there experience.

The Extras
The pickings are pretty slim here, making it seem that a better version (3.5?) is coming someday in the near future. The main bonus features are a pair of feature-length audio commentaries. First up is director Brett Ratner and writers Zak Penn and Simon Kinberg, who are basically just hanging out watching the flick. Considering how Ratner ended up on this project and how intense his schedule must have been, I expected much more in terms of the information provided, but they barely scratch the surface of the film. The second track, a producers get-together with Avi Arad, Lauren Shuler Donner and Ralph Winter, doesn't provide much more insight, sticking to what it took to make a scene come together. No one willing to discuss the directors' revolving door? How about addressing the Halle Berry issue? These "isn't that great" tracks just aren't cutting it anymore.

The remainder of the extras is made up of almost 10 minutes of deleted scenes, which really should be called extended/alternate takes, because that's just what they are. Some of them, like the longer fight scenes, are interesting due to the increased mayhem, but they are mostly superfluous, as the movie overdoes many of these moments already. These scenes can be viewed as a group or individually, with or without commentary, by Ratner, Penn and Kinberg. Some are so short they don't get to say much, while others see the trio just chatting. Also in here are a trio of alternate endings, parts of which ended up in the final film, and one that serves as a set-up for a sequel.

Also on the disc are two X3 trailers, a "24" trailer, three trailers for other Fox Marvel films, and two previews of upcoming Fox projects. A trailer for "A Night at the Museum" is joined by an animatic from "The Simpsons Movie." 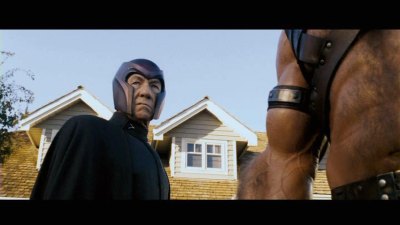 The Bottom Line
Nothing against Brett Ratner, but X-Men movies need a director who can make the epic feel intimate, something Singer does with ease. Though it's a let-down from the previous two films' ability to mix an intelligent story with kick-ass action, this is still a solid superhero flick, with some wild, if overdone battles and more new mutants that you can shake a sharp, regenerated arm bone at. Compared to the first two films' DVDs, the disc feels like the opening act to an eventual double-dip, with much fewer extras than those releases. Unfortunately, a final word on the video quality can't be given at this timeThe video though is quite good, and the audio will rock your socks. If you're a casual fan of Professor X's gang, a rental should do you fine, so you can kill time until a more impressive release arrives. The hardcore fans might not be able to hold off though, and they can feel OK with picking this disc up.