In La Petite Jerusalem, a large suburban area of Paris known for its low-income housing, thousands of first-generation Jewish immigrants are struggling to make ends meet. Many are facing disappointments much stronger than the desire that inspired them to leave relatives and homes behind.

Laura (Fanny Valette), lives with her Sephardic Orthodox family, but doesn't share her relatives' devotion to the Torah. She spends more and more time walking alone on the dark streets of La Petite Jerusalem. Laura is also fascinated by philosophy and the nearby school she attends seems like the only place where she finds solace. 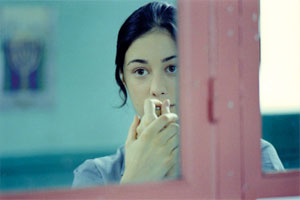 Mathilde (Elsa Zylberstein), Laura's older sister, is having suspicions that the strict rules of the Torah might have pushed her husband Ariel (Bruno Tedeschi) into the hands of another woman. She is determined to win Ariel back by learning what a woman must know in order to keep her man happy.

In the meantime Laura falls for an illegal Muslim immigrant who is battling his own demons.

Long before the Muslim projects of Paris began revolting and international news-networks started broadcasting the riots that engulfed the French capital Karin Albou's La Petite Jerusalem premiered in cinemas making very little noise. Certainly those who initially praised the film must have been a minority as outside of France, as well as small portions of French-speaking Benelux, virtually no one knew about it. Well, deja-vu…that is how I felt seeing La Petite Jerusalem. Here's why:

Even though the story of Karin Albou's film is not as visually explicit as Mathieu Kassovitz's La Haine (1995) there is more than enough here to disturb even the most optimistic of viewers who happen to believe that religious prejudice around the world is gradually subsiding. In fact, I am glad that someone actually had the vision to make this film so that people could see that religion can destroy lives just as easily as it can inspire them. Even in the so-called "developed" countries.

La Petite Jerusalem is built upon two contrasting themes. The first one evolves around Laura and her fascination with the work of Kant. Philosophy and romance are coexisting in a perfect harmony here-at least for awhile providing Laura with everything her heart desires. Then, reality sets in.

The second theme is also the one that drives the film into a territory some feel rather uncomfortable discussing-religious prejudice. As Laura meets the educated Djamel, whose family is as devoted to the Koran as her relatives are to the Torah, something (un)expected happens-religious bias quickly takes over and the two youngsters find themselves playing familiar parts.

In the beginning of this review I mentioned that La Petite Jerusalem created a sense of déjà vu in me. Why? After seeing this film I was quickly reminded how terribly immature most of us are when it comes to understanding the other. Watch carefully how Laura is being treated by her own family, then see her reactions when Djamel's family rejects her. Even though both Laura and Djamel have become so close the minute religion is brought into their world everything collapses with a bang. Doesn't all of this remind you about a much bigger play that is currently taking place??

Winner of the SACD Screenwriting Award at the Cannes Film Festival in 2005. Winner of the Critics Award (Best Film)-French Syndicate of Cinema Critics, 2006.

Kino Video continue to frustrate me with their work!! The company brings beautiful films to the US market and then quickly mars them with PAL-NTSC-plagued ports. I don't quite know how you feel about Kino's practice but I am really getting upset that nothing ever changes. What a shame!

This being said La Petite Jerusalem is presented in its original aspect ratio of 1.85:1 and it has been enhanced for widescreen TV's. As already mentioned it is more than obvious what has happened here-Kino have copied their disc directly from the French PAL master, added English subtitles, and…voila. Had this disc been converted properly we would have had quite a decent DVD to talk about-good colors, decent contrast, no print damage that you should be concerned about. With other words this could have been quite an acceptable DVD.

Unfortunately the only track available here is the French/Hebrew DD 2.0 one which is not bad at all but given how incredibly beautiful the soundtrack to La Petite Jerusalem is I wonder why a more elaborate 5.1 mix has not been provided. There must be a reason...and I am unaware of it!! As it is you should be able to only partially enjoy the film's evocative soundtrack. With optional English subtitles.

In addition to the original theatrical trailer and a gallery of stills Kino have decided to provide an interview with the director of La Petite Jerusalem (Mrs. Albou speaks excellent English) in which she discusses how the film became a reality, what it strives to accomplish, as well as her work with the actors and technical crew.

What a magnificent film! With so much heart! And what a disappointing DVD presentation! If Kino were to provide a proper transfer with a bit more supplemental material I would have placed this disc in the DVDTALK Collector Series. As it is I will only recommend it entirely on the strength of the film temporarily forgetting about the transfer fiasco. (If La Petite Jerusalem however appears with a native PAL transfer, English friendly, do not hesitate to add it to your library).