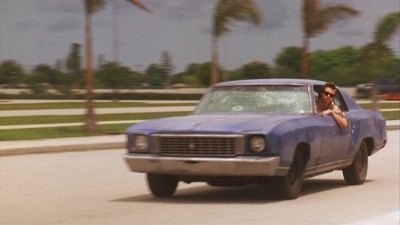 It's always fun to glance back at a celebrity's formative years, but Tom Shadyac's Ace Ventura: Pet Detective (1994, at top and below left) was hardly the first time we'd seen Jim Carrey in full-on goofy mode. He first caught the attention of most fans during his time spent on In Living Color, the groundbreaking sketch-comedy smorgasbord that also put all 26 Wayans brothers on the map. Carrey was certainly noticeable in earlier films and shows like Earth Girls are Easy (1988) and "The Duck Factory" (1984), each of which catered to his off-kilter sense of humor. Still, it's the triple threat of Pet Detective, The Mask (1994), and Ace Ventura: When Nature Calls (1995, below right) that cemented his popularity---and though the charismatic actor nearly painted himself into a corner, he certainly made quite a name for himself in the process.

Like most other Carrey fans, I appreciate his more "serious" efforts (The Truman Show, Eternal Sunshine of the Spotless Mind, etc.) than the films mentioned above, though he occasionally manages to find a comfortable middle ground (Liar Liar, The Majestic). Still, it's nice to know that an actor who shouldn't be known for versatility has starred in films that have garnered such wide appeal. I prefer Man on the Moon to Dumb and Dumber, but they're both enjoyable films.

Rewinding a bit, it's hard to ignore Ace Ventura: Pet Detective, if only because it was Carrey's first big-screen starring role. The plot revolves around Ace's efforts to retrieve Snowflake, the kidnapped mascot of the Miami Dolphins, before the upcoming Super Bowl; the case, naturally, takes a turn for the worse as the kidnapping leads to a murder investigation. Though the majority of the film relies heavily on Carrey's excessive mugging and plenty of off-color humor (including a climax that's a little funnier if you've seen The Crying Game), the total package is still fairly entertaining. Supporting roles are handled capably by Courtney Cox, Dan Marino, Tone Loc (!) and many more. Though Pet Detective shows its age at times, it's still a fun ride that holds its own…if you're in the right mood, of course. (Film rating - 3.5 out of 5) 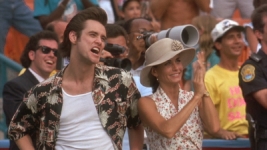 With double the budget and a slightly larger box-office haul, Ace Ventura: When Nature Calls is a entirely different beast altogether. Director Steve Oedekerk (Kung Pow: Enter the Fist) turns the wackiness up even higher…and it proves to be a bit too much, unfortunately. Though When Nature Calls is the rare Carrey vehicle that actually has him in the sequel, it offers proof that some films simply can't be salvaged. It's not a terrible effort, of course: if anything else, it scores a few points for trying so hard. This time around, Ace comes out of retirement (in the Himalayas, actually) to investigate a sacred white bat that might stop a pending war between two African tribes---and somewhere along the way, he ends up emerging from the business end of a mechanical rhino. It's no wonder Carrey's nowhere to be found on the bonus features...or any of the franchise sequels, for that matter. (Film rating - 2.5 out of 5)

Though both were originally issued on DVD more than five years ago, the original Ace Ventura was only available in 1.33:1 full screen format---and no matter if you're watching Rashomon or Killer Klowns From Outer Space, a modified presentation just doesn't cut it. While this new anamorphic transfer corrects the problem, it's also worth noting that the original film itself is slightly shorter than the first release. A number of deleted scenes were re-inserted on VHS copies and the earlier DVD release, but they're nowhere to be found here. While it's good that this represents the true "Theatrical Cut" of Pet Detective, it wouldn't have killed Warner Bros. to include the deleted scenes separately. Aside from that, this three-disc release suffers from a few other problems; fortunately, a high list price isn't one of them.

Here's the good news: Pet Detective has finally been given a 1.85:1 widescreen presentation on DVD (and 16x9 enhanced, of course!), while When Nature Calls retains the same 2.35:1 anamorphic transfer as the original release. Here's the bad news: they might not look quite as good as you'd expect. Colors are generally accurate, but they're a bit weak in most cases; additionally, there's a moderate amount of dirt and other blemishes during a few scenes. Fortunately, the transfers don't show any noticeable edge enhancement or digital combing, but there's certainly room for some improvement here. All things considered, though, most fans shouldn't be too disappointed.

The audio presentation seems to be on par with the video, if not slightly better overall. Each of the films is presented with 5.1 and DTS English tracks---remastered from the original mixes, apparently---while 2.0 French and Spanish dubs are also included. The audio is generally clean and clear, while the music is strong but not overpowering. English captions, as well as Spanish and French subtitles, have been included for the main feature only. 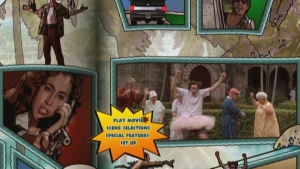 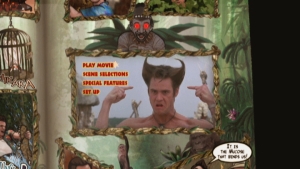 Seen above, the menu designs for this release are simple, appropriate, and easy to navigate (though I can't say I understand the "comic book" motif). These 86 and 94-minute films are divided into just over a dozen chapters apiece, while no obvious layer changes were detected during playback. Each of the three discs is housed in a clear thinpak case with colorful double-sided artwork, tucked snugly inside a cardboard slipcover. No additional inserts are included.

Bonus Features
Not much to dig through here, even on the bonus disc. As for the movies themselves, Pet Detective includes the same feature length Audio Commentary as found on the original release. Featuring director Tom Shadyac, this is a laid back but mildly interesting commentary; even so, the addition of a few cast members would've helped. Also included on each of the first two discs are several Trailers and TV Spots, though they're nothing spectacular. Disc 3 holds the only "new" material: a trio of Bonus Episodes of the 1996 Ace Ventura animated series ("The Reindeer Hunter", "Natural Born Koalas", and "Dragon Guy", roughly 60 minutes total). They're appropriately goofy but easily forgettable---and honestly, most fans of the live-action films would've rather seen deleted scenes, interviews and the like.
Final Thoughts

It's no secret that both films in the Ace Ventura canon haven't aged very well, but that doesn't mean they're still not worth a few laughs. Though Carrey grew by leaps and bounds in later films like The Truman Show and Eternal Sunshine of the Spotless Mind, his unabashed goofiness is still enjoyable to watch every now and then. Warner's three-disc set is a decent enough value for the price, but it's hardly overwhelming in any department (especially the lackluster collection of bonus features). Even so, this "Deluxe Double Feature" is a fairly solid collection that should satisfy most fans of the original pet detective. Remember, folks: a guilty pleasure is a pleasure nonetheless. Mildly Recommended.