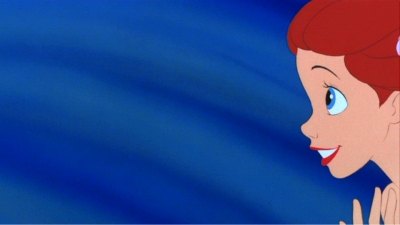 Whether you're a die-hard fan or not, there's no doubt that Disney's The Little Mermaid (1989) holds an important place in animation history. Most remember it as a major turning point for the studio's floundering animation department, which suffered through a number of critical and commercial failures during the previous decade. Combining Disney's animal-centric formula with the Broadway music style that made their films so popular in years past, The Little Mermaid was hailed as "a return to form" by most animation enthusiasts, paving the way for later classics like Beauty and the Beast (1991), Aladdin (1992) and The Lion King (1994).

Based upon the 1836 book by Danish author Hans Christian Anderson ("The Emperor's New Clothes", "Thumbelina", "The Ugly Duckling"), Disney's retelling of the classic story varies quite a bit from the original source material; the major difference, of course, is the happy ending...and no bubbly music cues, of course. Still, the overall plot of Anderson's book is preserved: a beautiful young mermaid longs to live above ground, especially after she falls for a human price. After meeting with a sea witch, the young mermaid agrees to trade her voice for a fin-free human body. Here's the other catch: if she can't win the prince's heart, she's doomed. Obviously, many of the darker themes and spiritual elements were removed to transform this into a family film, but the sanitized final product still manages to work on many levels.

For starters, the visuals are as inspired as any of the other successful elements. Loaded with more special effects than any animated Disney film since Fanstasia (1949), the undersea world of The Little Mermaid still looks lively and immersive by today's standards. It's also the first Disney animated film to use the studio's own CAPS (Computer Animated Production System) software, and does so tastefully and sparingly; this system would also be used to greater effect in later Disney films, though it's no longer used by the studio today. Still, the cels are primarily completed in the traditional ink-and-paint method, giving The Little Mermaid a smooth, vintage appearance without looking too dated. 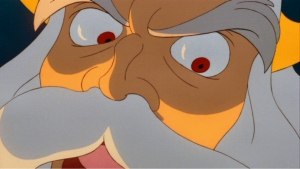 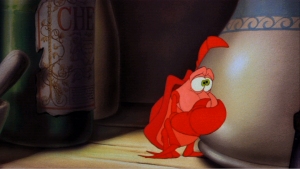 Perhaps the most noticeable highlight of The Little Mermaid, though, is its award-winning soundtrack and score. Boasting a handful of memorable recordings by composer Alan Menken and late songwriter Howard Ashman, The Little Mermaid swam away with a pair of Oscars for Best Original Score and Best Original Song (for "Under the Sea"). Ashman passed away shortly after in 1991, though not before completing the lyrics for Beauty and the Beast's masterful music cues. Thankfully, Menken was still around to add his retrospective thoughts to this new 2-Disc Platinum Edition, including a feature-length audio commentary with the film's two directors.

Though I wasn't completely thrilled with the film upon seeing it in the theater as a ten year-old boy, it's easy in hindsight to see why The Little Mermaid was---and continues to be---such a successful and entertaining animated film. It differs quite a bit from Anderson's original book, but the themes of young rebellion and family acceptance fit the story perfectly; these themes, of course, are elevated even further by the terrific artwork and memorable music. It may not be Disney's finest animated film, but some of its finest films wouldn't have been made without it.

This 2-Disc Platinum Edition is slightly flawed but satisfying, offering a good technical presentation and an entertaining mix of bonus material that fans will enjoy. Even with a few nitpicks (including the blink-and-you'll-miss-it redrawing of this infamous character),it's still a notable upgrade over the original 1999 Limited Issue DVD, a non-anamorphic, barebones release that has long gone out of print. Though most fans of The Little Mermaid have undoubtedly picked up this shiny new release by now, it's still worth a closer look for those on the fence. Shall we?

Quality Control Department
Video & Audio Quality
Presented in a 1.78:1 anamorphic widescreen aspect ratio---slightly modified from its original 1.66:1 presentation, apparently---The Little Mermaid looks very good but not quite excellent. The bold color palette is a real highlight, as the vivid undersea scenes really pop off the screen---but there's a modest amount of color banding, mild pixellation and softness that keeps things from looking better. This is still the best that The Little Mermaid has ever looked (especially since the original release was non-anamorphic), but I was hoping for a slightly more polished presentation.

The audio department tells a similar story, if only due to its abandonment of the film's original presentation. An "Enhanced Home Theater Mix" represents the lone English choice here---and while it's certainly atmospheric and lively, it would've been nice to get the earlier 5.1 mix as well (especially since the packaging lists it!). The dialogue is clean and clear, yet it sounds a bit flat and artificial compared to the fuller, immersive music cues. Many earlier Disney Platinum DVDs have included more than one English mix, so let's hope that this unfortunate trend won't continue. Also included are French and Spanish dubs, as well as optional English captions for the deaf and hearing impaired. 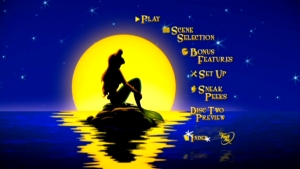 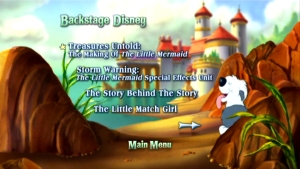 The menu designs (presented in 1.78:1 anamorphic widescreen, seen above) partially preserve the original poster artwork, offering a clean layout and easy navigation. The 83-minute main feature has been divided into a generous 27 chapters, while no obvious layer change was detected during playback. This two-disc release is housed in a slim double keepcase with colorful artwork and a matching glossy slipcase. Promotional inserts and a DVD Guide are also included.

Bonus Features
Keeping pace with other Disney Platinum Edition DVDs, The Little Mermaid includes plenty of bonus features that the entire family should enjoy. Disc 1 begins with a feature-length Audio Commentary with co-writers / co-directors Ron Clements & John Musker and composer Alan Menken; though recorded together, they're smartly arranged so that each participant's voice comes from a different front channel speaker. The three contributors work together to create an insightful and entertaining track, sharing fond memories and a few production snags to boot. Menken occasionally drifts to the background during several scenes, but he naturally chimes in during the key musical numbers (although an isolated music score with commentary could've worked just as well).

Also included is a Disney Song Selection feature; this lets viewers jump directly to any the film's four major musical breaks, with or without on-screen lyrics. Of lesser interest are a new Music Video for Ashley Tisdale's bland pop version of "Kiss the Girl" (3:30), a Musical Preview for The Little Mermaid III (1:21) and a few other Sneak Peeks of upcoming Disney DVD releases (including new editions of Robin Hood and Pinocchio).

Disc 2 kicks off with interesting extras for animated film buffs in "Backstage Disney". First up is the six-part "Treasures Untold: The Making of The Little Mermaid" (45:25, below left), hosted by several members of the cast and crew. Loaded with vintage art and production footage, this informative documentary also includes chats with Roy Disney, film historian Leonard Maltin, former Disney chairman Jeff Katzenberg, director Nora Ephron and director John Waters (yes, that John Waters!). A good mix of back-patting and self-depracation, "Treasures Untold" sheds light on The Little Mermaid's troubled beginnings, long production and, of course, the role it played in the studio's financial comeback.

Two short featurettes offer more crew insight: the first, "Storm Warning" (8:40), reunites the technical team for a roundtable chat about the film's special effects, many of which were "borrowed" from earlier Disney classics. The second, "The Story Behind the Story" (11:40), compares and contrasts the animated film to Hans Christian Anderson's original book. Both pieces are brief, but offer plenty of interesting information without blatantly overlapping other extras. 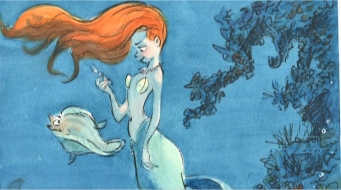 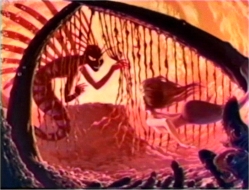 Up next is a short animated feature, apparently exclusive to this set: The Little Match Girl (7:10), also originally written by Anderson. Interestingly enough, this short was originally planned to be part of Disney's Fantastia 2000, but was rejected since another Anderson story was already included. It also keeps the heartbreaking original ending intact, so viewers will want to keep a box of Kleenex within arm's reach. The Little Match Girl is wonderful, superbly animated short directed by Disney veteran Roger Allers, and a valuable inclusion to this release.

Closing out "Backstage Disney" is a trio of Mermaid-specific extras, including a viewer-guided Artwork Gallery and an interesting Early Presentation Reel (2:45, above right), as well as the film's original Theatrical Trailer (presented in 1.33:1 pan-and scan, unfortunately).

The next main section is brief but interesting, as viewers are treated to a handful of Deleted & Alternate Scenes (7 clips, 26:15 total), presented in storyboarded and/or rough animated form. Highlights include a slightly different ending sequence, as well as a song demo for the unused "Silence is Golden" (performed by Alan Menken, audio only). While the majority of this rare footage only includes a few minor changes to finished scenes, they're certainly worth a look.

Winding things down is the kiddie section, also known as "Games & Activities". Highlights include the three-part "Under the Sea" Adventure, a 3-D ride through some of the film's memorable locations (with optional commentary); as well as the educational "DisneyPedia: Life Under the Sea" (8:25), an Animal Planet-style look at aquatic life.

Overall, there's a satisfying mix of bonus material on board here. Though the bulk of it is presented in non-anamorphic widescreen (and without optional English captions), many of the clips include helpful introductions from key participants and crew members. All things considered, it's one of the better Disney DVDs as far as extras are concerned.

It's not a perfect effort, but Disney's Platinum Edition of The Little Mermaid is a worthy upgrade to the out-of-print Limited Issue release (except in the audio department, perhaps). The film has held up well in the past 17 years, boasting a gaggle of great characters and memorable songs---and the film's historical importance can't be argued, either. This 2-disc release could've used more fine-tuning in the technical department, as the exclusion of alternate audio mixes is just plain lazy. Thankfully, the plentiful extras help salvage the overall presentation, offering plenty of goodies for the whole family. All things considered, The Little Mermaid shouldn't disappoint fans of the film and comes firmly Recommended.

Randy Miller III is a moderately affable art instructor and gallery assistant based in Harrisburg, PA, who also enjoys freelance graphic design and illustration. When he's not doing that, he enjoys slacking off, mocking passers-by and writing things in third person.