Huzzah! Finally, a cartoon to offend everyone! The Dick Tracy Show: The Complete Animated Series is one of the worst examples of vintage animation I've seen in some time. I vaguely remember snippets of the show when I was a kid, but in no way did it stick with me in a meaningful way - and now I know why. Running four and a half minutes each, these Dick Tracy cartoons truly are offensive, and not just for the obvious reasons, such as ethnic characters named GoGo Gomez and Joe Jitsu. 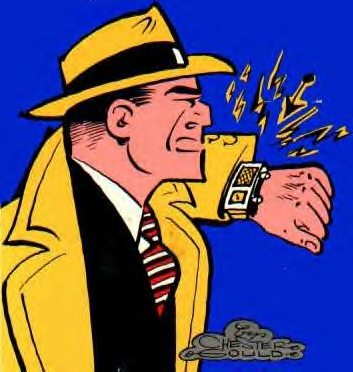 United Productions of America, or UPA Studios, has long held a cult status with animation buffs because of its innovative "limited animation" style that revolutionized the industry back in the 1950s. Reducing the number of "inbetweens" drawings between the keyframes (the frames that defined movement), allowed the animator to greatly speed up the process of animation (while also eliminating the smoothness of more traditional animation, such as the Disney shorts of the 1930s). UPA invented this process, scoring its first artistic success with Gerald McBoing-Boing. What started out as an artistic process (after all, UPA Studios was originally founded as an artistic rebellion against the formalism of the Disney process, by John Hubley, Zack Schwartz, Dave Hilberman and Steve Bosustow), quickly became not an alternative artistic expression, but a cost-cutting measure, and the cartoons that followed suffered for it.

With Hubley out of UPA in the early fifties (due to the HUAC hearings), UPA limped along under Bosustow's reign, until Columbia (who contracted with UPA) and the other major studios began shutting down their animation departments. UPA was sold by Bosustow to producer Henry G. Saperstein, who took UPA out of the theaters and into television, to keep the company afloat. Unfortunately, that meant quality cartoons such as Mr. Magoo largely became cookie-cutter exercises in getting as much product out there as possible, with little or no artistic consideration. And that's where The Dick Tracy Show: The Complete Animated Series comes in. Produced in 1961, these noxious little trifles flooded the TV syndication market with 130 four and a half minute cartoon episodes. What, exactly, their intent was is difficult to say now (Entertain kids? Keep the creditors off the company's back?). One can only view them out of context today, and unfortunately, they suffer greatly by today's standards.

The first major problem that stands out in The Dick Tracy Show: The Complete Animated Series is...where is Dick Tracy? It's his show, and yet, he only sits behind a desk, and dispatches his other crime fighters to solve each show's case. Occasionally, he shows up with a crime fighter, but he still does almost nothing. It's almost as if the creators of the cartoon liked the notion of using the outlandish Tracy villains for the 'toons, but that they had almost zero faith in Dick Tracy as an interesting cartoon character who could carry his own series. So, they push him to the sidelines. And in his stead, we're stuck with Asian detective Joe Jitsu, Hispanic detective GoGo Gomez, English detective Hemlock Holmes and The Retouchables, and Irish beat cop Heap O'Callory. 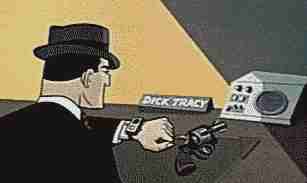 It's a debate that's going to go on for as long as we have movies - the merits and drawbacks of showing racially insensitive material from less sensitive times. While I usually fall on the side of "don't throw out the baby with the bathwater" argument that Leonard Maltin and others employ (especially when discussing some of the Disney cartoons that have insensitive racial characterizations), what I find most offensive about The Dick Tracy Show: The Complete Animated Series is not the racial stereotypes, but the fact that the show is just plain unfunny. People aren't going to like Joe Jitsu's outrageously characterized Asian features, nor GoGo Gomez's ridiculously insulting accent. Nor, for that matter, will people appreciate Heap O'Callory, a fat Irish cop who's always stealing apples. These insensitive characters are enough to make The Dick Tracy Show: The Complete Animated Series a non-starter. But what really grates on me is how gawd awful unfunny it all is. Each little cartoon starts with Tracy saying the exact same thing: "Okay, Chief, I'll get on it right away!" He then calls up one of his detectives, dispatches them to the crime scene, where the detective repeats the same physical gag (various pies, irons, pans, cars, etc. thrown at the villain) over and over again, until the end. Seriously - that's it to these cartoons. There's nothing remotely witty or funny to the proceedings, and the poor production values (particularly the uninspired vocal readings and irritatingly monotonous music cues), detract even further.


The Video:
The Dick Tracy Show: The Complete Animated Series's image is surprisingly clean (as is usually the case with these Sony Classic Media releases). Why anyone bothered to keep the original materials in such good condition, is beyond me.

The Audio:
The Dolby Digital 2.0 mono English soundtrack is unfortunately clear -- you can hear every stupid line, every insensitive accent, and every lame-ass sound effect.

The Extras:
The only extra for The Dick Tracy Show: The Complete Animated Series is an exclusive 64 page comic book that reprints three classic Dick Tracy strip adventures from the pen of Chester Gould. It's nice rendered, but the only possible reason for its inclusion here is to buy off the purchaser of the DVD as an apology for the animated abomination that proceeds it.

Final Thoughts:
I love vintage animation, even if it's a little boring or lame (you can always find something of value in the animation techniques, or even a little sociology in the storytelling). However, there's almost nothing of value in The Dick Tracy Show: The Complete Animated Series. Chester Gould's immortal detective doesn't even star in any of the adventures, so there's little point in the producers of this animated claptrap invoking his image. And the detectives that we do get, are insensitively executed -- and criminally unfunny. I wish there was a lower rating that "Skip it."