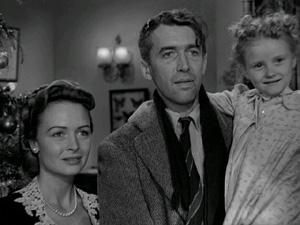 What is there to say about It's a Wonderful Life? Some films are classics for a reason, and there's no cause to cast aspersion on Frank Capra's 1946 Dickensian fable. Despite its ubiquitous presence every holiday season and the years where it seemed like every TV station on the planet had a print of the film, It's a Wonderful Life has never lost a shred of its power. I couldn't tell you how many times I've seen it, but watching it again last night, I had tears streaming down my face. I wasn't surprised to see the town of Bedford Falls rush to help George Bailey in his hour of need, and yet it still affected me. That is the mark of a truly great movie.

Which doesn't mean that It's a Wonderful Life has always gotten the treatment it deserved. Those television airings had gotten increasingly ratty. Thankfully, the joy of DVD has been such that films like this get revisited, restored, and sent on their way with a brand new suit of clothes. Of course, that hasn't stopped film studios from changing those clothes from time to time in an attempt to spruce up catalogue titles, and this new 60th Anniversary Edition is no different. The movie has been moved from Artisan to Paramount, and so it's gotten a new cover and the new edition subtitle, but from my research, there is virtually no other difference. If you own the version reviewed here, then you essentially own this disc. Same print, same extra features, just a new tailor.

If you're like me, however, and you never bought the Artisan disc, then there is no longer any excuse to forego having It's a Wonderful Life in your collection. The price point is decent, and you'll most likely be able to pick it up in a holiday sale in the coming weeks. This is one of the most parodied stories ever written, perhaps only surpassed by its ancestor, A Christmas Carol. That is often considered the sincerest form of flattery, but the true testament of It's a Wonderful Life's greatness is that it withstands the imitation. No one can ever quite capture its appeal, nor can they tarnish its reputation.

For those not in the know, the premise is this: on Christmas Eve, 1946, three angels look down from the Heavens and review the life of small-town banker George Bailey (Jimmy Stewart). He has just had one of the worst days of his life, and he needs some help. To get the fledgling guardian angel Clarence (Henry Travers) up to speed, the angels look at all the events that led George to this point, from childhood good deeds to the many times in his adult life where he swallowed his own dreams to help those around him. Even though he fell in love with a wonderful woman (Donna Reed), has married, and has four beautiful children, George has always acted in the interest of others before serving himself. Things have run out for him, however. His business is about to go under and he fears he will lose everything. Feeling he is worth more dead than alive, he goes to a bridge with the intention of throwing himself off. This is where Clarence intervenes, and he shows George what would have happened to the people around him if he had gotten his wish and never existed, teaching George something about the true measure of a man. 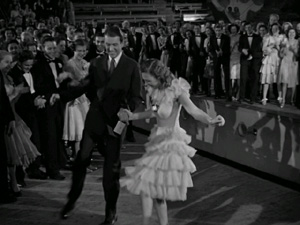 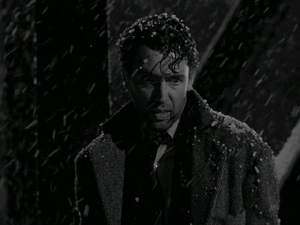 Boiled down, you might think it sounds a little schmaltzy, and it very well could have been. Yet, Frank Capra tempers his unflinching optimism with a healthy cynicism about how low human nature can sink. George doesn't end up on that bridge easily, it's a building weight, the accumulation of failures and defeats. For all the good-guy charisma Stewart displays so naturally (and he was never better), George can be kind of a jerk. When he finally gives in to the feelings he has for Mary (Reed), for instance, the scene begins with him ranting and raving; yet, when they are hovering over the phone, annoyed by the intrusive conversation from one of their friends, saying nothing about what is passing between them but letting it play through gesture and expression, it's one of the most passionately romantic scenes in cinema. Similarly, when George is in his downward spiral, he goes all the way down, getting drunk, fighting, and shouting. Even so, we want to forgive this bad behavior because we have also seen how kind George can be to the people in his life. The resonance of It's a Wonderful Life is that it states its case using realistically written people who have genuine problems. That means the rest of us can relate.

So, regardless of how you're coming to the film, whether returning to an old favorite or giving it a shot for the very first time, It's a Wonderful Life will be a winning investment for you. Even if you just view it once a year as part of the regular holiday edition, it's worth a purchase, as you can watch it whenever you want and without the commercials. If you're a real film fan, though, chances are you'll return to it even more often than that, and I doubt you'll ever grow tired of it.

Video:
It's a Wonderful Life is a full frame film shot in glorious black-and-white. This restored version, taken from the original print several years ago, is as good as it gets. The blacks are black and the contrasts are perfect.

Sound:
The audio is mixed as a Dolby Digital mono track, retaining qualities of the original soundtrack. There is one error on the disc, about seven minutes in when young George is working in the drugstore. In that scene, there is a rather loud pop and a quick fluctuation of the volume. I backed my DVD up and ran it a second time, just to see if it was a one-time anomaly, and sure enough, it was in the manufacturing. I've read a report from at least one other user that had the same problem, so it appears to be a glitch across the run. (He also noted three other instances of a similar audio quirk, but I didn't experience them on mine.)

There is also a French language track and English subtitles available.

Extras:
In addition to the original theatrical trailer, there is a twenty-two minute "Making of" featurette and a fifteen minute tribute to Frank Capra called "A Personal Remembrance." Both are very good, but once again, if you have the Artisan DVD of It's a Wonderful Life, you already have them.

Also in the "Special Features" menu is a little thing titled "Preview." Curious, I clicked on it, and it's the trailer for the Queen Latifah vehicle Last Holiday. Ooookay. Seems like a rather arbitrary choice, Paramount. Is that the movie you really expect most of the It's a Wonderful Life audience will want to see next?

FINAL THOUGHTS:
It's a Wonderful Life is, of course, Highly Recommended. I might have rated it higher had this 60th Anniversary Edition actually been a true upgrade, as Frank Capra's holiday perennial is truly one of the greatest motion pictures of all time. Yet, given that it's a straightforward double-dip and it features at least one audio mess up, I'm going to hedge my bet a little. Even so, It's a Wonderful Life is one of those movies that belongs in every home. Jimmy Stewart is incredible, and the writing packs an emotional wallop even after half a century. The appeal of this film never dulls, and you're going to get more mileage out of It's a Wonderful Life than just about any other DVD in your collection. 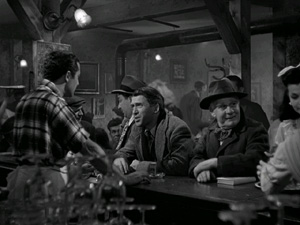