Home Vision Entertainment // Unrated // October 17, 2006 // Region 0
List Price: $99.99 [Buy now and save at Amazon]
Review by Stuart Galbraith IV | posted November 14, 2006 | E-mail the Author
I recently sent an email to a fellow movie buff pal telling him I was in the process of working my way through a mammoth boxed set of short films by Norman McLaren. He wrote back, "Must confess to ignorance about Norman McLaren. Who he?" This reaction is quite understandable. Though he tirelessly directed movies almost continuously over half a century, winning a Palme d'Or at Cannes and an Academy Award in the process, McLaren isn't exactly a household name, even in Canada, where the Scottish-born humanist animator-artist spent almost his entire career. 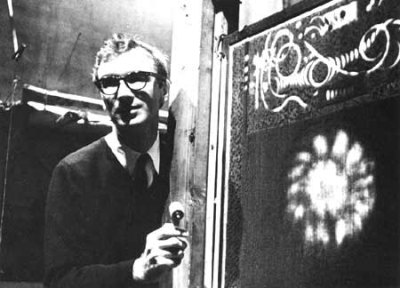 But for those who have seen his work, McLaren's name is magic and his films unforgettable: he's like George Pal, Luis Bunuel and Max & Dave Fleischer all rolled into one. His name became synonymous with the National Film Board of Canada; today it's impossible to think of one without the other, and it's through the NFB comes one of the most important DVD sets of the year: Norman McLaren: The Master's Edition, a hefty seven-disc box set that includes McLaren's entire filmmaking output, including test films and unfinished shorts, along with 14 short thematically-linked documentaries and an impressive, Criterion-style booklet. This may be the first time the entire oeuvre of a single prolific filmmaker has been collected in one colossal package. (Well, there is Don Glut, but....)

Born in Scotland in 1914, McLaren was a Glasgow art student enormously influenced by Russian filmmakers Sergei Eisenstein and Vsevolod Pudovkin, as well as the great surrealist painters. After experimenting with the basic mechanics of filmmaking, he became a protegee of fellow Scotsman John Grierson, widely regarded as the Father of British and Canadian documentary cinema. In 1936 McLaren was commissioned to make a film for the British General Post Office but they hated it, regarding McLaren's animations too abstract and experimental.

McLaren eventually immigrated to Canada, where in 1942 he rejoined Grierson at the newly-formed National Film Board of Canada. Over the next 40 years, McLaren and a team of close collaborators dabbled in and greatly refined almost every form of animation, from drawing, etching and painting directly on 35mm film (epitomized by 1949's Begone Done Care and 1955's Blinkity Blank, which eminently expand upon ideas introduced in Disney's much more famous predecessor, Fantasia); pixilation, the technique famously used in his Oscar-winning Neighbours (1952); and two lovely but rarely-used, time-consuming forms of animation, one involving chalk drawings in which images are slowly added and removed (as in 1945's La-haut sur ces montagnes), the other involving animating pins (as in 1973's Pinscreen) to create an abstract sense of depth.

McLaren was especially interested in combining abstract images with music and dance, as the NFB's own notes put it, his style was rooted in "a choreographic concept that essentially defines animated film as a kinetic art form unrestricted by theatrical or novelistic influences. Nonetheless, in this last category of films, McLaren does not stray from abstract expressionism. In fact, his work is reminiscent of Jackson Pollock and Barnett Newman." 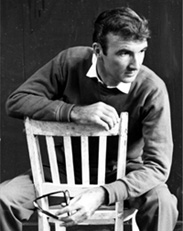 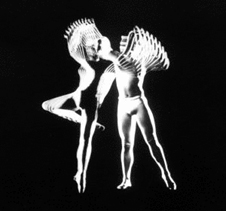 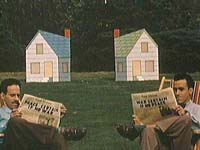 The region-free boxed set, all 15 hours of it, is rather intimidating, especially a first glance at the menu screens and back covers of the seven thin cases, which at least initially are as daunting as a map of the Tokyo subway system. Essentially what the NFB has done is to divide each disc up into between one and four themes. These themes range from styles of animation (as in "Paper Cut-Outs"), subject matter ("War and Peace," "Dance"), stylistic concerns ("Painting with Light," "The Art of Motion"), and collaborations ("Evelyn Lambart," "Maurice Blackburn"). To accommodate this, some movies are repeated from one disc to the next; Blankity Blank, for instance, appears in its entirety on Discs 01, 02, and 05, while Neighbours can be found on Discs 03 and 04. Tossed into the mix are test films, outtakes, and unfinished works, while each theme includes its own short documentary, most of which run about five minutes.

All by themselves the documentaries are extremely valuable, as their mix of film excerpts, archival film of McLaren talking about (and frequently showing the production process of) the very films being discussed, while collaborators and scholars put the work into context. These documentaries are enormously enlightening and entertaining, and the serve their purpose in the most fundamental way: they make you want to watch all the movies excerpted.

Hailing from Canada, Norman McLaren: The Master's Edition appropriately enough is entirely bilingual, with French and English menu screens and films presented with optional English and French audio and subtitles. (Most of the films are mono, but the documentaries and some other material is presented with 2.0 and 5.1 surround Dolby mixes.) Two-thirds of the films have been digitally restored and their clarity is often surprising. You'd never guess that many of these films are 50 and 60 years old; at the same time, the NFB was careful not to remove the imperfections inherit in the original work, so they very much retain a human stamp.

Everything is in its original full frame format. A major caveat, however, is the often extreme windowboxing given McLaren's films. Though one certainly wants to wring every square millimeter of McLaren's art, the windowboxing is greatly overdone, resulting in thick black bars on all four sides and a notably reduced image. Something much less extreme would have been preferable; surely even McLaren was aware and resigned to the fact that when his films were shown some cropping would be inevitable.

Beyond the almost endless outtakes, documentaries and the like - there's so much material an elaborate five-letter code is used to distinguish everything - the thick, full-color booklet offers a foreword by NFB chairman Jacques Bensimon, an essay detailing the technical work done on the films for the DVDs, a useful essay on McLaren by Donald McWilliams, and a good 20 pages of more indexes and chronologies to help viewers wade through all the material. The booklet runs 84 pages, half each in English and French.

Not that long ago about the only way to see movies by Norman McLaren was to rent 16mm prints from educational film distributors or the NFB directly. That all his movies are now available in a boxed set about the size of an almanac and costs just $100 retail is astounding. This is a set for anyone with a serious interest in art and cinema, and its one of the best releases of 2006. A DVD Talk Collector Series title.