Warner Bros. // Unrated // November 14, 2006
List Price: $39.98 [Buy now and save at Amazon]
Review by Stuart Galbraith IV | posted November 27, 2006 | E-mail the Author
By the time Adventures of Superman began production on its last two seasons (that aired during 1957-58), the series more or less had overcome its tight budgetary restrictions by evolving into a veritable universe unto itself. And it was a wacky universe indeed, operating under its own screwy story logic often totally disconnected from any semblance of reality. That gangsters would watch their bullets bounce off Superman's chest then, having emptied their cartridges, throw their empty guns at the superhero, as if that would stop him, or that Superman's pals never seemed to realize that the Man from Kypton and mild-mannered reporter Clark Kent were one and the same, mattered not one iota to its legion of young viewers.

For fans of the comic books, the big-budget movies and TV shows of recent decades, Adventures of Superman rightly appears quaint and at times depressingly cheap, but if you stick with it, chances are you'll find that it has a peculiar but very real charm all its own. This year's Hollywoodland, about Superman actor George Reeves' last years as a struggling actor and a private eye's investigation following Reeves' death (barely a year after the last show aired), adopts a curiously contemptuous attitude toward the show and especially its fan base. Though young children took its wild stories at face value, for many adults the very charm of the show is its good-natured goofiness. 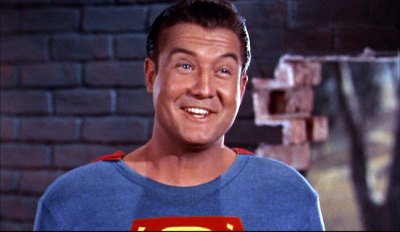 Adventures of Superman is one of the most iconically '50s/Eisenhowerian programs of its era. Superman was, after all, fighting not only for truth and justice, but also for "the American Way." Instead of super-villains like Lex Luthor, Superman's foes were more likely to be communist types, and ironically enough union activist Robert Shayne, the actor who played Superman's ally Inspector Henderson of the Metropolis Police, was during its run subpoenaed to appear before The House Un-American Activities Committee and nearly lost his role were it not for members of the cast and crew who rushed to Shayne's defense.

A wonderful example of this very '50s tone is "The Atomic Captive," a Cold War masterpiece. After Russian fifth columnists fail to bring back a Russian-immigrant nuclear scientist (and loyal naturalized American citizen), Daily Planet reporters Jimmy Olson (Jack Larson) and Lois Lane (Noel Neill) drive out to the desert to interview him. However, the scientist is dying of radiation poisoning, and so "hot" his mere touch is likewise fatal. Jimmy and Lois rush in, and naturally ignore his pleas not to go near him, each pawing the man with reckless abandon.

When the scientist tells them they've just given themselves a fatal dose of radiation, all Jimmy can do is turn to Lois and say, "Golly Miss Lane, I guess we're done for." Making matters worse, they then drive out into the desert, taking a short cut through "ground zero" at a nuclear test site, wrongly figuring they wouldn't possibly reschedule that H-Bomb test they had flown out to cover in the first place. Well, they were wrong, and take the full force of a nuclear blast, just like Glenn Manning in The Amazing Colossal Man. How does Superman save the day? You'll have to tune in for yourself.

This complete lack of common sense on the part of Lois and Jimmy is used throughout these later seasons, apparently as a kind of shorthand to propel the narrative forward without the need for lengthy (and logical) character motivation. In "The Perils of Superman," an imposing man in a lead mask (Michael Fox) shows up at the Daily Planet to grimly announce that he's devised fiendishly imaginative means to "liquidate" Lois, Jimmy, Clark, and Planet editor Perry White (John Hamilton). Within a minute or two after he leaves, Lois and Perry are blithely off to a meeting, business as usual. It's no surprise then that they're kidnapped the minute they get into Lois' car. Then again, if nothing happened to them, there'd be no show.

Adventures of Superman: The Complete Fifth & Sixth Seasons in Full Color is presented in its original full frame format with episodes of varying quality. Opening titles on all shows tend to look awful, but the episodes themselves generally are very sharp with bright, super-saturated hues reminiscent of early two-color Technicolor. The series used the same shots of Superman leaping out of windows and in flight over-and-over and these modest effects were probably never color-timed with the new footage, hence they tend to stick out like sore thumbs. The mono audio is okay, with optional subtitles in French and Spanish.

The only extra is Superman's Pal: Jimmy Olson, a brief tribute to Jack Larson's charming performances throughout the run of the series. He's interviewed once again, as are Noel Neill and Superman historians Jim Beaver, Gary Grossman, Michael J. Hayde, and Jan Henderson. There's no mention of Reeves' untimely death anywhere on the discs, or anything about the various aborted attempts to revive the series in some form in the years that followed.

Though the Adventures of Superman's scripts leave all logic at the door, stories in these last 26 episodes are pleasingly close in spirit to the light-hearted tone of that era's comic books. Neill's hair becomes almost phosphorescently orange and both Reeves and Larson have fleshier features, with Reeves' hair a little grayer and thinner, and Larson no longer the 19-year-old youth he was when the show began, but the youthful excitement that still greets the show remains unabated.