So said the ads in 1978. That was the year the world saw the release of Superman: The Movie, starring a fresh new face as Superman, Christopher Reeve. Now, even after the release of Bryan Singer's excellent Superman Returns, Reeve is still considered the definitive Superman. But back in 1978, no one even knew if a Superman franchise could stand on its own two feet.

The story should be familiar by now. Superman is Kal-El, the son of a Kryptonian named Jor-El (Marlon Brando), who sent Kal into space as Krypton was destroyed by its own sun. Little Kal lands in America's heartland, where he's raised to have decent values by Jonathan and Martha Kent (Glenn Ford and Phyliss Baxter). After Jonathan's death, Kal, now Clark, leaves to learn of his heritage, and through Kryptonian technology builds an ice fortress in the North Pole, where holograms of his real father teach him who he is. At the end of it, Kal-El is a full grown man (Christopher Reeve), who heads to the city of Metropolis to work as a reporter at the Daily Planet. There he meets headstrong reporter Lois Lane (Margot Kidder), and reveals himself to the world by saving her from a helicopter crash. Lois is immediately smitten with Superman, and he is also taken with her. Meanwhile, the villanious Lex Luthor (Gene Hackman) is planning a devious plot and he knows Superman stands in the way, so he schemes to take him out.

If that sounds like a lot, well, it is. But it's to director Richard Donner's credit that the film never feels overly long. This is due in part to an excellent script, assured direction, and fantastic performances. First among equals is Christopher Reeve. There are only a few breakout performances in film history that can equal Reeve in Superman. As the title character, Reeve is the embodiment of the straight and narrow, with shoulders back, chin high, and a haughty look (with just a hint of a smile), Reeve made Superman human. No actor before or since has laid claim to the role in the way Reeve did with this one. And as Clark Kent, Reeve did a complete 180, playing a gentle, naive farmboy who has just come to the big city. His entire physicality is different, as is his tone of voice. There's one scene in particular where he removes his glasses and stands tall, and you can see the transformation in front of your eyes. Later in life, Reeve would become a real life Superman after an accident left him paralyzed from the neck down. Never letting himself become a victim, Reeve continued to act in parts tailored for him, as well as champion programs that sought cures for paralysis and other debilitating conditions. Watching him in this film, it's easy to see how he had the fortitude it took to overcome his disability.

But Reeve wasn't carrying this film by himself. Marlon Brando lends a sense of gravitas to the film as Jor-El, Superman's father. In a role both majestic and tender, Brando overcomes some of the silliness of his lines ("I tell you, this planet will explode in 30 days!"), and delivers some wonderful moments as only he could. On the other end of the spectrum is Gene Hackman, who plays Lex Luthor mostly for humor. Granted, he is very funny, but his performance misses the real threat that Luthor poses, something Kevin Spacey would correct in Superman Returns. We also have Margot Kidder as Lois Lane. Now, Kidder might not be the prettiest girl on the block, but she has the diffident attitude that it takes to play Lois Lane successfully. One can see why Superman lusts after her. Like a wild buck that needs taming, she is headstrong, willfull, and has enough smarts to make it in a man's world. Kidder brings out all of that, and the film is better for it.

The interplay between the characters is also a vital part of the film. The script isn't above having a little fun with itself, and Reeve, Kidder, and Hackman all do a great job of balancing the humor and the drama. Take a look at the scene where Clark first meets Lois, and you'll find sly turns of phrase and subtle innuendos just about everywhere.

But what would a Superman movie be without big disasters and special effects? Not much, which is why this movie is jam-packed with them. The aforementioned sequence where Superman reveals himself to the world by saving Lois from a crashing helicopter is probably one of the most iconic moments in all of American cinema. And that's just the start. Earthquakes, breaking dams, heck, Superman even makes the world rotate backwards for a few moments. While some of the effects may seem dated, they don't detract from the overall experience.

And this is due to the fantastic direction of Richard Donner. Donner purposely conceived of the film as a little slice of Americana, and he gives the whole production a strong sense of direction. Everything feels like it has a purpose, even the seemingly non sequiter opening sequence where Jor-El condemns three criminals. Without Donner, the film would have fallen apart under its disparate elements. But he binds them together and makes the picture the classic it is, one of the true greats in modern American cinema. 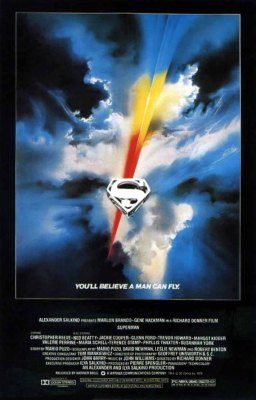 The Image:
Warner Bros. presents Superman: The Movie in its original aspect ratio of 2.40:1, with a 1080p VC-1 encode. Donner shot a lot of Superman with diffusion, probably to keep the mythic feel of the story. The result is that most of the picture is soft. It doesn't help that a lot of 70's film stocks tended to err towards the softer, grainer side of the film spectrum. The end result is that most of the film looks like a very good upconverted DVD. Granted, I could see certain details I never could before, and there are some close-ups in Luthor's hideout that are clearly a cut above standard definition, but most of it will probably look disappointing to fans of HD. Now, let me say that it's clear that the look of the film is intended, and we should commend Warner for giving us a transfer that correctly brings that look to the screen. That being said, I predict many people will find this transfer to be subpar.

The Audio:
The version of Superman featured on this disc is the 2000 restored edition (aka the director's cut), which first surfaced on DVD in the original Superman box set. At the time, the audio on that release garnered some controversy over re-recorded sound effects that didn't sound like they were of a piece with the rest of the audio in the film. I had heard that the new editions of Superman: The Movie would not have such glaring aural contradictions. However, as far as I can tell, what we get on the HD DVD is simply a higher bitrate, Dolby Digital Plus version of the soundtrack from the previous release. So purists can pull out their torches and pitchforks again. For my part, I don't have too much trouble with the soundtrack. Actually, the sound effects didn't bug me as much as some apparent distortion in the dialogue in the early sequences, where syllabants came across too harshly. As a surround track, though, this one is a keeper, with the glorious John Williams score (the best of his career) filling every speaker, and the big effects sequences getting full justice.

The Extras:
To date, HD DVD fans have been able to hold their heads high and proclaim that HD DVDs have had all the special features of the DVD releases (movies released in special editions by Criterion notwithstanding). However, a few recent releases have tarnished this sterling reputation, as first King Kong (2005) and now Superman: The Movie fail to port over all of the DVD features. Let's take a look at what we do have:

First is a fantastic commentary with director Richard Donner and creative consultant Tom Mankiewicz. Richard and Tom keep the track lively, mixing facts with a decent amount of humor. This commentary is a port from the 2000 DVD, but is not only worth hearing for newcomers, but worth hearing again for people who haven't heard it since its original release. I know I enjoyed it just as much as I did the first time.

Next is a pair of documentaries, "Taking Flight: The Development of Superman" and "Making Superman: The Filming Of A Legend." Both are just over half an hour in length, and go into great depth over all the aspects of production, from before Donner was involved to his disputes with the Salkinds afterwards. Both are excellent, informative, and never boring.

We also get to see some rare screen tests, mostly of Christopher Reeve, but also of several woman trying out for Lois Lane. Similar screen test footage appears in Superman II: The Donner Cut.

A music-only track in DD+ highlights Williams' fantastic score for the movie. Watching it with only the score, it's interesting to see how well the action sequences work without any dialogue whatsoever.

Finally we have theatrical trailers and a TV spot. These trailers caused quite a stir when they were first shown, even though they seem embryonic now.

It's clear this HD DVD is a port of the original DVD release, not a port of the concurrent 4-disc release. Even so, this disc is missing a few features that were present on the previous release, including additional music cues, some text extras such as cast/crew bios, and the biggest ommission, a feature on the film's effects. It's a shame that such an important film as Superman would debut on HD DVD without even all of the extras of a 5-year old DVD release.

The Conclusion:
Superman: The Movie is a 70's classic, as much as Taxi Driver, The Godfather, or Rocky. It has a timeless appeal that only grows with repeated viewings. Christopher Reeve is Superman, and the rest of the cast shine in their respective roles. The HD DVD sadly cuts away some supplements found on the DVD releases, and features none of the new content from the 2006 4-disc release, including the theatrical cut of the film. Because of this, I can't give this film a Collector's Edition rating, but it is still a vital, must-see film. Because no matter how many years down the line, no matter how hokey the effects may become, when you watch Superman, you believe that a man can fly. Highly Recommended.