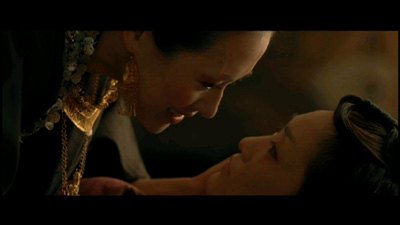 Something's rotten in the Ten Kingdoms...

The Banquet, the new film from director Feng Xiaogang (World Without Thieves), is a loose adaptation of Hamlet set just after the fall of the Tang Dynasty, in a period of political confusion called the Period of Five Dynasties and Ten Kingdoms. It's a lush costume drama, full of compelling performances and exceptionally lavish art direction. The result is something more than a Shakespearean adaptation, transcending the material to create a motion picture that feels indigenous to the country it hails from (a la Untold Scandal, Je-yong Lee's Korean version of Dangerous Liaisons).

Daniel Wu (One Night in Mongkok) is Lu Wan, the crown prince of China. He has left the royal court to study acting at a remote, monastery-like theatre. His retreat was prompted by the heartbreak of his father marrying his sweetheart, Little Wan (Ziyi Zhang, House of Flying Daggers). Karma's a bitch, however, and dear ol' dad meets an untimely end by a random scorpion bite while he is napping. As far as most people have seen, there aren't scorpions in the palace, but it's also the common belief that anything can be found within its walls, so no one really questions it. With the throne vacant, the Emperor's brother, Li (Ge You, To Live), has taken command and also set his sights on the Empress. The first of many attempts on Lu Wan's life draws the prince back home, set on revenge.

The transformation of Hamlet's mother into a stepmother, as well as an ex-lover, is an interesting one. It cranks up the Oedipal overtones to a boiling heat. The Ophelia stand-in, Qing (Zhou Xun, Balzac and the Little Chinese Seamstress), who was scheduled to marry the prince one day, gets caught in the middle, bearing the brunt of Lu Wan's scorn for his stepmother and the Empress' jealousy over the things she has lost. Really, in The Banquet, it's Empress Wan who takes over the movie, more Lady Macbeth than Queen Gertrude. Prince Lu Wan is more of a cipher than a catalyst. Robbed of Hamlet's inner monologue, he is buffeted by fate and the machinations of others. He's still the axis around which the rest of the players spin, but at times he seems to be serving that role a little too well, standing still while the story moves on. As an actor now himself, he performs in his own play within the play, but he isn't one of the principal cast members, he merely bangs the drum that sets the rhythm of the piece. Lu Wan is more prop master than dominating lead.

This leaves Empress Wan to move the story elements around the castle. Ziyi Zhang never has a moment onscreen when she isn't thinking. Even as others make their plays and she hangs back, you can see that she is listening, plotting, waiting. In every scene she is in, Ziyi makes you wonder what the monarch's motivation really is. Is she merely playing along with Li to survive? Is she angling to rule alone? Does she actually have the prince's best interests at heart? It's a stand-out performance, with the bulk of it centered on the actress' face. Her body is covered in encompassing robes, her posture is regally stiff, so she mainly has to work from the neck up. This makes each subtle twitch oh so important, and I couldn't take my eyes off of her. As an actress, Ziyi just gets better and better. After 2046 and Jasmine Women, I'm starting to think she can do no wrong. (Well, as long as she stays out of Hollywood. Thank you very much, Rob Marshall!)

Of course, Hamlet would not be Hamlet without some swordplay, and there are several fight sequences in The Banquet. They are staged in the wuxia style, with balletic leaps in the air and dynamic clashes between blades. In using the same look for small scale violence with a more focused target, such as the execution of a General loyal to the deceased Emperor or Lu Wan's attack on Qing, the poetic beauty of the brutality is unsettling. Strangely, it is not nearly as effective in the more complex battle sequences. Perhaps if everything wasn't done in slow motion, we might feel the savagery of the fighting more. In fact, if The Banquet has one flaw, it's that it's too dispassionate. For a movie about revenge, it's awfully austere. At some point, one of these people has to get a little pissed off and let a hair fall out of place. This is, after all, a story that ends with a bloodbath. 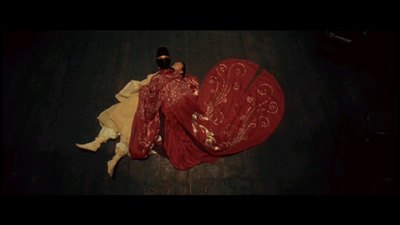 Then again, that could be the director's intention. The members of the royal court are so divorced from the dirty reality of the world, they aren't capable of honest-to-goodness rage. The filthiest deaths come when an entire cadre of imperial guards are required to commit ritual suicide. Their blood flows over a mossy bridge, staining the wood, sullying the river below. These are real people, the common men that fill the ranks, and their demise comes far away from the opulent banquet hall where Emperor Li throws his final party. The art direction in the movie was overseen by Timmy Yip, best known as the designer for Crouching Tiger, Hidden Dragon, and his sets for The Banquet are amazing. Everything is built with open spaces and high ceilings, as if the world is much larger than the beings that inhabit it and they'd do well to remember it. Conversely, their gorgeous costumes cover so much, they are restrictive, outward illustrations of the personal plots they keep hidden. Thus, when Lu Wan and Qing try to confront the injustice head on, they are stripped down to basic white robes. This use of costumes as emotional devices culminates in a glorious overhead shot where Ziyi Zhang's splendid red dress fans out on the floor in the shape of a broken heart.

Despite any quibbles over the coldness of the film, the conclusion of the picture packs a real punch. Feng Xiaogang makes the right choice in going with ambiguity for his closing scene. If we're not going to be privy to what exactly some of the characters were up to, so too should we be left slightly on the outside for how it all wraps up. The result is that as the credits roll, The Banquet becomes a haunting presence all unto itself, just like the Emperor whose murder has put all the wheels in motion. Rather than simply click off the TV and forget the bad things that went down, the residue of the selfishness and betrayal lingers in the viewer's mind.

Video:
The production values on the import DVD of The Banquet are nearly as high as the movie deserves. Presented in anamorphic widescreen, the colors are rich and beautiful, capturing the extreme reds and greens. For the most part, the DVD maintains strong shadows and the darkness of the halls of political intrigue, but at times, this is where the picture can go soft, with the blacks not being as deep as they could be.

Sound:
Two different Mandarin Chinese mixes: 2.0 and 5.1 DTS. The sound in this movie is exquisite. Tan Dun wrote the score, and the grandiosity of the music rumbles out of the speakers; at the same time, the mixes don't miss the fantastic sound effects that give the movie so much atmosphere, like the faint ringing of metal that lends a feeling of foreboding to a scene where Lu Wan contemplates the fate that befell his father.

I'm also happy to report that the English subtitles are really very good. I had trouble keeping up with them once or twice, but otherwise, they are well-written and mainly error free. 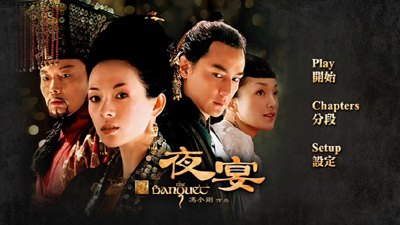 Extras:
All of the extra features come on a second disc, separate from the movie. As per usual with Asian imports, however, if you don't speak Mandarin, they aren't going to do you a lot of good, as there are no English subtitles. If you are curious, here is what is on the disc:
* A fifteen-minute making of, with behind-the-scenes material and interviews
* Fifteen more minutes of behind-the-scenes features on different production stages
* Eight one-minute interview features with cast members, with Ziyi Zhang taking up three of them
* A promo trailer made for Cannes (seven mins.), a shorter trailer, and three television commercials
* Visual galleries of stills and promotional materials

In addition to the galleries, one feature where you can kind of get around the subtitle issue is the "40 Min. Behind the Scenes." I've seen this kind of documentary on other Asian discs. Essentially, it's footage from the complete production, from the opening ceremony through prep, rehearsal, and filming, all the way to the wrap party. Most of it is set to music, and if you just want to watch the what goes on in the making of a movie, you'll enjoy the raw footage. There are still some talking bits you'll miss, but this program is more reliant on visual information than spoken information.

The disc also comes in a nice slipcase.

FINAL THOUGHTS:
Recommended. Be you a fan of films re-envisioning Shakespeare or opulent costume dramas, The Banquet gives you plenty of cinema to feast on. A beautiful production with a standout performance by Ziyi Zhang, I'm glad the production company saw fit to give it an equally beautiful DVD transfer with only very minor issues. This is one of the best import discs I've seen in a good long while. Too bad we yet again aren't getting subtitled bonus features, because then we'd have an all-around winner of a DVD package. 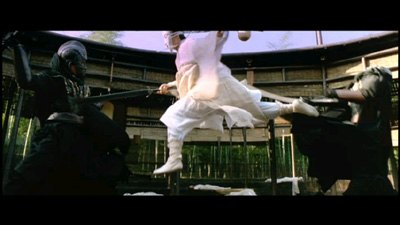