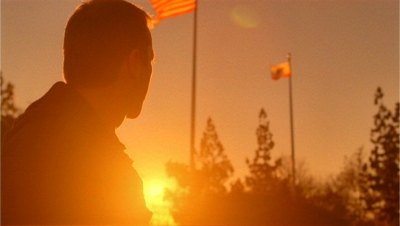 It's not something I'm fond of admitting, but I've never caught a single episode of Joel Surnow and Robert Cochran's 24 on TV. Not one. In fact, if it weren't for the constant "Fox News" plugs during every other episode, I probably wouldn't even know what channel it aired on. Thanks to the convenience of DVD, I was converted to a fan of the nail-biting series a few short years ago, and I haven't looked back since. 24 is simply one of the most addicting shows you'll find on network TV (or digital cable, for that matter), combining an irresistible real-time premise with layered characters, emotional drama, potent action sequences and never-ending cliffhangers. Simply put, every episode feels like a season finale.

Having first been intrigued with 24 after reading the kinetic Season 1 DVD review by our own G. Noel Gross, it didn't take long for yours truly to make a purchase. It did, however, take a few months for me to eventually watch it; having been forewarned of the show's addicting formula, I planned to delay the marathon until my schedule cleared up a bit. After an unexpected week-long break arose during the holiday season, I devoured the first boxed set in roughly five days. Since then, I've looked forward to the annual 24 DVD block each and every year---and though I could easily catch it on TV, something tells me I couldn't handle the constant wait every week.

After four successful seasons of groundbreaking material (including the underrated Season 3), most fans didn't think that Surnow, Cochran and company could keep the momentum going for a fifth time. We were pleasantly surprised as the clock ticked away, weaving through the well-paced plot, unpredictable twists and surprisingly little filler. Sure, the familiarity of Jack Bauer (Kiefer Sutherland) and his constant struggle with terrorists, betrayal, covert operations and government intervention proved familiar, yet 24 seemed as fresh and energetic as ever. It's not often that a popular and critically acclaimed series manages to top itself after four solid years, but this is pitch-perfect programming from start to finish. It's not without a few convenient plot devices and gray subplots---including a few scenes with the junkie sister of acting CTU director Lynn McGill (Sean Astin)---but let's look on the bright side: there's no cougar traps, paranoid guys in bomb shelters, liquor store robberies or bouts with amnesia. 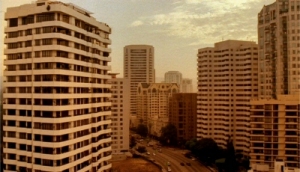 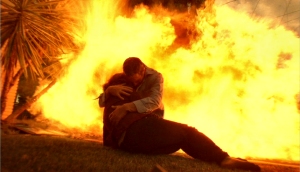 Another reason why Season 5 works so well: the threats are more formidable and varied than ever, even though a few are slightly borrowed from earlier seasons. This time around, terrorists have acquired a collection of Sentox nerve gas, though how they were acquired remains a mystery for some time. Strategically placed in and around the Los Angeles area, these canisters of gas pose a threat to CTU and the general public many different times throughout the day. The returning President Richard Nixon Charles Logan (Gregory Itzen) proves to be an interesting leader in his own right, appearing cowardly, sympathetic, vengeful, optimistic and unpredictable as the tragic events unfold.

The President's better half, Martha Logan (Jean Smart), also adds an interesting element to the story, as her moral convictions and "paranoid delusions" seem to be loosely based on Nixon-era whistleblower Martha Beall Mitchell. Perhaps the best of the bunch, though, is former federal agent Christopher Henderson (Peter Weller), a complex "patriot" who proves to be a formidable threat to our hero. Thankfully, Henderson isn't just a psycho laughing behind a wall of monitors; he develops into a layered and memorable character, despite his limited screen time.

The unpredictability increases as major characters are killed off---in fact, two are gone in the first 15 minutes, with several more as the clock ticks away. One is especially moving, despite the character's relatively short history with the series. Moments like these prove that 24 isn't always about explosions and chase sequences; there's a real heart underneath, ensuring that we care for certain supporting characters as much as we root for Bauer himself. Speaking of our hero, his "Terminator" status is still in full effect: Jack Bauer escapes death more times than we care to count, balancing his own moral agenda with his former duties as a CTU field agent. The stubborn, durable nature of his character ensures that Season Five won't be his last year; in fact, Sutherland recently signed on for three additional seasons of the series, not to mention a 24 feature film. Long story short: he'll be around for a while. 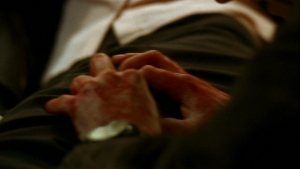 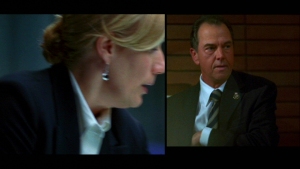 As with other seasons, the gripping nature of the story is almost frustrating at first: we know there are plenty of twists and turns ahead, we just have to wait patiently for the story to unfold. From 7:00 am to 7:00 am, the 24 hours that comprise Season Five truly are the most consistent in recent memory. There isn't a bad episode in the bunch---and though a few episodes occasionally deviate from the main storyline, they're all completely salvaged by the top of the hour. All things considered, it's as perfect as TV gets these days and deserving of its five-star rating.

Presented on DVD by Fox Home Entertainment, 24 continues to be a perfect fit for home viewing on modest setups or full-blown home theaters. Those who haven't yet seen this latest season can finally do so at their own pace, while those who enjoyed it on TV already should appreciate the faithful technical presentation and entertaining bonus features. It's a perfectly well-rounded package in all departments, though fans of the series should expect nothing less.

As with past seasons, 24 has been presented in its original 1.78:1 widescreen aspect ratio and looks fantastic. The anamorphic transfers preserve the series' stylized but natural color palette, while only the darkest of scenes tend to be a bit on the murky side. Digital problems (such as edge enhancement and pixellation) don't seem to be an issue at all, rounding out the visual presentation nicely. The audio is presented in an energetic Dolby Digital 5.1 Surround mix (also available in Spanish 2.0 Surround), boasting immersive action sequences and subtle atmospheric touches during quieter moments. Dialogue sounds clean and clear, but the strong dynamic range ensures that explosions and gunfire also pack quite a punch. Optional English and Spanish subtitles are provided during the episodes only.

Seen below, the menu designs are a bit too "tech-heavy" for their own good, but the navigation is easy to get accustomed to. Each 42-minute episode has been divided into 12 chapters (with a handy "Play All" option on each disc), while no apparent layer changes were detected during playback. The actual packaging was not included with this screener copy, so it's uncertain whether they're sticking with the original gatefold packaging or switching to the preferred slim case and slipcover combo. If the retail version is provided, this section will most certainly be updated. 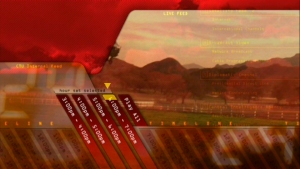 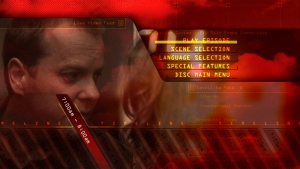 The remainder of the extras are confined to Disc 7 and continue 24's trend of insightful extras presented in a professional manner. Leading things off is a Season 6 Teaser (11:41) sponsored by Toyota---and while there's plenty of interesting story development here, a portion of it looks suspiciously like a car commercial. Also included is a brief Trailer (0:44) for the upcoming season, scheduled to premiere on January 14th, 2007 as a two-night, four-hour event.

Things pick up nicely from here on out, as we're treated to four production-related featurettes that don't overlap much with the commentaries. First up is "Supporting Players" (20:26, below left), a series of interviews with the semi-regulars and their experiences on set. A few also manage to plug their off-camera hobbies, which include folk music recording, motivational speaking, stand-up comedy, teaching yoga and more (you'll have to figure out who does what for yourself). Up next is "Unsung Heroes: The 24 Camera Department" (40:11, below right), which follows some of the camera operators as they shoot several key scenes from Season 6. It's a bit more technical than most of the other featurettes, but there's some good explanation of how 24's look is achieved. 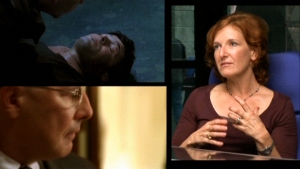 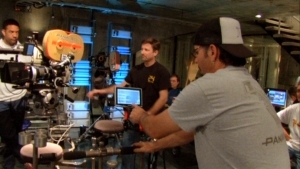 Also here is "Music by Sean Callery" (9:47), a short piece with the composer and a tour of his studio. We also get to see a key Season 5 scene overlapped with different musical themes to alter the mood. Last but not least is "Logan's Retreat" (5:54), a brief tour of the presidential set---amazingly enough, built entirely on stage---and how many of the props were designed or acquired.

We're also treated to a nice collection of Deleted and Extended Scenes (23 clips, 38:50 total), presented with optional commentary by writer/producer Stephen Kronish and editor Scott Powell. Most of these are very minor moments---phone calls and private conversations, for example---and seem to have been cut for time, not content. Elisha Cuthbert fans will be glad to see one scene in particular, which was scheduled to be her first appearance of the season but was dropped to make the eventual "reunion" more effective. Kronish and Powell do a good job explaining why these scenes didn't make the cut during their optional audio commentary, though there are frequent gaps during lengthier clips of dialogue. If you prefer, these additional scenes can also be accessed during their respective episodes by way of a convenient subtitle option on the "Special Features" menu. All are worth watching at least once.

The bonus features close out with an 100th Episode Reel (7:14), basically a highlight montage from all six seasons; as well as a "24: Behind the Scenes" Book Sample (0:52). The latter includes a few comments from Jon Cassar, immediately followed by a brief gallery of behind-the-scenes photos from the book (in stores now). All extras are thoughtfully presented in 1.78:1 anamorphic widescreen, though they don't include optional subtitles or Closed Captioning support.

As if it weren't painfully obvious by now, 24 on DVD is about as irresistible as the medium gets. This fifth season is perhaps the finest yet, boasting strong performances, tight direction and enough suspense to satisfy the most hardened action junkies. The DVD presentation by Fox Home Entertainment supports the series perfectly, boasting a top-notch technical presentation and a solid assortment of bonus material. Those new to the world of 24 are strongly encouraged to start from the beginning, but everyone else should consider this release a no-brainer. Highly Recommended.

DVD Talk Review Link: Previous seasons of 24
Randy Miller III is an affable office monkey based in Harrisburg, PA. He also pokes away at freelance graphic design projects and works in a local gallery. When he's not doing that, he enjoys slacking off, second-guessing himself and writing things in third person.