Panorama // Unrated // October 9, 2006 // Region 3
List Price: $15.95 [Buy now and save at Hkflix]
Review by Stuart Galbraith IV | posted January 1, 2007 | E-mail the Author
Finally! After several years of inferior masters, Hong Kong's Panorama label appears to at last coaxed Japanese licensor Shochiku to provide them with good masters. Tora-san, the Expert (Otoko wa tsuraiyo - Hana mo arashi mo Torajiro, or "It's Tough to Be a Man - Flower and Storm Torajiro, 1982) is the first "Tora-san" movie released anywhere in the world with both English subtitles and a 16:9 enhanced transfer. And what a glorious transfer it is! As for the film, the 30th installment in the long-running (48 features made during 1969-1995), it's also well above average thanks to an especially good performance by Yuko Tanaka (Hibi, The Exam), one of the best of the entire series. 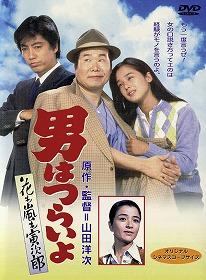 Tora-san heads for a hot springs resort area in Kyushu, where he meets a timid zoologist, Saburo (Kenji Sawada) whose late mother years before had worked at the inn where Tora-san is now staying. At Tora-san's urging they hold a special Buddhist service for the fondly-remembered lady, during which Tora-san's bumbling brings the solemn scene crashing down in an especially funny scene. Also staying at the inn are two pair of young women on vacation, co-workers at a Tokyo Department store. One of them, Keiko (Yuko Tanaka), is as attracted to the inarticulate Saburo as he is to her, but both are far too shy to express their common interest.

In desperation and in the tradition of Cyrano de Bergerac Saburo, unaware of his new friend's disastrous track record with women, asks Tora-san to help him win Keiko's heart.

Tora-san, the Expert's story isn't new; it's quite similar to several other entries, notably Tora-san Plays Cupid, 1977), but the appealing leads add new wrinkles to the familiar material. Kenji Sawada had been a huge pop star, first as a member of The Tigers (whose members also included future actor Ittoku Kishibe) and later as the star of such films as the much-underrated The Man Who Stole the Sun and, more recently, The Happiness of the Katakuris). The pre-credits dream sequence, which had by this time become a highly-anticipated, regular part of the series, here features Sawada in a role more familiar to Japanese audiences, as a swaggering, singing gangster in a sequence that spoofs movies like West Side Story. As Saburo Sawada's just fine, and there's a heart-breaking irony in Tora-san's assistance - Saburo may be shy and bumbling like Tora-san, but his handsome features put him at an enviable advantage over the comically square-faced Tora-san.

The picture's real surprise though is actress Yuko Tanaka and screenwriters Yoji Yamada (who also directed) and Yoshitaka Asama's inspired characterization. Like Saburo she's quite attractive and desires an idealized husband, but her cripplingly low self-esteem puts her in the self-defeating position of refusing to accept that anyone as kind and handsome as Saburo could ever find her desirable. This is superbly realized by Tanaka, who creates a character of delicate fragility, one that recalls Terumi Niki's similar self-loathing character in Kurosawa's Red Beard. Tanaka was nominated for a Japanese Academy Award for her performance in this and Amagi Pass, though lost to Rumiko Koyanagi. (However, star Kiyoshi Atsumi won a Blue Ribbon Prize as the year's Best Actor.)

The authenticity of the Saburo and Keiko's romance was reflected in a somewhat scandalous offscreen romance, in which Sawada eventually left then-wife and retired pop star Emi Ito (of The Peanuts, famous as one-half of Japanese monster Mothra's tiny priestesses) for Tanaka some years later.

Beside the cast of regulars, Japanese film fans will enjoy spotting cult actor Taiji Tonoyama as a Buddhist priest, Akira Hitomi as a jealous husband, and Senri Sakurai as an amusement park ride operator, the latter two becoming series regulars themselves about this time.

Tora-san, the Expert is presented in a splendiferous 16:9 transfer that makes the movie look almost brand-new. There's virtually no age related wear or damage, and the color and sharpness are dazzling after 29 previous DVDs with indifferent to mediocre unenhanced transfers. The image is presented in its original Panavision screen shape, about 2.35:1. The English subtitles are good, not excellent. The original mono audio is likewise clear though it requires an inordinate amount of amplification. Optional Chinese subtitles are also available.

This is a better-than-average Tora-san made much more enjoyable by a superior transfer that hopefully will become the standard for the rest of the series. Highly Recommended.