Panorama // Unrated // June 6, 2001 // Region 3
List Price: $14.95 [Buy now and save at Hkflix]
Review by Stuart Galbraith IV | posted January 6, 2007 | E-mail the Author
While it's nice to see cult Japanese genre directors like Kinji Fukasaku and Seijun Suzuki so well represented on DVD, other arguably much more important postwar filmmakers have, up to now, been criminally neglected by western world DVD labels. Directors as monumental as Mikio Naruse, Shiro Toyoda, and Tadashi Imai, to name but three have been sorely neglected. Another writer-director regarded as one of Japan's best was Keisuke Kinoshita, whose only film available on DVD in the west so far is Twenty-Four Eyes (1954), and that's only in the U.K. As it happened, Kinoshita died in 1998 shortly after the death of colleague Akira Kurosawa and soon thereafter books and film magazines were published in Japan jointly paying tribute to these cinematic giants. That Kinoshita was given almost equal weight in these publications speaks volumes of how highly he was regarded in his homeland. 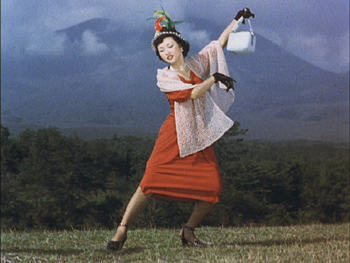 One of Kinoshita's best-known films is Carmen Comes Home (Karumen kokyo ni kaeru, 1951), a very funny comedy contrasting postwar (and American-influenced) sassiness with traditional Japanese country life. It won the Mainichi Film Concourse's prestigious Best Screenplay prize and ranked fourth on Kinema Jumpo's "Best Ten" list that year, and was popular enough to spawn a sequel, Carmen Falls in Love (Karumen junjo su, 1952), also directed by Kinoshita. It's also significant in that it was Japan's first all-color feature (shot in Fujicolor, a process abandoned in favor of Agfa and later Eastman Color by most of the major studios).*

In rural Shinshu, in mountainous central Japan, word spreads that local girl Okin Aoyama, now known as "Lily Carmen," is coming back to her hometown for a visit. Having years before run off to Tokyo against her widower father's wishes, Okin has become something of a celebrity, a "great artist" and "famous dancer," so say the townsfolk, her artistry spreading "Japanese culture" to the masses. What few seem to realize is that Carmen (Hideko Takamine) is, in fact, a stripper.

She arrives accompanied by friend and fellow dancer Akemi (Toshiko Kobayashi) amid much fanfare; the townsfolk are undeniably awed if bemused by the girls' gaudy, western-style wardrobe -- she wears a flaming red dress and a hat with yellow and green ostrich feathers, while Akemi has a yellow and black striped number, something Ann Miller might've worn in Easter Parade -- and Carmen especially possesses a very un-Japanese-like boldness. (She offers speechless villagers autographed portraits, with Carmen coyly, scandalously posing half-naked.)

Though Carmen's sister, Yuki (Yuko Mochizuki) is thrilled at her daughter's triumphant return, their father, Shoichi (Takeshi Sakamoto) is more than a little embarrassed, and only humiliated further when Carmen and Akemi take to merrily prancing about in the mountains like imbecile children, their singing attracting grazing cattle and horses, their skimpy wardrobe drawing local men and schoolboys. "If that's art," says the father, "I'd rather look at horses and pigs."

Worse, the women all but ruin an annual school athletic meet (big affairs in Japan with much pomp and circumstance, even today) when scurrilous money lender Maruju (Bontaro Miyake) tries to hold Akemi's hand. She screams, disrupting a poignant song composed and performed by Haruo Taguchi (Shuji Sano), a former schoolteacher blinded during the war (and whose beloved harmonium was taken by greedy Maraju to pay off an old debt). Disgraced, the girls plot their way back into the hearts of the community: a special strip show!

The humor of Carmen Comes Home is understated and eccentric in the style of Britain's Ealing comedies of the same period, particularly The Titfield Thunderbolt, while it anticipates the structure and style Yoji Yamada's later "Tora-san" films likewise produced at Shochiku Studios. Like Tora-san, Carmen is a featherbrained, wayward adult child whose freewheeling lifestyle embarrasses the traditional family that also loves her. Like Tora-san she has a devoted, unjudgmental sister while the local community's figurehead, comically very traditional, is played in both by Ozu actor Chishu Ryu.

Kinoshita's screenplay pokes fun at the hip-swaggering Carmen and the conservative townspeople without ever criticizing either. This is best seen in Ryu's character, who at the drop of a hat likes to sing odes to his beloved Mt. Asama and whose pride in his community is so extreme that it becomes hilarious. Indeed, this is probably Ryu's funniest-ever performance.

The director uses color to contrast Carmen and Akemi's wardrobe with the muted kimono and traditional work attire of the local citizenry. It's also used to show off color in and of itself, the Shinshu scenery and whatnot, which is lovingly displayed in long tracking shots and pans. The first two-thirds of the picture were filmed entirely outdoors; very little of the picture was shot on a soundstage.

The cast of mostly Shochiku contract players are a delight, from a cast-against-type Takamine (When a Woman Ascends the Stairs) to familiar faces like Koji Mitsui (as Maruju's lackey) and Keiji Sada (of An Autumn Afternoon, as a handsome school teacher Akemi falls for).

Carmen Comes Home is presented in its original full frame format, in an unrestored transfer that nevertheless is about par with other Japanese movies from this era. The color, both in terms of its production process and age-related fading, is better than one might expect though it's still rather odd, almost like an early two-color Technicolor film from the early-1930s. The English subtitles are adequate, as is the original mono audio. Optional Chinese subtitles are also available.

As usual with Panorama's Shochiku titles, supplements are limited to a small booklet and onscreen director's biography and filmography (in both Chinese and English).

Carmen Comes Home is a slight but utterly charming film, available at last with English subtitles, and a must for anyone interested in classic Japanese cinema. Highly Recommended.