On a secluded Mediterranean island, far from civilization, Georgio (Marcello Mastroianni) has found peace. Together with his dog Melampo the once proud Parisian now lives a life devoid of excitement -- long walks on the beach, a few hours spent on his drawings, as well as plenty of fishing is what keeps Georgio busy.

During one of his mandatory trips to the beach Georgio encounters Liza (Catherine Deneuve), a beautiful woman who has voluntarily left the luxurious yacht of her snobbish friends. After a short introduction the couple heads back to Georgio's place where they will eventually begin a most unusual relationship.

Based on the novel by Ennio Flaiano La Cagna a.k.a The Bitch (1972) is Italian director Marco Ferreri's first French-language film. Completed only a year before Ferreri's controversial Le Grande Bouffe (1973) the story of La Cagna (in France the film premiered as Liza) follows the deeds of two lovers as they become entangled in a controversial web of sadomasochistic games evoking comparisons with Barbet Schroeder's Maitresse (1976).

La Cagna however certainly lacks the consistency and dramatic epilogue Maitresse offers. Both Liza and Georgio are focused on finding a way of prolonging their escape from reality, while suffering and humiliating each other, where as in Schroeder's film sadomasochism is by large a product of reality, a sexual fantasy meant to keep the main protagonists attached to the society Liza and Georgio have fled. Described by film historian Adriano Apra as a natural extension of Ferreri's provocative Dillinger e Morto (1969) this is also a film full of utopian symbolism where colors, images, and words often contradict each other.

There is a notable literary reference in La Cagna as well. After Liza kills Georgio's dog, who as it appears has been given exactly the same name as Pinocchio's pet - Melampo, she quickly assumes his position and begins to serve her master. Deneuve's character wears a leash, eats from Georgio's hands, and submits to his most primal desires. She becomes la cagna (bitch)! So, is it a coincidence that Ferreri chose to substitute an animal with a human being? I don't think so! There is a hidden message here that leads straight to the heart of what this film is all about: a cynic form of protest against the conventional.

Ultimately however La Cagna remains a film of confusing sequences. Georgio's controversial trip back to Paris to see his dying wife (the only piece of reality providing the viewer with a glimpse of his previous life) is unexpected. He meets an old friend (Michel Picoli) who questions his credo as well as his courage to withstand adversity (read self-chosen isolation). Is Georgio strong enough to finish what he has started? 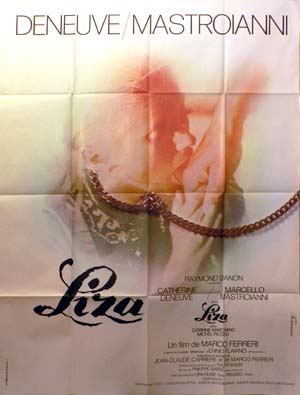 Presented in its original aspect ratio of 1.78:1 and enhanced for widescreen TV's La Cagna has been digitally restored by Italian distribs MINERVA for their marvelous line of classic Italian cinema. While the results are not as impressive as MINERVA's previous releases this is nevertheless one very good looking print: contrast is by large very well handled, colors vary from intentionally soft to vivid, print damage aside from a few very minor specs has been addressed perfectly. My only complaint here is that a few times I noticed some very minor flicker which I am going to assume the Italian producers were not capable of removing. I don't think this will bother anyone as it only occurs during selected scenes in the beginning (and towards the ending) of the film.

Presented with an Italian mono track La Cagna sounds very well. The dialog is clear and easy to follow and I could not detect any issues of concern that we should discuss here. This being said, I would like to make very clear that what this disc offers is indeed the Italian version of La Cagna hence the dialog is entirely in Italian. As Ferreri filmed his feature in French the Italian distributors had dub the film in Italian after its initial release. The adjustment was personally supervised by Ferreri and from what film historians point out the director was satisfied with the results. With optional English (white) subtitles.

During the last year I was very impressed with MINERVA's lavish packages as they are virtually of Criterion quality when it comes to extras. All of the recent Italian releases are designed entirely in English (Italian sections are preserved) and it truly is a pleasure to own these.

La Cagna offers two interviews: one with film historian Adriano Apra and one with the director of photography Mario Vulpiani (both with optional English subtitles). While the Vulpiani interview is not truly revealing of the film's message the one with Mr. Apra is simply outstanding. The film historian deconstructs the La Cagna in a manner that perfectly explains what led Ferreri to his decision to film Flaiano's book, how the film was put together (there are some great comments about the ongoing at the time affair between Deneuve and Mastroianni), the political message behind the picture, how the film's compares with Ferreri's previous work, and finally what the unusual relationship between the main protagonists truly represent. This is indeed one spectacular analysis which as far as I am concerned is just as fascinating as the film is.

The obligatory 12-page booklet by MINERVA is just as impressive (entirely in English). There is a great introduction by Bruno Di Martino that further sheds light on the history behind La Cagna and the collaboration between Deneuve and Mastroianni. Next, there is a short anthology from Michelangelo Buffa published in FILMCRITICA of October 1972 which talks about the murder of Gerogio's dog Melampo and the role Liza consequently assumes. Next, there is a second short article by Ermano Comuzio from CINEFORUM published in April-May of 1972. Finally there are extracts from other works dedicated to the work and life of Marco Ferreri also presented entirely in English.

An interesting adaptation of Ennio Flaiano's book La Cagna has been given a deserving treatment from Italian distribs MINERVA. The film rivals the visual and quirky spirit of Lina Wertmuller's body of work while at the same time it manages to remain serious enough for those looking for a hidden message.