Panorama // Unrated // June 9, 2006 // Region 3
List Price: $16.95 [Buy now and save at Hkflix]
Review by Stuart Galbraith IV | posted January 25, 2007 | E-mail the Author
Though its screenplay is lightweight compared to the best films in its series, Tora-san's Song of Love (Otoko wa tsuraiyo - Tabi to onna to Torajiro or "It's Tough to Be a Man - Traveling, a Woman, and Torajiro," 1983) is an enjoyable, breezy entry in the long-running series, this being the 31st of 48 films produced between 1969 and 1995. It's also a clever variation of one of the most popular foreign films ever exhibited in Japan, William Wyler's Roman Holiday (1953). 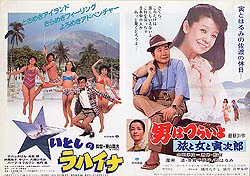 Torajiro "Tora-san" Kuruma (Kiyoshi Atsumi), the wandering itinerant peddler, returns home to his family's traditional sweets shop in the old-fashioned Shibamata neighborhood of Tokyo just as brother-in-law Hiroshi (Gin Maeda) learns that he won't be able to attend his son's school's athletic meet. (These events are Big Deals in Japan, as depicted in films like Keiksuke Kinoshita's Carmen Comes Home.) Tora-san cheerfully offers to take Mitsuo (Hidetaka Yoshioka) and cheer him on in Hiroshi's place, but the sixth grader blanches at the prospect of his uncle making a prize fool of himself in front of his classmates and teachers. Tora-san's devoted sister, Sakura (Chieko Baisho), and his Aunt and Uncle (Chieko Misaki and Masami Shimojo) delicately try to dissuade him, but Hiroshi's boss, the tactless "Octopus" (Hisao Dazai) gets into the expected fisticuffs with Tora-san and soon he's back on the road.

In Niigata, Tora-san meets a young woman amused by his gentle gregariousness and playful sense of humor, and together they hitch a ride to Sado Island, a sparsely populated vacation getaway. The woman, it turns out, is a hugely popular enka singer, a superstar named Harumi Kyo (played by Harumi Miyako, herself a famous enka star), who abruptly slipped away from her quartet of busy handlers just hours before a big concert, leaving only a note in her hotel suite asking them not to go looking for her. Over drinks, Tora-san begins to recognize Harumi but can't quite place her. He vaguely recalls seeing her "at a theater in Gifu....Weren't you selling popcorn?" However, the ancient owner of inn where they're staying (Tanie Kitabayashi) identifies her to Tora-san, though he never lets on that he knows who she is.

The picture subsequently follows the basic structure of Roman Holiday, including that film's bittersweet ending, or at least a variation of it. Though Miyako was quite popular at the time, this reviewer wonders if the picture wasn't perhaps originally conceived with another, even bigger enka performer, Hibari Misora, in mind. Misora was the undisputed "Queen of Enka" and a huge film star of the 1950s and early-1960s. She has remained a big cult item in the 17 years since her untimely death, a cult and career one might liken to that of Judy Garland. In 1983 Misora was as popular as ever though she hadn't starred in any films for some time. That Tora-san's Song of Love did only adequately at the box office further suggests Miyako's name didn't have the draw Misora's surely would have. (Director and co-writer Yoji Yamada reportedly is a big fan of Miyako, however, so perhaps he wrote his scenario intending to cast her.)

Yamada has a great talent for getting honest performances out of the pop stars and other celebrities he frequently casts, people not especially known for their acting ability (Kenji Sawada, Takuya Kimura, etc.), and Miyako is no exception. For western audiences not familiar with Miyako's albums, one might easily assume she was an actress who could sing, rather than the other way around.

Tora-san's Song of Love is best when Tora-san's family tries to decline his offer to accompany Mitsuo to the athletic meet, and the chaos that erupts when Harumi shows up in Shibamata looking for Tora-san. The former is both awkward and funny, with Tora-san trying to impress his nephew with extravagantly overdone cheers, and the family's appalled reactions and inarticulateness in trying to squelch Tora-san's enthusiasm. Also good is Mitsuo's regret later on when he realizes how much he's hurt his uncle's feelings. Everyone's fawning over Harumi - especially Octopus's starry-eyed reactions, he exemplifying the enka genre's core audience - is quite hilarious.

Takuya Fujioka and Senri Sakurai are amusing as two of Harumi's frantic handlers, Akira Hitomi has a nice bit as a cook Tora-san shortchanges, and Kitabayashi is a delight as the obaasan who first recognizes Harumi on the island. Chieko Nakakita (One Wonderful Sunday) also puts in an appearance.

Although the previous entry on the Tora-san series, Tora-san the Expert (1982), was released with a 16:9 transfer, it was released to DVD after this. And so instead, Tora-san's Song of Love gets the usual blah 4:3 letterboxed transfer that's watchable but unimpressive. (Those with widescreen TVs can zoom in without losing the English subtitles in the process, fortunately.) The mono sound is okay, as are the English subtitles. Optional Chinese subtitles are also available.

Though a minor entry, Tora-san's Song of Love is still frequently charming, and fans of the series won't want to miss this it.