Curse of the Mummy's Tomb, The

Sony Pictures // Unrated // October 23, 2006 // Region 2 // PAL
List Price: $25.50 [Buy now and save at Sendit]
Review by Stuart Galbraith IV | posted February 3, 2007 | E-mail the Author
From the late-1950s though the mid-'60s, the majority of films produced by Britain's Hammer Films were released through Columbia Pictures. Unfortunately, very few of these titles have so far made it to DVD, including such cult favorites as Yesterday's Enemy (1959), The Stranglers of Bombay, Never Take Sweets from a Stranger (both 1960), The Terror of the Tongs, Cash on Demand (both 1961), The Damned (1963), and The Gorgon (1964). However, The Curse of the Mummy's Tomb (1964), originally a co-feature with The Gorgon, was quietly released in PAL format in the U.K. last fall, and genre fans with region-free players will want to snap it up. The first and best of the three follow-ups to Hammer's 1959 film of The Mummy, The Curse of the Mummy's Tomb is quite entertaining, both funny and for its time fairly suspenseful with good shock scenes, and the 16:9 transfer does justice to Otto Heller's (Peeping Tom, The Ipcress File) Techniscope lensing. 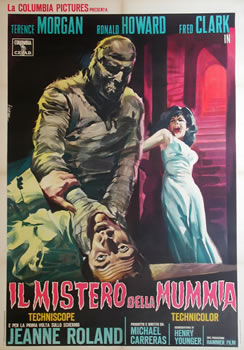 In Egypt in the year 1900, a prominent archeologist is murdered soon after locating the tomb of Pharaoh Ra-Antef. Under threat of an ancient curse and horrible death to whoever opens the mummy's tomb, American showman Alexander King (Fred Clark) forges ahead with plans to take both the mummy and its treasures on tour. King's tacky exhibition plans so upset expedition leader Sir Giles (Jack Gwillim) that he refuses to participate, though he encourages colleagues Annette (Jeanne Roland, dubbed), the murdered man's daughter, and scientist lover John (Ronald Howard) to watch over King's William Castle-like exploitation of the priceless treasures. A mysterious man, Adam Beauchamp (Terence Morgan), muscles his way into the festivities, threatening to woo Annette away from John in the process.

Soon enough, members of the party are attacked for reasons unclear, and later the mummy itself (Dickie Owen), now revived, begins wreaking its vengeance.

Though produced on a budget of just 103,000 British pounds (about $286,000 in 1964 U.S. dollars), The Curse of the Mummy's Tomb looks more expensive than it was. The film was produced, directed, and written by Michael Carreras - he wrote the script under his non de plume, Henry Younger** - and he seems to have deliberately cut corners here and there to permit more time on the shooting floor (the film was in production for about 10 weeks, a long time by Hammer standards). The reuse of Franz Reizenstein's score for the 1959 Mummy doesn't hurt the film, and though Terence Morgan and Ronald Howard lack the star presence of Peter Cushing and Christopher Lee, they're perfectly adequate.

If Cushing and Lee are missed, the support of American character actor Fred Clark in a surprising casting choice lends the film an unexpected boost. Best remembered today as Burns & Allen's neighbor on The George Burns and Gracie Allen Show (which reportedly was the second American sitcom shown on British television after Amos & Andy) and for guest appearances on countless other sitcoms, Clark's gleefully greedy showman may use anachronistically contemporary slang but ultimately comes off as likeable and sympathetic. Hammer veteran Michael Ripper has a small but enjoyable role as an Arab (the film's racial stereotypes may partly be to blame for the lack of a Region 1 release), and prolific character actress Marianne Stone turns up in a choice bit as Egyptian Hashmi Bey's (George Pastell, another Hammer regular) landlady.

The real star, however, is Carreras's subtle (by today's standards) handling of the film's horror sequences, which accentuate the menace - and height - of Dickie Owen's nearly faceless mummy, a creature closer in spirit to Lon Chaney Jr.'s Kharis in Universal's Mummy movies from the 1940s than either Boris Karloff's original or Lee's reinterpretation. That the mummy here comes off as something more than a walking prop is to be commended; it doesn't quite engender the sympathy's of Lee's extraordinary pantomime, but it does come off as much more ominous, threatening, and unstoppable. Its violent murders of various expedition members, especially one unfortunate soul whose skull is crushed under the weight of the mummy's foot, is notably gruesome if graphically tame.

Although most of Hammer's output was shot for 1.66:1 framing, Michael Carreras had a fondness for wider aspect ratios, and the 2.35:1 Techniscope format he employed on The Curse of the Mummy's Tomb looks terrific in this 16:9 enhanced presentation. The image is a tad softer than the best-looking Techniscope transfers, but Carreras and Heller's compositions look great in their proper aspect ratio. (Though originally released in the U.K. by British Lion, this print bears Columbia's logo.) There are no Extra Features, but the disc is accompanied by myriad alternate audio and subtitle options. In addition to the unusually clean English Dolby Digital mono audio, there are tracks in French, German, Spanish, and Italian, along with subtitles in English, Arabic, Bulgarian, Danish, Finnish, French, German, Greek, Hindi, Italian, Norwegian, Portuguese, Romanian, Spanish, Swedish, and Turkish. Wow!