First time writer-director Marina Razbezhkina is behind the camera of Vremya Zhatvy a.k.a Harvest Time (2004) - a breathtakingly beautiful film about a small farming community from the last days of Stalinist USSR.

The story of Harvest Time evolves around Antonina (Ludmila Motornya) and her husband Gennadiy (Vyacheslav Batrakov) who has lost both of his legs in WW2. Each day Antonina must operate an enormously large combine to assist the local kolkhoz. As Gennadiy can do only a limited amount of work (his body is tied to a hand-made wooden cart) Antonina must always manage her time well – the family needs her just as much as the local apparatchiks do. 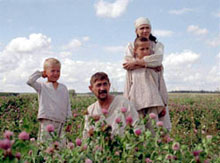 To recognize her hard work the Soviet leaders award Antonina with a large red flag, a rare token of appreciation, which she brings back home. Excited at first Antonina quickly becomes obsessed with the velvet piece as she is unable to keep hordes of hungry rats away from it. The once confident Russian combiner is devastated.

A beautifully photographed film reminiscent of Aleksandr Sokurov's The Second Circle (1990) Marina Razbezhkina's Harvest Time is a film full of bitter irony. Recreating a time from Soviet history when empty slogans and dubious ideals were driving the country on the verge of economic collapse Razbezhkina's film tells an intimate story with a universal message.

The strength of this film indeed lies in its astonishing cinematography, not its storyline. The premise is simple and in fact very predictable. Yet the daily struggles, the gut-wrenching poverty, and the destructive sense of duty that collide in Antonina's character transform Harvest Time into an exceptional piece of cinema. The tiny details Razbezhkina's camera is able to capture, from Gennadiy's face overflowing with agony to the afternoon haze over the wheat fields where the wind is roaming freely, provide the story with a special charm. A desired sense of authenticity is enhanced by the use of non-professional actors who seem unaware of the camera's presence.

Clocking in at approximately 68 minutes Harvest Time is also an incredibly nostalgic film. Not so much because of the time Antonina and Gennadiy share, Razbezhkina does not glorify or condemn the Stalinist regime, but rather because of the rare sense of belonging the two characters reveal, their passion for each other.

Finally the tragic epilogue of Harvest Time is just as evocative as the inclusion of Peer Gynt's (Edvard Grieg) reoccurring leitmotif. Past, present, and future are bundled in a collage of images where an almighty Russian sense of doom provides a spectacular closure.

Presented in its original aspect ratio of 1.33:1 Harvest Time looks solid -- the print provided by KINO is indeed of high quality. Contrast is handled quite well and so is the color-scheme (a vital component of the film's composition). Unfortunately once again what could have been a spectacular presentation is partially marred by the fact that this does appear to be a PAL-port. This being said, I am not so concerned with the typical for KINO imporper conversion as Harvest Time looks very well -- many of the disturbing issues associated with these types of transfers are actually hardly noticeable here (ghosting, combing, etc). Finally, the print does not reveal any damage either and as far as I can tell the PAL-master must have been in perfect condition.

Presented with a Russian DD track and optional English subtitles the audio is very well handled. There were no pop-ups or disturbing hissing that I need to report and the dialog was very easy to follow. My only concern here is the use of yellow English subtitles which I still find a bit distracting (certainly given the dominant presence of yellow in the main feature).

Sadly, there isn't a single piece of supplemental material on this disc.

A very impressive film from first time writer-director Marina Razbezhkina! Gentle, poetic, and reminiscent of the works of Tarkovsky and Sokurov Harvest Time is indeed one of the best films to come out of Russia in a very long time. If interested in post-Soviet contemporary cinema I strongly recommend that you take a look at it.