International - HKFlix.com // Unrated // January 4, 2007 // Region 3
List Price: $14.95 [Buy now and save at Hkflix]
Review by Stuart Galbraith IV | posted February 8, 2007 | E-mail the Author
Though among the 48 "Tora-san" movies produced between 1969 and 1995 Tora-san's Forbidden Love (1984) rates only about average, this 34th entry will likely appeal to viewers for reasons other than the film itself. It's among the first Tora-san movies available with both English subtitles and a 16:9 enhanced transfer -- Panorama's earlier DVDs were 4:3 letterboxed, using older transfers. Also, Tora-san's Forbidden Love was a New Year's holiday release, and in theaters just 13 days after the premiere of Toho's much-publicized return to the kaiju eiga genre, the comparatively big budget Gojira (a.k.a. Godzilla: 1985), which director and co-writer Yoji Yamada (The Hidden Blade) gently lampoons in the film's pre-credits sequence, which also makes extensive and amusing use of footage from The X from Outer Space (Uchu daikaiju Girara, 1967), an earlier Shochiku Studios production. More about this later. 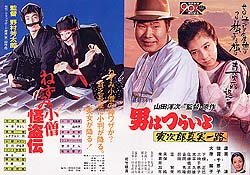 The movie is fairly straightforward and uncluttered, with itinerant peddler Tora-san (Kiyoshi Atsumi) drinking away the evening at a yakitori shop after the usual fight with his family, soon after returning home to Tokyo. Fully expecting his saintly sister Sakura (Chieko Baisho) to bail him out, Tora-san lavishly orders the best food and sake despite having no money. Tominaga (Masakane Yonekura), sitting nearby, is equally amused and impressed by Tora-san's chutzpah; he's a section chief at a high-profile securities company and would never dream of doing such an irresponsible thing.

Tominaga pays Tora-san's bill and the following day Tora-san shows up at that man's bustling office, woefully out-of-place among the Bubble Economy's wheelers and dealers. Tominaga works late into the evening but afterwards the two get drunk and end up at Tominaga's home, far from central Tokyo in Ibaraki Prefecture, a good hour's commute by train. Too drunk to remember the night before, Tora-san wakes up in the man's suburban home, Tominaga already having left for work and leaving Tora-san alone with the man's beautiful wife, Fujiko (Reiko Ohara). Far from the city and with her husband at work from early morning until night six days a week, she's desperately lonely but Tora-san declines her invitation to stay and talk, worried what the Tominaga's neighbors will think.

Later, the pressures of Tominaga's job finally get the better of him. He short-circuits and without warning disappears to his rural hometown near Kagoshima, in southwestern Japan. Desperate to find her missing husband, Fujiko enlists Tora-san's aide, but he's torn between a wanting to help her and secretly hoping that he's never found, because by this time he, of course, has fallen in love with her.

Basically a sad commentary on the grueling price Japan's workforce paid for its unprecedented rise in the world economy, Tominaga is burdened with a routine all too common in Japan, where office life is all-consuming and time at home is limited to a quick bath and a couple hours of sleep between long commutes. Tominaga seems to have it all: a high-paying job, a home of his home, and a family that loves him, but no time at all to enjoy its benefits. The film's final scene offers another funny, sad acknowledgement of a changing Japan, with Tora-san and a fellow peddler waiting for a train at a station they don't realize has shut down -- until they notice that the rails just off the platform have been taken away. At the time the Japanese government was privatizing the country's railways, resulting in the closure of many local lines.

In Tora-san's Forbidden Love (Otoko wa tsuraiyo -- Torajiro shinjitsu ichiro or, "It's Tough to Be a Man -- Torajiro's Truthful Path") Yoji Yamada tries to show a darker, almost distasteful side to Tora-san, that he secretly hopes Tominaga never comes back so that he can have Fujiko for himself, but the film's screenplay generally dances around the issue rather than dealing with it head-on, though the film, typical of the series, is quite entertaining and occasionally very funny.

For those unfamiliar with the series, most entries open with a dream sequence, in which regular characters from the series appear in often elaborate spoofs of jidai-geki, chanbara, and other Japanese film genres, as well as American musicals, gangster, pirate movies, etc. Tora-san's Forbidden Love opens with the sudden appearance of a giant monster, played via stock footage by Girara from The X from Outer Space, Shochiku's only Godzilla-style monster movie.

"It's Godzilla!" cries the Japanese Prime Minster (also Dazai), but scientist Hiroshi (Gin Maeda) corrects him: "No, it's more like a pointy-headed lizard." The prime minister calls on eminent scientist and philosopher Tora-san to end the monster's rampage, but he mourns the "cute" monster's fate. The funny scene ends when, the dream over, Tora-san is jolted awake, frightened by a little boy wearing a Godzilla mask.

Tora-san's Forbidden Love, a Shochiku 90th Anniversary release, is given a handsome 16:9 enhanced transfer that does justice to Tetsuo Takaba's Panavision lensing. The mono sound is adequate, as are the imperfect but acceptable English subtitles. Optional Chinese subtitles are also available.

Tora-san's Forbidden Love is unexceptional by the high standards of this great series, but still a lot of fun and a window into Japanese life during the mid-1980s. Highly Recommended.

Note: This film follows Marriage Counselor Tora-san (1984), and is followed by Tora-san the Go-Between (1985).