Panorama // Unrated // July 6, 2006 // Region 3
List Price: $17.95 [Buy now and save at Hkflix]
Review by Stuart Galbraith IV | posted March 6, 2007 | E-mail the Author
An excellent entry in the long running Tora-san film series, Tora-san Goes Religious (Otoko wa tsuraiyo - Kuchibue wo fuku Torajiro, or "It's Tough to Be a Man - Torajiro Blows the Whistle," 1983) delicately juggles several compelling storylines at once and star Kiyoshi Atsumi gives one of his very best performances in the title role. The film, a New Year's release, was a big hit, placing fifth on the list of top domestic films of 1984 though curiously it won no awards. 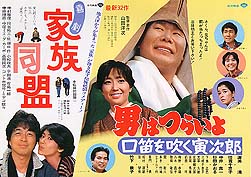 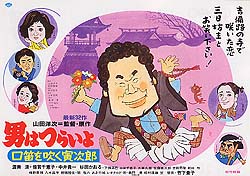 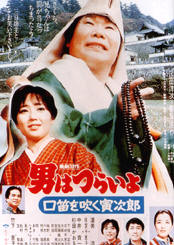 Itinerant peddler Tora-san (Atsumi) is in western Japan, in Okayama, and while there decides to pay his respects to his brother-in-law's father, the late scholar Hyoichiro Suwa (played by Takashi Shimura in three previous entries). At the temple where Suwa's bones are buried, Tora-san meets the temple's priest (Tatsuo Matsumura), his beautiful divorced daughter, Tomoko (Keiko Takeshita), and rebellious son Kazumichi (Kiichi Nakai). Breaking from tradition, Kazumichi is determined to pursue a career in photography rather than follow in his father's footsteps, become a priest, and take over the temple.

Tora-san and the priest drink late into the night and, of course, Tora-san falls in love with Tomoko. The next morning the family is surprised to learn that the priest is expected to deliver a memorial speech for a recently-deceased grandmother. But he's too hung-over, and so Tora-san, wearing the priest's robes, goes in his place. To everyone's surprise, Tora-san's impromptu service proves immensely popular with the mourners.

Meanwhile, brother-in-law Hiroshi (Gin Maeda) and wife Sakura (Chieko Baisho), Tora-san's sister, arrive in Okayama to attend memorial services marking the second anniversary of his father's death. Not only are they shocked to find Tora-san in priest's robes assisting the priest in the ceremony, but they become embroiled in a bitter dispute among Hiroshi's siblings over their father's substantial estate.

Tora-san Goes Religious (also known as Tora-san Goes Religious?) rates high among the 48 films produced between 1969 and 1995. Possibly inspired in part by the death of the great film actor Takashi Shimura (Ikiru, Seven Samurai) shortly before it was written, the picture acknowledges its own history throughout in poignant little ways, from Tora-san's confessional-like prayer before Hyoichiro's grave - beautifully acted by Atsumi - to the casting of Tatsuo Matsumura, who had previously played Tora-san's Uncle Tatsuzo in several entries, as the priest.

The script by Yoshitaka Asama and director Yoji Yamada (The Yellow Handkerchief, Twilight Samurai) expertly dramatizes two multigenerational problems common in Japan, one much less so in the western world: bitter squabbling among siblings over the disbursement of a deceased parent's estate, and the palpable tension that arises when the eldest son refuses to take over the family trade. Hiroshi, as the youngest brother can do little but watch helplessly as his older brothers and sister fight, but obviously sympathizes with his oldest brother's desire to keep his father's home intact to preserve his memory, while the middle siblings want only to sell the property off and reap the financial rewards.

Tora-san, meanwhile, becomes embroiled in the latter problem, in one sense becoming something of a surrogate son for the old, unhappy priest. Tora-san, mischievously amused by his own "performances," conducting services, chanting sutras and the like, combined with his highly unusual manner is quite hilarious, as is watching his family's shocked reaction at finding him working as the priest's new disciple.

Added to this is the generally sweet tale of Kazumichi's efforts to make a go of it as a photographer in Tokyo, and his hometown girlfriend's (the recently scandalous Kaoru Sugita) efforts to join him there. (At one point Kazu's seen with a model billed in the credits as "Rachel." This turns out to be none other than Rachel Huggett, one of the Caucasian stars of Sayonara Jupiter.)

The performances are excellent all-around, particularly Atsumi, Takeshita (TV's "From the Northern Country," A Class to Remember), and Nakai (The Burmese Harp remake, Owl's Castle), the latter just 22 and at the beginning of his long career.

Tora-san Goes Religious is presented in another 4:3 letterboxed transfer that's serviceable but no more than that, as are the English subtitles. The mono sound is adequate. Optional Chinese subtitles are also available.

As usual, supplements are limited to the booklet and onscreen director's biography and filmography (in both Chinese and English).

With its excellent regular and guest actors, the fine script, and sensitive direction of Yoji Yamada, Tora-san Goes Religious is one of the series' best. Highly Recommended.