Panorama // Unrated // November 16, 2006 // Region 3
List Price: $17.99 [Buy now and save at Hkflix]
Review by Stuart Galbraith IV | posted March 9, 2007 | E-mail the Author
An excellent drama about the plight of everyday workers in a Japan hard-hit by the recession, The New Voyage (Gakko III, 1998) is the third of director Yoji Yamada's four "Gakko" ("School") films to date. Each movie honestly but optimistically dramatizes the struggles of students and teachers trying to better themselves in unconventional educational programs. In A Class to Remember (Gakko, 1993) semi-literate, working-class adults, troubled youths, and discriminated foreigners worked with devoted teacher Toshiyuki Nishida to earn their junior high school diploma, while The Learning Circle (Gakko II, 1996) was set in a school for mentally-retarded teenagers. The New Voyage focuses in on two displaced workers studying at a free-of-charge vocational school. Unlike most of Panorama's Japanese movies licensed from original distributor Shochiku, this DVD offers a strong 16:9 enhanced presentation with excellent audio to boot. 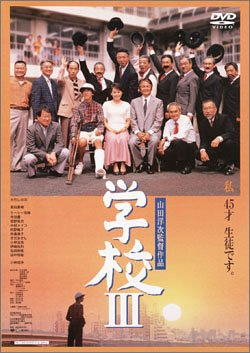 Sawako Kojima (Shinobu Otaki) unceremoniously loses her job when her entire accounting department is shut down and its work outsourced. Meanwhile, Shukichi Takano's (Nenji Kobayashi) securities company president announces that in a recession spurred restructuring, all workers over the age of 50 are expected to "voluntarily" (read: be forced to) step down.

Six months later, both have entered a free vocational program training its students, rather like the workers in Fritz Lang's Metropolis, to man the megalopolis's myriad boilers and transformers beneath Tokyo's skyscrapers. Joining a class of varied if similarly displaced older men, Sawako is anxious about her future but eager to learn, while Shukichi is anti-social and combative. He's not ready to swallow the bitter pill of his firing just yet.

Sawako is burdened by more hardships: widowed ten years earlier - her husband apparently died from overwork - she alone cares for their 16-year-old son, "Tommy" (Yuki Kuroda), who is autistic. Though he's found work delivering newspapers on his bicycle, he consumes what's left of Sawako's free-time. In an early scene, Tommy becomes distressed when his newspapers get wet, and in a panic substitutes dry but outdated papers in their place. Already exhausted, Sawako goes door-to-door to apologize, and encounters cruelly unsympathetic customers, including one who complains that Tommy frightens her children and suggests the boy be institutionalized. (Hidetaka Yoshioka makes a cameo here as Tommy's Yomiuri News distressed co-worker.)

Shukichi, meanwhile, is recently separated from his businesswoman wife, drinks too much, has an unhappy relationship with his own teenaged son, and has been reduced to living in a cramped apartment. No wonder he's so surly in the classroom.

Largely out of desperation and loneliness rather than actual love the two adults are eventually drawn to one another, though the story and script by Yamada (Twilight Samurai, the "Tora-san" film series), Yoshitaka Asama, and Hisako Tsurushima is honest and largely unsentimental. The first three Gakko films all deal with characters trying to cope with an overwhelming sense of shame and humiliation, in this case people reduced to becoming high-tech janitors. Near the end of the film, Sawako, in her coveralls uniform, is seen weaving through a typically bustling white-collar office to change a lightbulb. The office workers in their suits and ties subtly look down on her and her position, but those watching the movie have an entirely different view. We almost profoundly respect her Herculean efforts to support herself and her son, her sacrifices to ensure semi-secure employment.

For western audiences, the film also offers viewers the chance to vicariously experience many of Japan's singular social, work, and educational customs, from morning exercises in the school's courtyard and Japanese-style graduation ceremonies, to the rotating responsibility of keeping the classroom clean, all of which plays an important role in Shukichi's integration into and acceptance by his classmates.

The excellent supporting cast includes the great character actor Kunie Tanaka as one of the old students; he had been quite memorable in the first Gakko film, though he plays a different character here and his role this time is small. Folk singer/composer Masashi Sada turns up briefly for an amusing turn as a substitute teacher, while Kimiko Yo earned several nominations and awards as Sawako's good-natured friend and neighbor.

The New Voyage is presented in a 16:9 enhanced transfer at 1.77:1, approximating its original 1.85:1 release (called "VistaVision size" or "Vista size" in Japan). The image is strong though one senses the image could be pushed a little further in terms of clarity and contrast. Still, it's great to see at least some of the recent Panorama titles get "anamorphic" enhancement. The audio is also very good, a strong 2.0 Dolby Digital Stereo mix with a lot of directional dialogue and sound effects, and which also does well by Isao Tomita score (and Miyuki Nakajima's end title song, quite lovely). The English subtitles aren't perfect but generally okay. There are a few typos, the timing is sometimes a little bit off, and things like text go unsubtitled. Optional Chinese subtitles are also available.

At a time when far too many recent Japanese films, adopting the Hollywood model, avoid real human issues in favor of comic book action, low-brow slapstick, and unearned sentiment, it's refreshing to see a picture with believable and compelling characters grappling with identifiable, everyday and timely problems. Highly Recommended.