Panorama // Unrated // April 27, 2006 // Region 3
List Price: $16.95 [Buy now and save at Hkflix]
Review by Stuart Galbraith IV | posted April 4, 2007 | E-mail the Author
Ranking squarely in the middle of its series high average, Tora-san's Promise (Otoko wa tsuraiyo - Torajiro kamifusen, or "It's Tough to Be a Man - Torajiro's Paper Balloon," 1981) is business as usual for the itinerant peddler Torajiro Kuruma (Kiysohi Atsumi) and his much put-upon family. Those who'd make the "see one and you've seen 'em all" argument miss the point entirely; for Japanese audiences, part of the fun of this long-running series is its comfort food-like predictability, and the subtle experimentation director and co-writer Yoji Yamada infuses every film with. 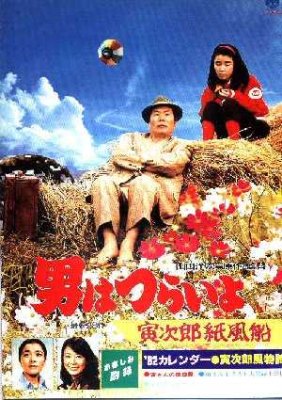 This 28th of 48 Tora-san movies opens with Tora-san returning home to his family's traditional sweets shop in Shibamata, in Tokyo. As it turns out, he's arrived the same day of his elementary school's class reunion. Tora-san's sister, Sakura (Chieko Baisho) and Aunt Tsune (Chieko Misaki) encourage Tora-san to attend, but later Uncle Tatsuzo (Masami Shimojo) suggests that maybe that wasn't such a good idea. Tora-san's classmates are probably all married with children and have decent jobs.

The class reunion (or "alumni meeting" as these more formal events are called in Japan) proves a disaster. Everyone remembers the troubled Torajiro as something of an obnoxious bully, and at the reunion he gets falling down drunk after insulting everyone around him. After making a scene Tora-san returns to his wandering, and later his family realizes how painful the experience must have been for him.

In Kyushu Tora-san reluctantly shares his room at an inn that's become overbooked. His roommate turns out to be Aiko (Kayoko Kishimoto), a flighty, chatty, and combative 18-year-old who suddenly left home once her widowed mother found a new boyfriend. She quickly becomes attracted to his freestyle way of living, helping him peddle his wares at a nearby shrine's festival. Unusual for Tora-san, he finds her pretty annoying and can't wait to get rid of her.

Also at the festival Tora-san meets Mitsue (Mikiko Otonashi), who's running her husband's takoyaki (deep fried octopus shaped like golf balls) stand. She explains that her much older husband, Tsuneyoshi (Shoichi Ozawa) is seriously ill so she's had to help out. Tora-san decides to visit his old friend, who by this time is terminally ill. Indeed, Tora-san turns out to be his last visitor, and before leaving "Tsune" makes Tora-san promise to marry his wife when he dies. As Mitsue is both kind and beautiful, Tora-san quietly embraces the idea.

Both funny and sad Tora-san's Promise once again hammers home the series' basic conceit, that Tora-san can at best exist only on the fringes of "normal" society, that he can never be in a committed romantic relationship, that he can't hold a regular job, etc. After Sakura's son, Mitsuo (Hidetaka Yoshioka) is given the latest computer game by his father's employer (Hisao Dazai), Tora-san shows up and with much grandiosity presents Mitsuo with a toy he's brought him: an old-fashioned paper balloon. Mitsuo doesn't even know what to do with it until his great-uncle explains that you just kind of bounce it around with your hand. But this simple pleasure is lost on Mitsuo; he remains unimpressed.

Another good scene has Aiko's fisherman brother (Takeo Chii) storming into Shibamata like an angry gangster, armed with a colossal frozen tuna (an omiyage, or souvenir/gift for the Kurumas) and demanding that Aiko return home. His extreme reaction initially frightens everyone in Shibatama - he looks ready to kill her - but later Sakura tells Hiroshi how impressed she was by the way he has taken care of her. How nice it must be to have a brother, she says, forgetting momentarily, of course, that she does have a brother.

Tora-san's Promise gets a bland 4:3 letterboxed job that's not enhanced, and slightly crops the original 2.35:1 Panavision OAR to about 1.85:1. That said, the image is fairly sharp all things considered, and crops well on widescreen TVs. The mono sound is adequate, as are the English subtitles. Optional Chinese subtitles are also included.

Supplements, as usual, are limited to the booklet and onscreen director's biography and filmography (in both Chinese and English).

Tora-san's Promise is a good if not great entry in the popular series, one that fans will enjoy.

Note: This film follows Tora-san's Many Splintered Love (1981) and is followed by Hearts and Flowers for Tora-san (1982).


Film historian Stuart Galbraith IV's most recent essays appear in Criterion's new three-disc Seven Samurai DVD and BCI Eclipse's The Quiet Duel. His audio commentary for Invasion of Astro Monster is due out in June.