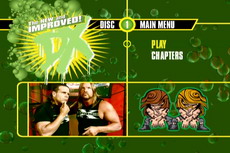 The New And Improved! DX is the latest DVD from the WWE highlighting all of DX's escapades from last year. This three DVD set contains nine hours of content, from their appearances on Raw to various PPV matches, it's all here.

Now, I wasn't around for the first incarnation of DX. Heck, I missed the entire "Attitude" era. So when HBK and HHH reformed DX, I had a slight advantage - I had no basis for comparison. Therefore, I wasn't biased one way or another - except on HBK and HHH's characters in a solo capacity (well, not counting Evolution). However, I have to admit I marked out like a little schoolgirl when Shawn made the save as HHH was taking on the Spirit Squad. And, unlike DX's first go 'round, I saw each and every appearance when originally broadcast - yay me!

DX's appearances on these discs are in chronological order and, as far as I can tell, complete and unedited. Additionally, in between some appearances and/or skits, there are comments from various WWE superstars. Disc one is 3 hours and 13 minutes long and features the following chapters:

Disc three wraps up DX's 2006 appearances with the remaining two and a half hour of matches and skits:

In addition to all of the previous material, we're also treated to the following "extras" on disc three. Most of these chapters are basically recaps of the various DX "storylines":

Video: the New And Improved! DX's picture was colorful and vibrant. However, upon closer inspection (read: standing close to my 36" screen) I noticed some wicked compression artifacts whenever the duo hit the ring. From a distance, it wasn't nearly as bad, but I honestly didn't feel this was a deal-breaker and only pointed it out to be thorough. It's presented in the WWE's standard full frame 1.33:1 ratio.

Conclusion: the New And Improved! DX will definitely satisfy fans of the current incarnation of DX. Though they quickly gloss over the long road it took for Shawn and HHH to reunite, you'll find every single WWE appearance in this set. Watching it made me wish that Vince released the weekly eps of Raw and SmackDown! (for its fans) on DVD. Sure, you might be looking at two double disc sets a month, but would that really be so bad? Besides, not every WWE superstar/super team would get this sort of treatment. Anyways, back to DX. Originally, slightly disappointing picture quality aside, I was going to give this highly comprehensive set a "highly recommended" rating. However, the more I thought about it, the more I couldn't deny that the completeness of this set, coupled with the presentation and packaging, is something that deserves DVD Talk's highest rating - DVD Talk Collector Series.

"And if you didn't like this review, i've got two words for you..."