A Japanese man (J.M. Rikiya Kurokawa) obsessed with Jean-Pierre Melville's classic picture Le Samourai travels to Australia where an unknown vendor has offered to sell him the "Déesse" (French for Goddess), the beautiful Citroën DS driven by Alain Delon. Upon arrival however J.M. discovers that the seller has passed away. Fortunately, a blind girl (B.G. Rose Byrne) offers to guide him to the place where the Goddess resides. 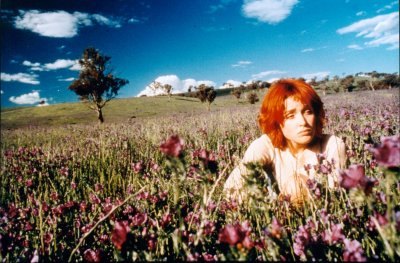 Despite of the fact that the Goddess of 1967 (2000), Australian director Clara Law's latest film, manages to integrate a number of interesting themes together – alienation, incest, murder, romance – the sum of its parts is anything but intriguing. Shot as a metaphor to modern life where human beings exist in a perpetual state of confusion this critically-acclaimed film (Rose Byrne won the prestigious Best Actress Award at the Venice International Film Festival) delves deep into human nature seeking answers to some difficult questions. What makes us feel, how we connect with each other, what is the origin of violence, are all but a few of the dilemmas Law is concerned with.

The structure of the film however affects negatively the desired by the director philosophical approach to storytelling as neither action nor narrative appear properly gelled for such direction. As a result, a meaningless journey through the Outback, the focus of attention in this picture, quickly becomes difficult to watch, at times even impossible to endure.

What the Goddess of 1967 lacks in substance though it certainly makes up in style! Cinematographer Dion Beebe demands recognition as practically every single shot from the Australian Outback is a little masterpiece. The unusual use of color further enhances the picture's sophisticated look surely guaranteeing success amongst those interested in abstract cinema (adding animation shots works surprisingly well).

Still, Law's inability to link the missing pieces in this curious emotional-jigsaw more often frustrate than fascinate. During the second half of the Goddess of 1967 it also becomes painfully obvious that the director does not strive for answers to the important questions asked earlier, rather she becomes content with the picture's impressive style! As a result the viewer is left with a heavy feeling of emptiness wondering if all the glitter and beauty were worth tolerating!

Presented in an aspect ratio of 1.85:1 and enhanced for widescreen TVs this DVD reveals a treatment rather typical Image Entertainment after their acquisition of HVE. Even though a partial attempt to convert this properly from a PAL-master has been made I was able to see a few mild examples of combing (the most obvious and easily recognizable one is when the camera zooms and follows the train from leaving the station in Japan – this occurs very early in the film). Furthermore, the print also reveals minor compression artifacts which mixed with more than a usual dose of contrast boosting provide the film with a rough and at times very edgy look. On large TV sets it becomes painfully obvious that the picture has indeed been manipulated. This being said the color scheme is very well sustained and there is great balance between the "normal" scenes from the opening (Japan) and the more abstract-looking segments from the film (the Australian Outback). The image also remains rather solid throughout and substantial damage marks were not present. Overall, this is an average presentation and as mentioned earlier surely one of those Image-efforts that will likely disappoint those remembering the solid sproduct once provided by HVE.

The audio treatment is also a bit of a disappointment. I understand that the R4 release of this film boasts a nice 5.1 track yet all we have here is a modest English DD mix which seems to get job done but in no way compliments the powerful soundtrack available. I did not detect any serious issues worthy of reporting: dialog is easy to follow. Unfortunately English subtitles have not been provided for the main feature.

The best extra here is actually not on the DVD. It is a wonderful essay by associate Professor Dian Li (from the Department of East Asian Studies at the University of Arizona, Tucson) found on a an insert provided with the film. Professor Li carefully explains some of themes found in the Goddess of 1967 as well as their significance for the director of the film. Aside from that there is trailer, stills gallery, and a standard featurette titled "A Story of...a Goddess" which addresses both fragments from the story as well specific aspects from the technical execution of this film.

I quite enjoyed this film, despite of its numerous flaws, and likely will one day seek the Australian release. This being said however the presentation provided by Image is far from convincing. The DVD clearly reveals signs of improper conversion (the side effects, ghosting and combing, are all here) and it is a shame that no one cared to take care of it.