To Paint or Make Love

For William (Daniel Auteuil) and Madeleine (Sabine Azema) life has been an exciting, full of success journey. They have pursued the careers of their dreams, created a family, and raised a beautiful child.

Looking to escape the havoc of city life Madeleine often embarks on short trips through the French countryside where she likes to paint alone. During one of those trips Madeleine encounters Adam (Sergi Lopez) a blind man with an unusual sense of humor. He offers to show her a gorgeous house which the owners are now selling.

Madeleine quickly falls in love with the house. A day later she asks William if he would ever consider moving away from the city. The answer is positive.

Madeleine and William invite Adam and his girlfriend for dinner at their newly restored home. In a matter of days the two couples become inseparable friends. 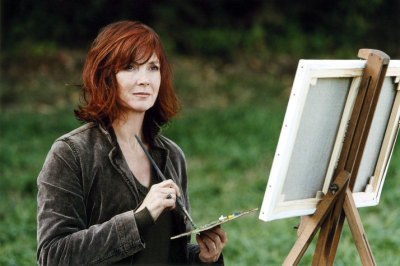 For many of us life equates a tedious routine of acts devoid of pleasure - driving, working, eating by the clock, even making love by the clock! We strive to program our lives, become modern, until one day we realize that we've grown too tired, become too busy to enjoy each other.

In Peindre Ou Faire L'Amour a.k.a To Paint or Make Love (2005), French directors Arnaud Larrieu and Jean-Marie Larrieu's latest picture, an aging couple breaks away from the routine and finds new ways of enjoying each other. Bluntly put they rediscover the strength of their relationship by allowing a second couple to enter it.

Conventional wisdom suggests, and so do a few notable critics, that such approach to love is doomed. There is nothing beyond the point where Madeleine and William are, their upper 40s, that could sustain such reckless idea. Their life has entered a natural progression where most couples follow a journey with a predictable destination.

Yet, when Madeleine and William decide to take a risk and let another couple into their world they rediscover a sense of belonging thought to be lost. Nights around the fireplace, an engaging conversation, quiet walks after dinner, create a sense of intimacy which typically occurs between two people not two couples – logically, the physical act of love follows up quickly. 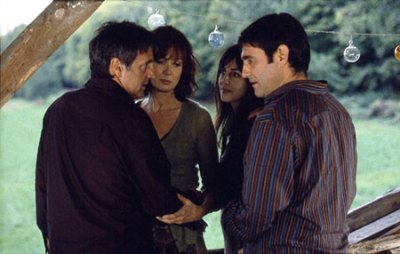 To Paint or Make Love will likely split audiences in half. Some will dismiss this dialog-driven French production as being too out of touch with reality, a project that does nothing more than put an arty spin to an all too familiar story. Its suggestive narrative, full of literary references, will likely anger those who don't appreciate films testing the boundaries of moral decency (no matter what the excuse).

Others will find the premise of this film fascinating! The idea that two people could remain in love welcoming a second couple to share their world is not unheard of but, let's admit it, often seen in a negative light. Even more so when the guilty party happens to be past their prime! In To Paint or Make Love, however, a different sort of culture is being investigated. One that allows people to freely express their emotions even if they ultimately prove too amoral in the eyes of those who dare judge them!!

In 2005 the picture was nominated for Palm d'Or at the Cannes Film Festival. 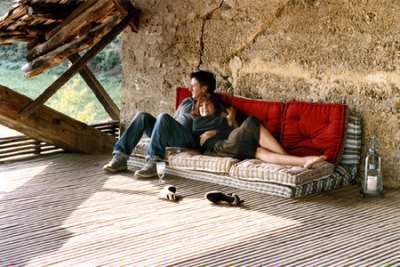 Presented in an aspect ratio of 1.78:1 (OAR 1.66:1) and enhanced for widescreen TVs this Canadian produced disc appears to have been sourced from a PAL master. Given Mongrel Media's past output this shouldn't be a surprise. In fact, the actual quality of the presentation is quite good! Yes, there is a visible amount of "ghosting" but it is not as rampant and obtrusive as the one seen on the company's disc for the German drama Summer 04.

Contrast is well-handled and for the most part the disc reveals average to good treatment of daylight versus night scenes. Digital noise is present but it isn't distracting to a point where you will not be able to enjoy the main feature. Furthermore, I did not detect any print damage (debris, scratches). Edge-enhancement on the other hand may prove difficult to tolerate especially to those with large TVs – more often than not you will notice that clarity and sharpness suffer substantially. Finally, I am convinced that had this disc been converted properly most of the issues described above would have not been as distracting as they currently are.

Presented with a French 2.0 and 5.1 tracks the DVD sounds very good! Dialog is very easy to follow and the wonderful music soundtrack comes off the speakers without any issues I need to report. The rear channels occasionally get a good dose of workout but given the films predominantly dialog-driven structure there is hardly a great deal of activity to begin with. Lastly, I did not detect any disturbing audio imperfections (pop-ups/ hissing). The disc arrives with optional, of decent size, English subtitles.

There are no extras to be found on this DVD, not even a trailer.

Intelligently-written, sensual, with enough zest to upset a legion of moralists To Paint or Make Love will entertain those who don't mind using their heads. The rest will find it pretentious! As to the DVD produced by Canadian distribs Mongrel Media let's just say that this is the only English-friendly version of this film on the market. Which I consider a good enough reason to recommend the disc!