Panorama // Unrated // August 14, 2006 // Region 3
List Price: $17.95 [Buy now and save at Hkflix]
Review by Stuart Galbraith IV | posted May 15, 2007 | E-mail the Author
An above-average entry in the long-running "Tora-san" film series, Tora-san's Marriage Counselor (Otoko wa tsuraiyo -- Yogiri ni musebu torajiro, or "It's Tough to Be a Man - Night Fog Weeping Torajiro," 1984) engagingly departs from the usual formula, and it's somewhat darker from most entries despite an unusual, almost slapstick finale that likewise deviates from most Tora-san films. 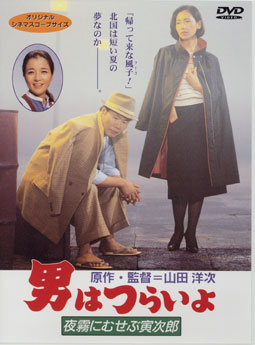 Meanwhile, Tora-san is busy in the North Country area of Iwate Prefecture, selling toy globes of the world. (He sends one to nephew Mitsuo, who is starting junior high school.) Unexpectedly, he is reunited with Noboru (Taisaku Akino), a character introduced in the very first Tora-san movie, Tora-san, Our Loveable Tramp (Otoko wa tsuraiyo, 1969). In that film, Noboru was a wayward youth attracted to Tora-san's seemingly carefree existence, but at the climax, to prevent the boy from throwing his life away, Tora-san cruelly but selflessly breaks off their close friendship.

Now, 15 years later, Noboru is settled down with a wife and a small business, yet surprisingly after all these years Tora-san resists Noboru's enthusiastic invitations to drink and reminisce: the last thing Tora-san wants to do is to fill Noboru's head with feelings of nostalgia.

Later, Tora-san becomes involved with a lady barber, Fuko (Rie Nakahara), after she unsuccessfully lobbies for a job with a local barber (series regular Akira Hitomi) then cutting Tora-san's hair. They have much in common, even a nickname, but mostly a shared unhappiness and wanderlust. They decide to travel together to Hokkaido, but are joined by a gloomy single father, Eisaku Fukuda (amusingly played by B-saku Sato) trying to reconcile with a wife who left him some time before.

Eventually, Fuko finds a job cutting hair in Hokkaido while her attraction to Tora-san and his freewheeling life increases. Like Noboru years before, Tora-san puts a stop to the latter, and in desperate loneliness she turns to another man, daredevil motorcycle rider Tony (Tsunehiko Watase, looking more like Sonny Chiba here), and the two embark on an abusive relationship that comes to a head when she gets sick while the two are in Tokyo.

Tora-san's Marriage Counselor (a vague, meaningless title) is impressive on many levels, especially in terms of how it stays focused on the downside to Tora-san's wandering lifestyle, and how in the long run no good can come from it. The life of Japan's peddlers, moving from one local festival to the next, selling their cheap goods and high-fat snacks, never looked less appealing than it does here, especially in Tony's rickety motorcycle exhibit, which looks ready to collapse (and take several spectators with it) at any moment.

All this is contrasted to life in Shibamata, where tomboy Akemi's impending marriage leads to a very, very sweet scene where, coaxed by Tora-san's sister, Sakura (Chieko Baisho), Akemi thanks her father for everything he's done for her, and the earned emotion of the moment is quite touching.

Nakahara is quite good as Fuko, but here career never seemed to take off like perhaps it should, perhaps owing to the glut of female singer-actresses in mid-1980s Japan.

As with most of Panorama's "Tora-san" DVDs, Tora-san's Marriage Counselor is presented in 4:3 letterboxed format, at about 1.85:1. (The film was shot in Panavision, so a slight amount of picture information is lost on the sides.) The transfer is otherwise okay, as is the mono audio and acceptable English subtitles. Optional Chinese subtitles are included.

None, apart from the insert booklet and onscreen director's biography and filmography (in both Chinese and English).

With its darker tone and atypical structure, Tora-san's Marriage Counselor is like a breath of fresh air following a series of recent, somewhat repetitive entries. It's a strong film, and despite a lackluster transfer comes Highly Recommended.