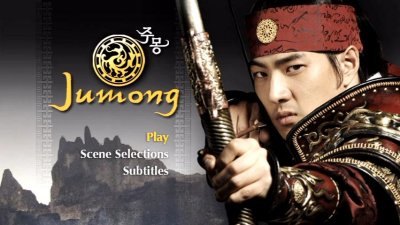 Jumong, also known as Prince of the Legend, is a South Korean television drama (K-drama) from the MBC network. The series is a historical drama based loosely on the real life accounts of Jumong. He was a king in Korea's history that helped form a massive kingdom and protect its citizens from the oppressive Han Empire. The true details about Jumong's life and the events surrounding it are not historically accurate. The story is more a myth, which can be read about in the included reference guide booklet. The K-drama Jumong portrays a loose interpretation around the myths and limited information about him. There are a total of eighty-one episodes that make up the series. They are being released on DVD by YA Entertainment in four volumes. This review covers volume one, episodes 1-20.

The story begins in 108 B.C during a time when the Han Empire (China) had recently defeated the Gojosun Empire. With the ancient Korean empire under Chinese occupation, the neighboring Puyo Kingdom was not sure how to proceed. Puyo's King Haeburu (Park Geun Hyung) and his advisors knew that their kingdom could be next. They considered whether or not to make peace with the Han or prepare an offensive. One such man that led the battle against Han occupation was Haemosu (Hur Jun Ho). He was the leader of the Damul Army, a resistance group formed in the downfall of Gojosun. At first, Haeburu had no intention of helping Haemosu, but the Han instead. However, when Haeburu learned that his son Kumwa (Jeon Gwang Ryeol), the Royal Crown Price, was best friends and comrades with Haemosu, he decided to invite Haemosu into his ranks. But when it came to the king's attention that Haemosu's popularity was outgrowing his own, Haemosu became a target by the state and was killed.

In the aftermath, Puyo made peace with the Han, although it was uneasy with the Han having the upper hand as the superior fighting power. Drama ensued from key individuals tied to Haemosu. Prior to his death, he had fallen in love with Yuhwa (Oh Yeon Su), who was pregnant with his child. Kumwa, who also fell in love with Yuhwa, decided to take her as his concubine and pretend Haemosu's unborn child, Jumong (Song Il Kook)), was his own. Jumong became the third royal prince and the secret of his true identity was never to be revealed. 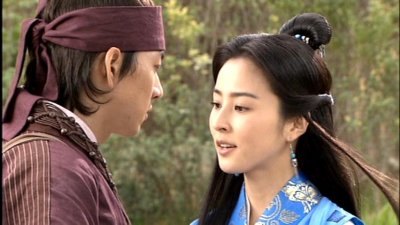 The story picks up twenty years later with Kumwa leading the Puyo army into another battle. Since the loss of his good friend Haemosu, Kumwa had dedicated himself to strengthening his empire to one day withstand the Han. His passion included developing stronger weapons (iron) to match the Han and expanding his territory. In his latest endeavor, his three sons join him on the battle front. Daeso (Kim Seung Soo) is eldest brother and the likely candidate to succeed the throne. He is a skilled warrior and master tactician. Youngpo (Woo Gi Jun) is the next brother, who faithfully acts to serve his brother's interests and sometimes his own. He is not as naturally gifted as Daeso and tends to be more a schemer, willing to bend the rules to get what he wants without fully realizing the consequences. Jumong is the youngest brother and he is a spoiled brat without proper manners or weapons training.

At this moment, Jumong's life slowly begins to change for the better. Jumong joins his brothers in battle, despite having no idea how to use a weapon. While in battle, Jumong almost dies, but his older brother Daeso saves his life. Afterwards, Queen Won (Gyeon Mi Ri), mother of Daeso and Youngpo, reveal to her sons how Jumong is a threat to their rightful places in the royal family. Jumong could become the next king and Daeso and Youngpo must do whatever they can to prevent it. They agree to kill him and leave him for dead in a swamp. Jumong is saved by Sosuhno (Han Hye Jin), the daughter of the merchant Yunbantal (Kim Byung Gi). She plays a love interest for Jumong and Daeso. After Jumong's near-death experience, he learns the truth about his brother's intentions. He returns to the place a different person--hardened and determined to overcome the challenges at hand.

Jumong then embarks on a path to fulfill his birth father's dream, which is to unite Korea and stand up against the Han oppression, although he doesn't know it is his father's dream. His mother fixes him up with Musong, who trains Jumong in military arts. Oddly enough, Musong is the director of a prison that has a familiar face within its walls, Haemosu! Later, it is revealed that Haemosu was never killed, but captured and kept hidden in an underground prison. He trains Jumong in the art of war when he surpasses Musong, while the two never know their true relationship. As the volume one episodes proceed, it focuses on Jumong and the challenges he overcomes, which include high amounts of drama and enticing fight scenes.

The drama in Jumong comes from several sources, although most are from key players within the palace who want Jumong out of the picture. Queen Won advises her sons in ways to kill Jumong. She is a cold-hearted character, although the actress Gyeon Mi Ri is nowhere near as conniving as her role in Dae Jang Guem. The two princes Daeso and Youngpo add their own levels of drama, as they both are intent in destroying Jumong. The situation is complicated further when Kumwa declares that he will not choose his successor based upon age, but rather the three sons must compete to win the title. Other drama that stemmed from the palace dealt with other schemers like the Prime Minister (Lee Jae Yong) and the sorceress Yeomieul (Jin Hee Kyung), who both had a hand in Haemosu's fall and play a thorn in Jumong's side. 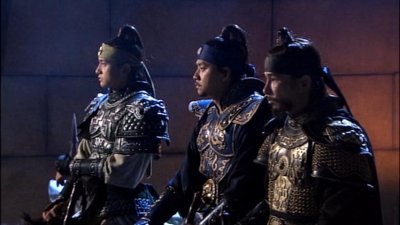 In addition to the general drama, there is love triangle with Jumong, Daeso, and Sosuhno. At first the love triangle is only a subtle plot point, but gradually becomes much more significant. The drama not only comes from both Jumong and Daeso having feelings for her, but Sosuhno coming to terms with her feelings and what is more important--marry for the good of her tribe and marrying the Royal Crown Prince or seeking happiness with the one she truly wants to be with.

Jumong, Volume 1 is an impressive start to a strong story. The initial storyline, developing the background about Haemosu, and then the development of Jumong becoming a strong warrior and leader are done very well. The dramatic aspects are enticing with a well-written storyline to keep your interest and the right amount of melodrama to keep you coming back for more. The acting performances are also generally good. There are a couple characters that are insignificant, but the main characters (who really matter) come off strong.

Another strong aspect is the cinematography and choreography. In regards to the former, the show is beautiful. The characters are graceful in rich and colorful costumes, as well as exquisite sceneries and settings. The latter addresses the fight scenes. A big part of this show is the battle scenes. There are a lot of sword fights with choreography that makes the action graceful and stunning. It is a very strong aspect that does not appear in most other K-dramas. In addition to how it looks, Jumong sounds beautiful. The soundtrack is good and enriches the drama and scenes as necessary.

Overall, Jumong, Volume 1 is a very good story that is easy to get into and hard to set down. I was very impressed with the beautiful characters and settings, the fight scenes, and the choreography. The acting performances and writing were also topnotch, with a few minor exceptions. In the end, Jumong, Volume 1 is a must-see for K-drama fans. It is exciting, enticing, engaging, and all-around fun. 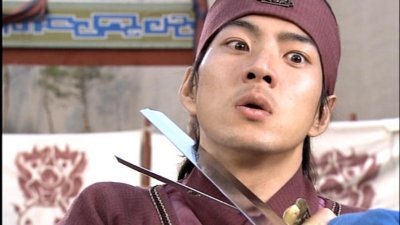 Extras:
For extras, the first episode from the popular historical K-drama Dae Jang Geum is included. In addition, there is a Jumong reference guide booklet that contains informative background about history and mythology behind Jumong, character descriptions, and actor/actress biographies.

Final Thoughts:
This review covered the first installment of four from the historical K-drama Jumong. The first volume has episodes 1-20, which introduced the key players, the general situation, and followed the growth and development of prince Jumong into a true hero. The story has intense drama with Jumong facing his evil brothers, corrupt political figures, learning about his true past, and a sordid love triangle. It makes for a great story that is easily worth the highest recommendation of DVD Talk Collector Series. Jumong, Volume 1 is amazing on many levels and will not disappoint K-drama fans.