A small troupe of street artists wanders through the Brazilian countryside attempting to make ends meet. Led by Lord Cigano (Jose Wilker) the Circus stops in a small town where Cico (Fabio Junior), a local accordionist, will fall in love with the troupe's Queen of the Rumba (Betty Farria). Cico and his pregnant wife join the artists and embark on a fascinating journey through the heart of a country with an uncertain future.

Carlos Diegues' Bye Bye Brasil (1979) is a film whose breathtaking beauty can not be denied. Filmed over 9000 miles the pic feels as a documentary whose only goal is to reveal to the viewer a side of Brazil which no camera has ever captured. Meticulous, full of color, and charged with political innuendo this is also the work of a man with a vision.

Completed at a time when Brazil was struggling to overcome a military dictatorship pic seems careful in stating the obvious. As the troupe rolls through towns and villages facing stiff competition from the latest technological advancement, the television set, Diegues' camera reveals a country shaken by economic hardship.

Pic's desire to be both entertaining and urgent is achieved through the introduction of a love affair whose end is predetermined - Cico and Salome's romance is short but intense.

Bye Bye Brasil's technical execution is impressive. Cinematographer Lauro Escorel provides a sense of finesse which some may find rather awkward. When the troupe's actions are not the focus of attention Brazil's landscape successfully takes its place.

The finale is particularly intriguing as it unceremoniously draws a line between past and present forcing the audience to reexamine pic's agenda. The juxtaposition of Brazil of the past with Brazil of the present, a colorful mosaic of images revealing a socio-cultural transformation well underway, is in sync with the main protagonists' greater appreciation of life at the end of their journey. 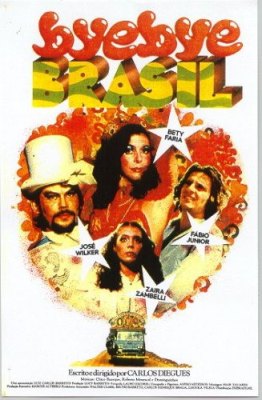 In 1980 the film was nominated for Palm d'Or at the Cannes International Film Festival.

Disappointing is the only word that comes to mind! Bye Bye Brasil appears to have been sourced from a VHS master and just about every aspect of this presentation is notably flawed. From contrast and color reproduction to edge-enhancement New Yorker's treatment is simply poor. The state of the print is equally disturbing! The film is presented in its original aspect ratio of 1.85:1 and enhanced for widescreen TVs but truth be told I have seen better looking VHS than this DVD. Inexcusable indeed!

Presented with Portuguese DD track and optional English subtitles the audio isn't far off the video presentation. It is uneven, and at times hollow-sounding. Dialog is mostly easy to decipher but the film's delicate soundtrack isn't addressed in an acceptable manner.

Aside from the theatrical trailer for this film there is nothing else to be found here.

An important film with a great and revealing story Bye Bye Brasil has received an insulting presentation. There is nothing more I need to add to this review aside from urging you not to spend your hard-earned cash on this disc.