Set during the early 80s Spanish production El Calentito (2005) attempts to create a believable portrait of a state divided by politics.

The story of El Calentito evolves around a loud and provocative female punk band in a process of securing a record contract. A day before the band is to perform in front of a powerful studio exec one of its members walks away. At the club where Las Siux reside Sara (Veronica Sanchez, The Two Sides of the Bed), a self-confessed virgin with an attitude, is picked to fill the void. The audition goes well but the Spanish military stages a coup-de-tat.

Beautiful Spanish actress Veronica Sanchez delivers a memorable performance in Chus Gutierrez's latest pic whose zesty protagonists will likely catch a few viewers off-guard. Transvestites, rocking latex-clad nuns, and political reactionaries are all part of a colorful story the great Almodovar would have been proud to direct.

Pic's flirtation with sensitive Spanish themes (Franco, the military, La Democracia) is masterfully hidden under a conventional storyline where an introverted girl discovers love in the most unusual of places: a rock club.

Humor, an integral part of El Calentito, is a byproduct of Gutierrez's desire to play on two fronts. Seen exclusively as a comedy pic offers enough kinkiness to sustain the interest of those unfamiliar with Spain from the 80s, digested as a political satire pic is openly dismissive of the far-right and especially the Franco regime.

Pic's use of color(s) is astonishing. Like a lush Spanish fiesta El Calentito is saturated with color(s) serving an important role in enhancing Gutierrez's vision of Old Spain versus New Spain.

Cinematographer Kiko de la Ruca (Sex and Lucia) provides a much-needed sense of elegance in a film whose destructive punk-rock soundtrack occasionally feels a tad out of tune. The club scenes, however, are exemplary nearly throwing the rest of the story off.

Sex, a perpetual subtheme, is everywhere but never degrading. It is elegantly shot even when the nuns get rowdy! 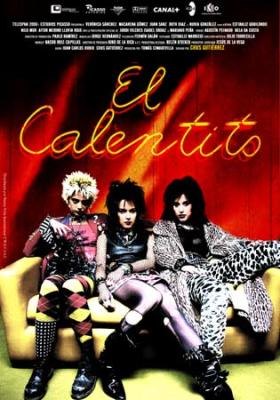 Presented in its original aspect ratio of 1.85:1 El Calentito's R1 release has not been enhanced for widescreen TVs. This is very unfortunate as the image quality is indeed disappointing: soft image, shaky contrast, plenty of color instability is what we have here. In addition, I was also able to spot some extensive "blurring" suggesting what TLA Releasing are now known for - improper sourcing. The print also reveals unusually strong macro-blocking which those of you with more sensitive home equipments will find upsetting.

The film is presented only with a basic Spanish 2.0 track even though the R2 Spanish disc offers a more elaborate 5.1 track. This is clearly a missed opportunity as far as I am concerned given the important role music has in this film. What is even worse is that the English subtitles appear to be fixed.

What we have here is the pilot-music video that ran on Spanish cable networks prior to the film's release in addition to a basic picture gallery and the Spanish original trailer.

El Calentito captures flawlessly everything Spain went through during the early 80s: the political uncertainty, the escape from traditional values, the rise of a new generation willing to make a change! Superb!
Sadly TLA Releasing, who I have continuously supported on this site, once again deliver a mediocre transfer. Which is so, so unfortunate as I like everything about this release (excellent design, coverwork, translation, etc.) but the transfer! I am forced to recommend that you seek the Spanish anamorphic and English-friendly disc if you wish to own the film and only rent this R1 release if you happen to be region-locked.