Don't Look for Me

A young and innocent looking assassin prepares her final hit. When she falls for the wrong guy however her retirement plans take a dive.

The main protagonist in Tilman Zens' Such Mich Nicht a.k.a Don't Look for Me (2004) is a cold and senseless contract killer whose professionalism is never questioned. Anna (Lea Mornar) studies her job, takes the necessary precautions, and executes. When she unexpectedly gets involved with a handsome hotel clerk (Stipe Erceg) however who helps her get back on her feet her cold heart fails her.

Films about scrupulous assassins undergoing character transformation seem to follow a predictable route; from the inevitable love affair to the mandatory professional slip these are stories that combine raw action with melodrama. The better ones also provide an expert-opinion on the technical side of killing.

Despite some interesting character flaws that bring much needed oomph to this otherwise static production there isn't much in Don't Look for Me that has not already been done better and in more convincing fashion. The romantic affair between Anna and her unassuming lover for example, supposedly pic's pivotal point, takes a surprisingly small fraction of the narrative yet it produces a dramatic change, one that also wraps up the story with a poorly-scripted shootout scene. 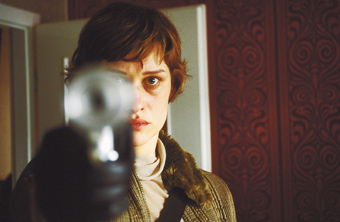 Evoking parallels with Mennan Yapo's Lautlos a.k.a Soundless, another recent German production about a serial killer who falls victim of his emotions, Don't Look for Me also lacks a proper dose of intensity. As a result neither action appreciative filmgoers nor arthouse aficionados are likely to embrace pic's pretentious style.

On a positive side a cold and unfriendly environment with a distinctive East-German feel (tall and grey Communist-style apartment buildings, cheap hotels, etc) matches perfectly the neo-noir vibe from the opening scenes. Unfortunately, pic quickly descends in a sea of clichés revealing a flawed script with little imagination.

In 2004 the film won the Promotional Award-German Film (Stipe Erceg) at the Munich Film Festival.

Presented in an aspect ratio of 1.85:1 and enhanced for widescreen TVs this appears to be yet another one of those improperly sourced prints Image are now known for. A quick look at this disc revealed what I was certain would be the case: an interlaced transfer. In fact, "combing" is much stronger than what I have previously seen on other Image-produced discs. The actual print appears to be in relatively satisfactory condition as there are no damage marks (debris/scratches) and contrast is rather well handled. The color-scheme is difficult to judge as some of the grittier colors appear to be intentionally manipulated (a variety of greys in particular). Edge-enhancement was slightly stronger for my taste but to be honest this is the last issue of this presentation I would be concerned with. As mentioned above the main flaw here is the improper conversion.

A German DD track has been provided here with optional English subtitles. The dialog is easy to follow and I did not detect any disturbing flaws with the presentation. The translation is very well done.

Unfortunately there are no supplemental materials on this DVD release.

A slightly above average thriller whose promising first half quickly succumbs to annoying stereotypes is likely to remain unnoticed. The presentation is on par with the film, average at best, but disappointing in the eyes of this reviewer (who misses HVE).