New Adventures of Superman, The

"Even the awesomeness of Superman can't stop this train wreck" -David W.

That was the reaction of a friend's child who came over and screened some of the first season of The New Adventures of Superman with me and my kids.  I had fond memories of the show from when I was four and five years old.  Foggy memories, but fond ones none the less.  Seeing Superman battling monsters and aliens was great back in the late 60's, but the crude animation style and simplistic (and often nonsensical) stories don't do too much for today's children.  Add to that a poorly produced DVD set that omits 1/3 of each episode of the show, and you've got a set that should be passed by. 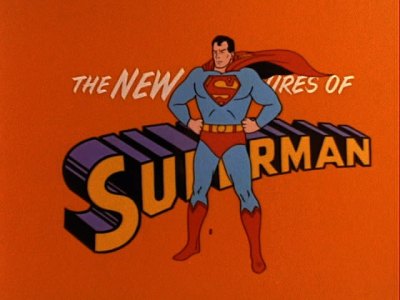 In 1965 28-year old Fred Silverman became Vice President of Daytime Programming at CBS.  One of the first things he focused on was the network's Saturday morning schedule.  Previous to his time at the network, Saturday mornings had been written off.  The programming consisted of children's cartoons and it wasn't seen an important slot.  Silverman had different ideas.  He wanted to create a strong line up and go head to head with the other networks, especially ABC who had a hit on their hands with The Beatles.  One of the key cartoons he was banking on to help win the ratings race was The New Adventures of Superman.  An incredibly popular character, the 50's TV show was still in syndication and doing well.  It was a natural for a cartoon.  (Of course the Man of Steel had been animated before by the Fleischer Studio.  They made a series of 17 Superman cartoons that were released theatrically between 1941 and 1943 and are still the high mark for the superhero animation.) 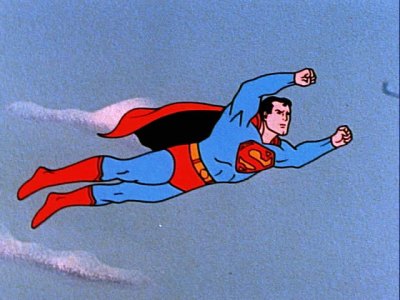 The studio tapped for making the show was Filmation.  This would be their first TV cartoon, previously they had concentrated on commercials, and the start of a long career in producing Saturday morning fare.  By using a very limited animation style and reusing the same shots over and over, the studio was able to crank out The New Adventures of Superman on time and on budget.

The show has a lot going for it.  The character designs are very good; they're colorful and impressive and look a lot like their comic book counterparts.  Superman also has a good assortment of villains taken from his four color adventures too; Toyman, Brainiac, Mr. Mxyzptlk, and Lex Luthor all make appearances.  Filmation was also able to get Bud Collyer to reprise his radio role of Superman/Clark Kent (he also voiced the Man of Steel in the Fleischer cartoons.)  Collyer is one of the best Kent/Superman actors ever, and the way he changes his voice from one character to the other when saying "This is a job...for Superman" is still impressive today.  Joan Alexander, who played Lois in the long running radio show, also returned. 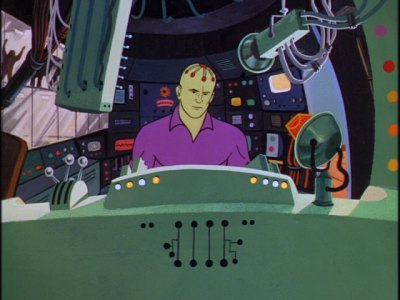 Unfortunately, the show hasn't aged well and is more likely to induce laughter than awe when viewed today.  Part of the problem is the format.  The New Adventures of Superman originally ran for a half hour including commercials.  There were two six-minute Superman segments with another six-minute Superboy story sandwiched between them.  (The rest of the time was taken up with the opening and closing credits and commercials.)  It's hard to come up with a decent story that lasts only six-minutes, and these cartoons are very simple in their plots:  A monster appears, Clark Kent hears about it, changes into Superman, battles and defeats the beast.  Add a really lame pun at the end and you have your episode.  These simple plots were accompanied by some pretty stupid situations that are comical when viewed today.  A pair of prehistoric giant Pterodactyls, much larger than jet planes, appears in one episode and are able to shrug off multiple direct hits from air-to-air missiles.  In another episode Lex Luthor created some magic marbles that when thrown on the ground would turn him into an 8 year old boy for 15 minutes.  He used these to hide from the police after robbing banks and armored cars.  In one part Superman even sees Lex as a child holding a bag full of money outside of a bank that has been robbed but doesn't stop to question him or even take the money back.  Were kids really that dumb in 1966?

Worse than the poor scripts, which still have some nostalgic charm, is the animation.  Filmation cut every corner that they could.  Scenes of Superman flying and walking are used again and again and again.   Not only that, but Superman doesn't even more during a lot of these.  They just move a still image across a background.  When people do move they are stiff and awkward and no one moves in a realistic manner.

The nail in the coffin for this DVD set however is the fact that these shows are incomplete.  The New Adventures of Superman, as mentioned earlier, was comprised of two Superman shorts and a Superboy adventure.  The Superboy cartoons are not included in this set.  I can't imagine why they would edit out 1/3 of the show (I can only assume that there may be a problem with the copyrights) but that is simply inexcusable.  Almost as a way of rubbing salt in the wound, the set does accidentally include the intro to a Superboy cartoon right after The Fire Phantom.  Unfortunately the cartoon itself isn't included.

The first season, which contains 36 six-minute shorts, comes on two DVDs which are housed in a single width pressboard case.  The two discs lay on top of each other, one covering half of the other one, on one side of the case.  I really hate overlapping discs and wish that they had chosen another design.

This show comes with its original mono soundtrack.  While it wasn't horrible it wasn't great either. The dynamic range was very, very limited.  Both the highs and lows are clipped off, and the whole production sounds tinny.  There is only a faint amount of background noise, but there is some light distortion in a few places, obviously

The full frame image isn't that impressive.  They found some nice prints to make this set, but the video hasn't been restored and so the picture leaves something to be desired.  First off there are dirt spots through out every cartoon, and the image has faded a bit.  Superman's costume isn't as bright as it should be, though I've seen cartoons that have faded much worse than these.  Grain is a big problem.  It looks like these shows were blown up from a 16mm print as every shot is grainy, and patches of color aren't even and solid.  Though this could be just the way the show looked.  Filmation didn't worry a lot about the quality of their product; notice the hair on the right side of the screen in the picture of Superman flying above.  The image is also rather soft too.  Overall this isn't a horrible looking, but it isn't great either.

This set also contains a single featurette, Superman in '66, a look at the history of the Last Kryptonian from his start in the late 30's until this 1966 cartoon.  Superman scribe Mark Waid is interviewed as well as Filmation founder Lou Scheimer and actor Mark Hamill.  There's a little too much pseudo-intellectual analysis of the character's popularity, (at one point someone claims that when the Russians had Sputnik up in space, people felt better because we at least had Superman) but it is still a nice overview of the character.

Though I really enjoyed this show as a child, I have to admit that today's children will find it dated.  With jerky animation, simplistic and often idiotic stories, and silly dialog, it just doesn't fare well.  I'd like to be able to recommend this for adults who want to relive those Saturday mornings of 40 years ago, but I can't.  This set has a sound and picture quality that is mediocre at best, but worst of all they have excluded the Superboy segments from this show.  With 1/3 of the show missing, it is best if you skip this set.