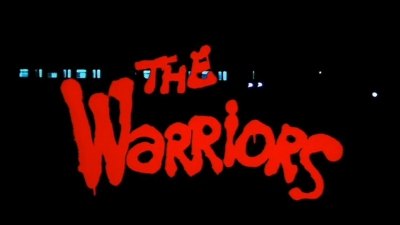 The Movie:
Walter Hill insists that he always wanted his 1979 macho action classic The Warriors to look and feel like a comic book, but after watching his 2005 Ultimate Director's Cut reworking of the movie, I get the feeling that the man has never actually read a comic. The film's cartoonish influences were always perfectly clear (the last time I checked, there weren't too many gangs dressed like mimes roaming the streets of New York City), but the new comic panel inserts the director has added just go too far. They feel out of place and drag down the pacing. Fortunately, the bulk of the picture remains intact as it's remembered, and even with these annoying revisions the movie is still a lot of fun.

"Sometime in the future....", a future that looks just like the late '70s, all the toughest gangs in New York City send teams of representatives to an assembly in the Bronx, sort of a United Nations of street crime. A smooth-talkin' cat named Cyrus has gathered them together to unveil his vision of mutual cooperation, where the hundreds of smaller factions like the Gramercy Riffs, the Turnbull A.C.s, the Punks, the Lizzies, and the Boppers can join forces to take over the city. He's a charismatic Christ-like figure, and were it not for a psycho nutcase from The Rogues who snuck in a gun, he might have pulled it off. When a shot rings out and Cyrus falls, the place erupts into chaos. Seizing an opportunity, the shooter points the finger of blame at innocent bystanders The Warriors, a group of Village People wannabes from Coney Island. Realizing that nobody wants to hear their side of the story, the boys make a run for it. But it's going to be a long, hard trek back to Coney with every other gang in the city on their tails.

Colors this is not. Pretenses about any sort of realistic depiction of gang life go out the window pretty quickly.

The story is clearly patterned as a fable, and very loosely based on the ancient Greek legend of Anabasis, in which an army of mercenaries are trapped in enemy territory and besieged by rival forces from all sides. In Hill's wacko universe, all the gangs of the city wear themed costumes, from the simple butch sleeveless leather vests of The Warriors to the iconic Baseball Furies, a group of crazies in Yankees uniforms and KISS makeup. There are mimes, kung-fu squads, skinheads, farmers in overalls and rollerskates, and at least one team that look like they should be performing on Solid Gold. It's entirely preposterous, but the movie makes it work, each ridiculous-looking foe a convincing threat to our heroes. You figure, a fella's got to have some real balls and a couple of screws loose to go trawling city streets at night dressed like some of these loonies do.

The Warriors was made for very little money, shooting on the real streets of New York with a cast of unknowns, a few of which (James Remar, David Patrick Kelly) would go on to have successful careers as character actors. The most recognizable face in the cast is future Oscar-winner Mercedes Ruehl (The Fisher King), who has a small part midway through the picture. By modern action movie standards, the pacing drags a little and the fight choreography is pretty rudimentary, but the film has plenty of attitude, style, memorable dialogue ("Warr-ee-orrs... Come out to plaay-aay"), and a totally unique vision that's helped it to endure. Thirty years later, it's still an entertaining ride.

The Blu-ray Disc:
The Warriors has been released on the Blu-ray format by Paramount Home Entertainment. The disc contains only the Ultimate Director's Cut version of the movie, not the original theatrical cut. A comparable HD DVD is also available.

Video:
The Warriors Blu-ray is encoded in High Definition 1080p format using MPEG4 AVC compression on a single-layer 25 gb disc. The movie's theatrical 1.85:1 aspect ratio has been slightly opened up to fill a 16:9 frame with negligible impact to the composition.

I almost can't believe that a movie of this age and budget could possibly look so good. The High-Def transfer is simply stunning. The picture is amazingly sharp and detailed, with vivid colors, inky black levels, and plenty of depth. The source elements are spotlessly clean, and the minimal amount of grain is well rendered. The picture looks so nice you'd swear the movie was shot yesterday with a healthy budget.

If I really have to nit-pick, a couple of shots during the final scene exhibit some minor edge ringing, but it's barely problematic and not worth complaining about. Otherwise, I couldn't find any flaws. The Warriors is truly a revelation in High Definition.

The Warriors Blu-ray disc is not flagged with an Image Constraint Token and will play in full High Definition quality over a Blu-ray player's analog Component Video outputs.

The film's original mono theatrical mix has not been included, which is frustrating, though as far as remixes go this one isn't too obnoxious. The majority of effort was spent remastering the score into true stereo, and it sounds pretty good. A small handful of sound effects have been steered around the soundstage, usually tastefully. For the most part the track remains monaural.

Unfortunately, while the video quality belies the movie's age and budget, the audio's fidelity is seriously dated. Dialogue is extremely thin. Explosions and other sound effects that deserve bass are anemic at best. The big riot scene stands out as especially limited, shrill, and just plain poor. Considering the movie's origins, some of this can't be helped, but it also sounds like too much noise reduction has been applied to filter out hiss, and this leaves parts of the soundtrack muffled. A big disappointment here.

Extras:
The bonus features on this Blu-ray title are duplicated from the DVD edition. All of the supplements from the Ultimate Director's Cut DVD have carried over. The video featurettes were produced by Laurent Bouzereau and feel like they were designed as one long documentary that's been split into pieces. 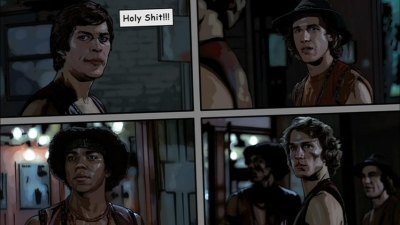 Final Thoughts:
I can't get over how terrific The Warriors looks in High Definition. The movie itself is still great fun, and the disc comes with some decent bonus features too. I dig it, baby, I dig it. Highly recommended.