I'm not a huge jazz fan, and even less of a fan of "light" jazz.  People like Kenny G and Dave Koz put me to sleep, so it was with extreme trepidation that I popped in Chris Botti: Live.  Not really familiar with his music, but having heard his name, I was expecting some lame elevator music.  Much to my surprise the disc consists of a first rate musician playing some classic tunes that are sure to please.  The Blu-ray disc looked good and sounded fantastic too.  Long time fans and newcomers like me are sure to enjoy this fun concert. 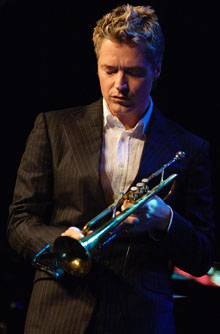 Chris Botti is a trumpet player who has an impeccable pedigree.  After attaining a degree from the Indiana University music program, Botti became a session player and worked with such luminaries as Artie Shaw, Aretha Franklin, and Bob Dylan.  He joined Paul Simon's band in 1990, and toured with Sting in 2001.  During that time he also released several solo albums, many of which have met with critical acclaim.

For this concert, Botti has gathered together a group of talented musicians to back him up and arranged for some big name guests including Sting, Burt Bacharach, and Gladys Knight.  The set starts of slow, with a Someone to Watch over Me but the tempo soon picks up.  Highlights of the show include Renee Olstead singing Pennies from Heaven that is powerful and impressive.  This is one of those songs that you'll cue up just for fun after the disc is finished.  Sting does a great job on What are You Doing for the Rest of Your Life, showing that he really can sing, as if any more proof was needed.  Other standards such as My One and Only Love and Good Morning Heartache are performed with style and verve.

There were only a couple of songs that didn't quite hit the mark.  Are You Lonesome Tonight, a song made famous by Elvis Presley, came across as a bit cheesy in my opinion, and Sting's rendition of My Funny Valentine wasn't as impressive as his earlier song.  (Then again I've never liked the tune, so my bias could be weighing in.)

When all is said and done, this is a pretty fun concert.  Even people who are not familiar with Botti's music will enjoy it.  The songs he selected will be familiar to most viewers and the musicians who work with him are all first rate.

The songs included in this concert are:

Filming a live concert is never easy.  Lighting that looks great from 20 rows back can be harsh and unforgiving when the camera is only a few feet away from the performer, and while fog can look cool pouring over the stage, it can be horrendous if it's pouring over the camera lens.  I'm always willing to cut the director and cameramen some slack on live performances since it is so difficult to get it right.  Much to my surprise, I don't have to make any excuses for this disc.  Filmed on HD cameras, this concert looks fantastic.  The blacks are solid and not crushed, the colors are bright and vivid and the level of detail is excellent.  You can see the lines around Botti's eyes appear when he's blowing those high notes and see the light playing off his trumpet.  Even more importantly the light isn't too harsh and overpowering the way it is with some concerts.

On the digital side, things look pretty good too.  There isn't any posterization or blocking, even when you're looking at low light areas in the background.  The only defect was some slight aliasing in a couple of places.  A musician's stripped shirt was a little jagged in spots but it was only apparent if you were looking for it.  Taking everything into consideration, this is a very good looking disc.

Concerts never sound as good as a studio album, but this one impressed me.  The PCM 5.1 track was simply awesome.  Even if you don't like his music, it is hard to find fault with the fidelity of this release.  The imaging is spot on, if you close your eyes you can 'see' where each instrument is located on the stage.  The range is very large, with the drums sounding rich and full.  Check out the drum solo during "Why Not" for a good example of this.  The highs are just as clear and precise with Botti's trumpet sounding particularly sweet.  This is just an impeccable recording.

There are a few neat bonus items that fans of the musician will surely eat up, all of it presented in HD, which is very nice too.  First off is a "Behind the Scenes" documentary that runs about half an hour.  This features back stage clips along with interviews with the musicians.  There is a heavy "fluff" element, with everyone saying how great it is to work with everyone else, but there's enough meat in the piece to make it worth watching,

Next up is "Interview with Chris Botti", which runs a tad less than 20-minutes and is the whole interview that was used for the clips in the "Behind the Scenes" piece.  As such there's a lot of repetition, but I was happy to see the whole interview included.  "Meet the Musicians" is a short introduction to Botti's backup band.  My favorite extra was concert footage of the song "Message in a Bottle".  A fun and interesting version of the classic Police song, it's a shame that they cut it from the concert itself and I'm glad it was included in the extras.

Even though I'm not a big jazz fan, I was still impressed with this disc.  The audio and video qualities are excellent, which is saying a lot since this is a live concert.  The song selection is good for novice viewers too.  Long time jazz fans may roll their eyes at the standard songs that are played, but Botti and the band supporting him do an excellent job.  If you're looking for a disc of good music that shows off the image and sound quality of Blu-ray discs, this would be an excellent choice.  Recommended.