Co-produced by Austria, Italy, and Germany tale about two teenagers obsessed with violence. Pic carries plenty of potential and first time writer-director Eva Urthaler is a name to be remembered.

After Sebastien (Sergej Moya) and Paul (Ludwig Trepte) become close friends they abduct 30-year-old Sonya (Elisabetta Roncchetti) and drag her to an abandoned factory with an impressive pornographic collection. There, the victim is tied up, played with, and eventually released. During the course of the game the two friends collapse under the weight of emotions they are unable to rationalize.

Out of Hand a.k.a Keller-Teenage Wasteland (2005) is a rough, disturbing, and powerful film about teenage angst whose mature look anything but suggests that this is the work of a director with no previous experience behind the camera. Avoiding genre clichés yet exploring territories which traditionally have an effect on authenticity pic remains well grounded, unshaken by populist statements. 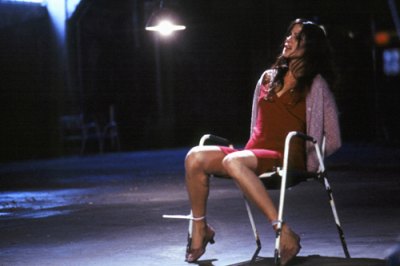 There are precisely two aspects separating Out of Hand from most every other film exploring similar themes:

First, it is the incredible sense of control Eva Urthaler reveals - her story is impeccably balanced with absolutely no sugarcoating added whatsoever. The violence is nerve-wrecking and believable while the actors act as if the camera is non-existent. The effect is terrifying.

Second, the multi-layered construction - while pic walks a familiar path a subplot is introduced focusing on an impossible relationship saturated with homoeroticism. Thus, Out of Hand allows for different viewing angles, each equally impressive and convincing.

Pic's greatest strength comes from the introduction of complex emotions the two protagonists, an unlikely duo to say the least, struggle to control. The logical sporadic bursts of anger resulting in extreme violence are countered with awkward moments of affection not typically seen between two teenagers.

In 2005 the film was nominated for Golden Leopard (Best Director) at the Locarno International Film Festival. In 2006 the film won the Best Young Actor Award (Ludwig Trepte) at the Max Ophuls Festival and the Best Actress Award granted by the National Syndicate of Italian Cinematographic Journalists.

Presented in its original aspect ratio of 1.85:1 and enhanced for widescreen TVs the film looks fabulous. Excellent color gradation with a delicate contrast, very much in synch with the film's gritty nature, the treatment PictureThis have provided is indeed outstanding. The progressive transfer is also free of any damage (dirt, specks). Edge-enhancement is not an issue of concern here allowing the viewer to truly focus on the story. As far as I am concerned this is a good of a presentation one could've hoped for.

Presented with a German 2.0 and 5.1 tracks the audio is just as impressive as the video treatment. Crystal clear and very easy to follow dialog is what we have here. The surround channels are not overly active but such is the nature of the film, dialog-driven and notably devoid of special effects. With optional, very well done, English subtitles.

Aside from the theatrical trailer what this disc offers is a lengthy interview with the two main actors, Ludwig and Sergej (his comments are in English), where they touch upon the overall experience they had with the director, the complex themes the film deals with, and their personal reaction to many of the "problematic" scenes seen throughout. There is also a short "Behind The Scenes" fragment which mostly follows the cast and crew on location.

An emotional rollercoaster introducing a director with enormous potential! Out of Hand surprises with a compelling script and a top-notch cast!
I have become a great fan of PictureThis and their selection of films. Always edgy, always pushing the envelope, never disappointing. The company's serious dedication to quality transfers is also another reason why I am always excited to see another one of their discs. Highly Recommended.