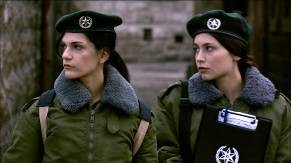 A persuasive look at the life of two Israeli women-soldiers who struggle to endure the complex socio-political reality of a state constantly on the brink of war. Pic does an admirable job of handling a delicate subject with utmost precision and a sense of truthfulness.

Smadar (Smadar Sayar) and Mirit (Neama Shendar) are asked to patrol together the streets of Jerusalem after they both do a poor job of following the orders of their superiors. They must observe and recognize suspicious behavior, perform a routine check of IDs, and submit their findings to Dubek (Irit Suki), a coldhearted supervisor with an explosive demeanor. When the city quickly offers a dose of reality, a deadly terror attack in the area patrolled by Smadar and Mirit, the duo is faced with a difficult dilemma.

Directors Vardit Bilu and Dalia Hager's Karov La Bayit a.k.a Close To Home (2005) strives to deliver an authentic look at the life of Israeli women and their struggle to lead a normal life while serving in the military. Part drama, part comedy pic quietly reveals a world where most everything women in America take for granted is seen as luxury, a privilege that needs to be earned.

Close To Home however is far from being a moralistic piece of propaganda deliberately creating a sense of discomfort. Yes, there are moments when portions of the dialog are overly-dramatic resembling poorly recited political statements. Yet, an overall sense of authenticity permeates the storyline allowing for different viewing angles where most other films dealing with similar subjects collapse with a bang (LaLehet Al HaMayim).

The ongoing debates between Smadar and Mirit represent a major fraction of Close To Home and constantly subdue the nagging terror threat (it seems like the two directors have intentionally pushed their story away from disaster even though most of the film is influenced by it) the audience is bound to experience. On a negative side the film does little to overcome a justified unfriendly attitude towards anything Arab (the opening scenes are particularly revealing).

At the end it is hard to imagine that Close To Home will leave a memorable impression on those who have not been directly exposed to the hatred dividing Jews and Arabs. The use of political clichés is also a factor some viewers will find difficult to disregard.

In 2006 the film won the C.I.C.A.E award (Forum of New Cinema) at the Berlin International Film Festival. During the same year the film also won the Best Screenplay Award at the Jerusalem Film Festival.

Presented in its original aspect ratio of 1.85:1 and enhanced for widescreen TV's the print provided by Genius Entertainment is progressive, properly converted, and without any substantial damage. Colors are mostly well-rendered while edge-enhancement does not appear to be an issue of concern. The print does reveal however a rather soft look which especially during the night scenes also breaks down. Overall, this remains an acceptable presentation which should meet the quality expectations of those you with more sensitive home set-ups.

Presented with a Hebrew DD track and optional English and Spanish subtitles (as well as English HOH) the audio is in healthy condition. Dialog is easy to follow and I could not detect any disturbing hissing/dropouts.

Unfortunately, there aren't any supplemental materials on this DVD release.

A quiet and realistic film about two Israeli soldiers Close To Home provides a look at a world where a lot seems incomprehensible. Even for the two main protagonists, Smadar and Mirit, who are faced with some difficult to solve dilemmas. Unfortunately in its quest for authenticity the film resorts to old clichés that are likely to turn off undecided viewers.