A bitter-sweet tale about a poor man from Manchester who must save enough to buy his daughter a Communion dress Raining Stones is director Ken Loach's least political work to date. 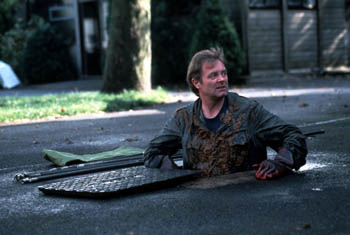 Proud but poor Bob Williams (Bruce Jones) must find a way to buy his daughter a Communion dress. It is the right thing to do. But...he is jobless, without a penny in the bank, and with nothing he could sell for money. It is time to get creative!

Filmed in the heart of working-class Manchester Ken Loach's Raining Stones (1993) is everything a great picture needs to be: thought-provoking, entertaining, marvelously acted. It is also a film that bursts with authenticity introducing a protagonist whose misfortunes could be part of anyone's life.

Loach has made plenty of films about poverty and social injustice (Riff Raff, The Flickering Flame) but none of them rely on humor as much as Raining Stones does. In fact, the sense of desperation that is often felt throughout the British director's work is effectively subdued here thanks to a never-ending string of hilarious gigs Bob and his partner get involved with all in the name of the almighty quid.

The film also shows a great understanding of the brittle psychology low-income workers possess. Here Bob's faith, determination, and enthusiasm are countered with disappointment, pain, and desperation fueling irrational decisions with dangerous consequences. As a result the perilous predicament Bob eventually finds himself dealing with does not come as a surprise.

Raining Stones benefits from an excellent cast whose performances are practically flawless. The actors maintain a perfect balance between comedy and drama, with a script often necessitating improvisation, thus effectively controlling the tempo of the story - the two overlap each other and especially during the second half the film flows particularly well. 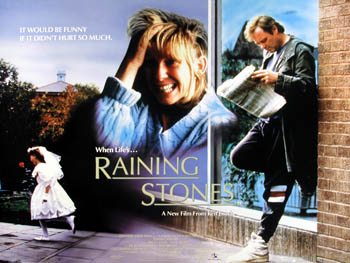 Finally, even though Raining Stones deals with a sensitive subject matter that could have spurred some unneeded and likely biased political statements Loach remains notably quiet with his camera. Most if not all of the imagery here speaks for itself in a much more convincing fashion than one could have hoped for. The result is an electrifying film with real characters dealing with real troubles. Just as life is.

Presented in its original aspect ratio of 1.66:1 and enhanced for widescreen TVs the transfer provided by Koch Lorber Films is good but not solid. The intended grainy look is preserved and contrast appears satisfactory yet I could not help but notice that there is a substantial amount of dirt and specs marring the presentation. The progressive transfer on the other hand is solid and I could not detect any conversion issues. Edge-enhancement isn't an issue and those with larger set-ups should be pleased with the transfer. Still this is a notable improvement over the old transfer available in R1 land. Overall a good presentation whose only area of criticism is the presence of the dirt/specs pointed out above.

Presented with an English DD track the audio is solid without any hissing or dropouts that I could detect. Koch Lorber Films have appropriately provided optional English subtitles here which I found to be very useful given the thick accents heard throughout. In addition the distrib has also provided a separate HOH track (subtitles for the deaf and hearing impaired).

Unfortunately the only extra on this disc is the original theatrical trailer (in addition to other trailers for Koch Lorber Films distributed material).

Arguably one of Ken Loach's most accessible films, poignant and electrifying, Raining Stones is not to be missed. The DVD presentation is adequate though there is certainly room for improvement here.