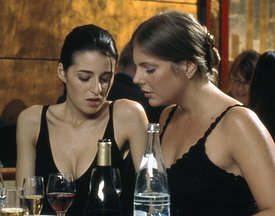 Brash, explicit, and somewhat abstract exploration of female sexuality Jean-Claude Brisseau's Les Anges Exterminateurs a.k.a Exterminating Angels (2006) will surely disappoint audiences whose tolerance for explicit sex ends with Last Tango in Paris. Pic's flirtation with surrealism however should provide plenty of defensive arguments for arthouse aficionados who might feel the urge to support it.

Francois (Frederic Van Den Driessche) is committed to finding the perfect actors for his upcoming film. The cast, women capable of playing out their sexual fantasies while being filmed, is selected through a series of revealing interviews. When the finalists are chosen Francois finds himself in the middle of a complicated game of egos observed by two biased angels.

It is difficult to determine whether Brisseau's latest film is indicative of the director's personal experience with the film industry. The carefully observed casting could indeed be what Brisseau experienced while seeking the perfect actors for his scandalous Choses Secrets (2002). The degree of uncertainty between cast and director, the sexual provocations, the inevitable painful altercation between the two sides seen here are all aspects of an experience the French director was arguably a part of.

A secondary much more complex reading however is required to explain the presence of two mysterious angels who appear only when Francois is becoming too close to the cast. Whether they are to be seen as the angels of morality (very unlikely) or simply as a reminder that everything taking place behind the scenes is and will be seen is quite an interesting approach to the so called "creative process".

What this film is not is a self-confession. The accusations of sexual-harassment which surrounded Brisseau after the completion of Choses Secrets do not appear to have softened the director's preference for graphic imagery. In fact, Les Anges Exterminateurs is far more provocative than anything the director has filmed to date effectively granting moralist-watchdogs the right to question its artistic integrity.

The film's strongest point also isn't its ability to downplay sex when so much depends on it. Furthermore, it is quite clear that this is not a film about the two sexes either though they are seen colliding, struggling with old clichés. Les Anges Exterminateurs is a film about creating under extreme circumstances, absorbing the pressure of breaking moral taboos, and being intimate without initiating a physical contact.

How Does The DVD Look?

Presented in its original aspect ratio of 1.33:1 the print provided by BlaqOut is practically flawless. Excellent degree of contrast, lack of edge enhancement, and a marvelous color scheme is what we have here. The print is progressive and I could not detect any damage marks, scratches, etc. This is simply a great looking disc of exceptionally high-quality. The distrib has also provided the option of setting you're an entirely English, French or Portuguese-friendly interfaces. PAL-encoded, Region 2.

The distrib has provided an excellent French DTS track as well as DD 2.0 mix. Both very well mixed as dialog is easy to follow and I could not detect any issues worthy of our attention. The disc also comes with optional French, English, and Portuguese subtitles.

There is an excellent interview with Jean-Claude Brisseau and his editor Lisa Garcia titled Cinema according to Brisseau (total of 42 min) in which the director discusses the message of the film, the elusive role of sex, some of the intended ambiguity found in the original script (the entire interview offers optional English and Portuguese subtitles). In addition, there is one deleted scene as well as the original theatrical trailer.

I enjoyed this film a great deal. It is both provocative and suggestive allowing the viewer to experiment with different thoughts about sexuality, the arousing effect of forbidden sex. The actual presentation by BlaqOut is, as expected, top-notch. Highly-recommended.