The Movie:
Luc Besson's fizzy, Europop sci-fi extravaganza The Fifth Element has been a popular home video staple for good reason. Its brightly colored, comic book production design and over-the-top visual effects make transfixing home theater eye candy. Even more importantly, the movie is gloriously goofy entertainment that never takes itself seriously for a second. Bruce Willis stars in the typical Bruce Willis action hero role, trapped inside an unabashedly cornball spectacle featuring flying cars, alien monsters, lots of explosions, a hot chick who kicks ass, and an impending apocalypse of pure evil that can only be defeated by love, man, true love. How freakin' awesome is that? The director first conceived the movie when he was still in high school, and some 20-odd years later made absolutely certain not to dilute the purity of that original geeky vision by watering it down with things like serious adult drama or good taste. Thank heavens. The movie is brash, loud, juvenile, and loads of fun.

I won't waste time recapping the plot, because odds are that most reading this have seen the movie a dozen or so times. Part of the enjoyment is that the film is just so fascinating to look at. Practically every frame is cluttered with little details that take several viewings to notice, and the whole thing has a distinctly European flavor in refreshing contrast to the generally dour, distopian future we see in most American science fiction movies. Although it steals liberally from and shamelessly spoofs the likes of Blade Runner and Star Wars, The Fifth Element is clearly a natural extension of famous Euro cheesefests Barbarella or Danger: Diabolik. The genius of its visual design is that it was always intended to look hokey. A decade after its original release, the overabundance of cartoony CGI hardly feels dated at all because of the way Besson seamlessly integrates it with the comic book-styled, pop art sets and crazy costumes by Jean 'Moebius' Giraud.

Bruce Willis anchors the film as the world-weary, sardonic cabbie-turned-universe-saving-hero, and of course delivers solid work as always.

But the movie really belongs to Milla Jovovich as the alien superweapon Leeloo. Sexy, tough, vulnerable, dangerous, amazingly graceful, and did I mention sexy? all at once, even though half her dialogue is in a made-up gobbledygook language Jovovich sells every second of it. She can break your heart crying in one scene and have you cheering as she kicks butt in another, and she looks amazing doing it all. Her scene standing on a building ledge in a costume made of flimsy bandage strips instantly achieved iconic status the moment the movie premiered. The model/actress seems to specialize in headlining high-priced B-movies, of which this certainly qualifies, and does a good job of it in most, but has never been better than the way Besson (her husband at the time) tailors this film to her. Respected character actor Ian Holm looks to be enjoying himself as the bumbling priest who knows Leeloo's secrets, and Gary Oldman absolutely hams it up to heart's content as the main villain. I'll even say that Chris Tucker's obnoxious radio DJ Ruby Rhod (often compared unfavorably to Jar Jar Binks by many) is a perfect fit for Besson's outlandish universe.

The Fifth Element is a ridiculous movie, to be sure, and its rampant silliness may rub some the wrong way, but if you can tune into the right wavelength its entertainment value can't be beat. It's the type of movie you want to watch again as soon as you've finished, and will find yourself constantly cueing up favorite scenes to use as demo material. It plays even better at home than it did in the theater, and as such has made perfect fodder for every home video format since its original release.

The Remastered Blu-ray Disc:
Sony Pictures Home Entertainment previously released The Fifth Element as one of their premiere launch titles for the Blu-ray format back in June of 2006. That disc met with scathing criticism for its poor video quality. Mastered from dirt-ridden film elements, the prior Blu-ray transfer was also soft, flat, filtered, and generally unimpressive for a title intended to showcase the wonders of High Definition video. To their credit, Sony has taken viewer complaints seriously and responded with this freshly remastered edition of the movie. 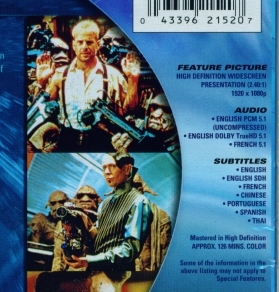 Unlike the traditional "double dip", in which a studio adds a small handful of new bonus features to a previously released title and calls it a Special Edition to milk a few extra bucks out of fans, the new Fifth Element Blu-ray is almost a stealthy re-release. The disc has no new supplements that weren't on the last edition, uses the exact same interactive menus, comes packaged in virtually identical cover art (once again that hideous Photoshop travesty first inflicted on the Ultimate Edition DVD), and is not being marketed with any particular fanfare. The studio is treating this as less a new release than a correction to the previous "defective" version of the movie. In fact, owners of the original disc can even contact Sony to exchange their old copies for the remastered edition. Now that is indeed an admirable move on the studio's part, one that they deserve great praise for.

Be warned, however, that Sony has not recalled the original Blu-ray from retailer shelves, and this will no doubt lead to consumer confusion since the two look so similar to one another. If shopping for this at retail, check the back cover for a Dolby TrueHD 5.1 audio listing, which is the clearest indicator that you're holding the remastered version.

Video:
The new Fifth Element Blu-ray is encoded in High Definition 1080p format, this time using MPEG4 AVC compression on a dual-layer 50 gb disc (the last release was MPEG2 on a single layer). The movie is once again presented in its theatrical aspect ratio of approximately 2.35:1 with letterbox bars at the top and bottom of the 16:9 frame.

Now we're talking! Sony has come a long way over the past year, and nothing exemplifies this better than a comparison of the two Fifth Element Blu-rays. The original edition is a sad joke in comparison to the remaster, which finally does justice to the movie's vibrant and colorful photography. The difference is clear right from the opening credits, seen for the first time on any home video release without shimmery text. Next, as the camera pans down to Earth, the establishing shot of the Egyptian excavation site actually appears to be in focus, a huge improvement. Better yet, all that dirt crawling over the print during this section of the movie... completely gone. Throughout the film, no longer does the video look flat and filtered. The new picture is consistently sharp and detailed, with much better texture and clarity. The contrast range is also improved, taming the black crush in shadows and white clipping in hot areas of the frame, lending the image a greatly enhanced sense of depth. Even the colors, already impressive before, look more natural and pleasing. This is eye candy of the first order.

The movie still has some grainy sections, which isn't objectionable in itself, but the texture of the grain looks a little noisy at times. Nonetheless, digital compression quality is much improved. A smidge of edge ringing pops up in a few places, but in general is so reduced over the prior Blu-ray (much less the DVD editions) that it's hardly worth complaining about. The worst examples of this are the shots of the spaceship landing and taking off again in Egypt, but I'm beginning to suspect that the artifact there may be endemic to the visual effects themselves.

This is how The Fifth Element should have looked the first time around. If the original Blu-ray had been this nice, the format would have had a much less rocky start.

The Fifth Element Blu-ray disc is not flagged with an Image Constraint Token and will play in full High Definition quality over a Blu-ray player's analog Component Video outputs.

The photo images used in this article were taken from the DVD edition for illustrative or reference purposes only, and are not intended to demonstrate Blu-ray picture quality.

Audio:
The movie's soundtrack is provided in uncompressed PCM 5.1 or in lossless Dolby TrueHD 5.1 formats. The need to have both an uncompressed and a lossless version of the same soundtrack on one disc seems a little redundant. Once decoded, the lossless track is 100% bit-for-bit identical to the PCM ("lossless" of course means no loss), so just use whichever one your equipment supports. At the time of this writing, not all Blu-ray players will fully decode TrueHD; many (including the one used for this review) can only extract standard Dolby Digital 5.1 quality from discs encoded with TrueHD. As a result, I evaluated the disc primarily using the PCM track, which appears to be identical to the previous Blu-ray edition.

I didn't really love the PCM track on the original Blu-ray, and listening again I feel the same. The film has a very aggressive surround mix with a bouncy musical score, lots of bass, and many discrete directional effects zipping around through every speaker. Nevertheless, the disc audio sounds a little thin and dull. Dialogue is suppressed low in the mix and isn't always clear. While there's plenty of aggressive bass, it's very boomy and overly loud, as if it had been intentionally cranked up to wow home theater fans who place too much value in their subwoofers. Don't get me wrong, it's not awful by any means, and there are several impressive passages, but truthfully I was surprised to find the Ultimate Edition DVD's DTS track to be more robust and full bodied, with less bombast and a better integration of the dynamic range.

Extras:
Once again, only a single supplement from the Ultimate Edition DVD has carried over.

Missing from the DVD edition are six production featurettes and a photo gallery. You'd think if they were going to the trouble of re-releasing the title, Sony might have found some room to squeeze in a couple of these. No such luck.

Easter Eggs:
Hidden on the disc is a selection of HD test patterns. You can access these by entering 7669 on your remote control from the disc's main menu. Use the Skip button to page through the patterns.

Final Thoughts:
Better late than never. As a Fifth Element fan, I say that without sarcasm. As disappointing as the original Blu-ray release of the film was, the remastered edition is a huge improvement that finally gives the movie its proper due in High Definition. And with Sony offering to exchange old copies for free (email [email protected] for details), who can complain? The remastered Fifth Element is of course highly recommended.