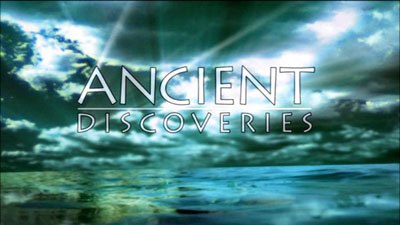 Ancient Discoveries first appeared on The History Channel in late 2003 as a three-part documentary series based around an intriguing premise: that many technologies assumed to have been discovered or invented in the modern age were actually known to ancient civilizations (namely the Greeks and Romans) thousands of years ago and the knowledge effectively lost during the Middle Ages. The show returned in 2005 for three more segments and ultimately evolved into a weekly series that began airing in January of 2007. In a poorly titled release, those first six 50-minute episodes are now available on DVD and should not be confused with the episodes currently in circulation on The History Channel or the single-episode DVD available from A&E's website.

Ancient Discoveries posits that famous innovative thinkers like Archimedes, Ctesibius, Galen, and Heron discovered or invented numerous technologies and procedures previously thought to have been first imagined in just the last few centuries. Unfortunately, with the slow destruction of the famed Library of Alexandria as well as the slow fall of the classical Roman Empire, the knowledge was not passed on to future generations and effectively disappeared. Through interviews with scholars and archaeologists, demonstrations from historical replica builders, and computer-generated renderings, this DVD set makes its case in six general categories: computing, medicine, robotics, warfare, naval engineering, and power systems. 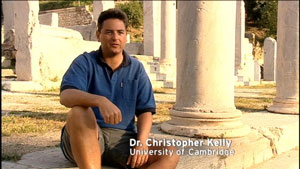 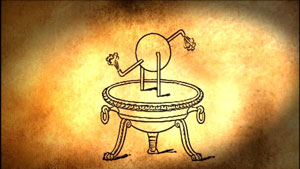 Each episode runs 50 minutes in length and covers a handful of related inventions that lay the historical foundation for the topic at hand. Many of these analyzed creations should be known to the viewer already and are not specific examples for the overall thesis of rediscovery, but they are presented to help the viewer understand the context of the episode's primary subject, what was happening in history at the time and the events leading up to the seemingly anachronistic device in question. For example, the episode that deals with power systems focuses a significant amount of time on the Roman aqueducts, a fantastic hallmark of Roman ingenuity to be sure, but not a shocking revelation about the past. This approach gives the viewer some background on Rome's concepts of power generation in a manner that makes the significance of finding what appears to be a 2000-year-old battery more clear.

On the first disc are the initial three episodes, entitled "Computing", "Medicine", and "Robotics". "Computing" covers the advancement of time-keeping techniques, from the classic sundial to Ctesibius's use of constant water flow and primitive gear mechanisms, leading up to what is known as the Antikythera mechanism. An isolated artifact discovered in the wreckage of an ancient cargo vessel, the mechanism's origin and use are largely a mystery, but its elaborate system of gears suggest an advanced early device for calculating the positions of the heavenly bodies. "Medicine" is mostly devoted to Galen, a Greek physician in the Roman Empire who pioneered numerous medical techniques, honing his craft on wounded gladiators and soldiers on the battlefield. The unique discovery in this episode is a human skull that implies an effort to perform a rudimentary type of brain surgery. Finally, "Robotics" is all about the great Heron of Alexandria, a clever machinist who used principles of air compression, wind power, and basic mechanics to swindle religious worshipers and entertain the masses at the theater. He also essentially invented the steam engine! 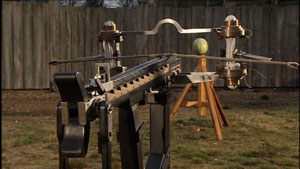 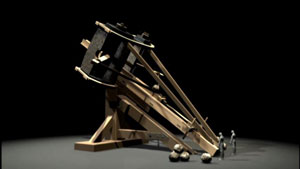 Disc Two contains the second batch of episodes that aired in 2005: "Warfare", "Ships", and "Power". Some nice improvements are made in these episodes -- notably the CGI renderings are more detailed, the background music is less repetitive, the dramatic re-enactments aren't so cheesy, and the overall production value is simply better. "Warfare" starts the group, and it is probably the most entertaining of the six included in this set. Catapults, ballistas, battering rams, flame throwers, and even the 40-feet-tall mobile siege tower known as the Helepolis are all featured, as told through the story of Silva's drawn-out siege of the Jewish settlement in Masada. "Ships" covers different aspects of Roman naval engineering, but is most specifically focused on Caligula's infamous pleasure barges and the opulent sophistication that went into their design. The last of the stories, "Power", details the aforementioned Roman aqueducts, water-powered gristmills, early applications of solar power, and the enigmatic "Baghdad Battery".

While each of these episodes is thoroughly engrossing, the driving theme of re-discovery is somewhat hit or miss. The knowledge of certain artifacts feels like a groundbreaking discovery and a legitimate hole in our commonly accepted human history, while others seem to make just for an entertaining story. Interestingly, many of the objects discussed in this series have also been the subject of MythBusters episodes. Of note, Adam and Jamie unsuccessfully attempted to construct the Archimedes Steam Canon featured in "Warfare", successfully demonstrated the potential uses of the Baghdad Battery from "Power", and spent two episodes analyzing the feasibility of Archimedes' solar-powered "Death Ray", alleged to set ships ablaze at the Battle of Syracuse by harnessing the reflective power of polished Roman shields. Consequently, I would have appreciated a little more analysis of these devices than is provided in this series, as it sometimes glosses over just how realistic the concepts actually are. Still, the overall premise of Ancient Discoveries is strong, and the way it is presented keeps each thematic episode from being too dry or feeling overly long. If you are at all interested in this type of technological history, you're likely to enjoy all six of the episodes on this DVD. 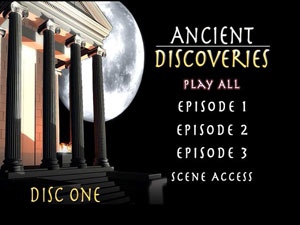 The presentation of Ancient Discoveries on DVD is definitely underwhelming. The video is offered in 16x9 anamorphic widescreen, which is nice, but the quality leaves a lot to be desired. Compression artifacts are present throughout, with particularly distracting aliasing visible in the fixed-axis camera pans and computer-generated renderings inherent to this style of documentary. Colors are a little dull too.

Audio is available in Dolby Digital 2.0 English. It is adequate but unremarkable.

There are no subtitles or closed captioning for the hearing impaired.

None. Considering all the progress made in the analysis of the Antikythera mechanism since the "Computing" episode originally aired, at a minimum I was hoping for some kind of epilogue on that story (even in text form), but there are no bonus features of any kind on this set.

Ancient Discoveries establishes the premise that ancient civilizations discovered or invented many of the technological concepts we have long assumed to be only a few centuries old, but that the knowledge was lost as empires rose and fell through Europe's transition to the Middle Ages. The six episodes featured on this set represent the first two batches of what is now a weekly series on The History Channel, and their analysis of ancient design is both informative and entertaining. Considering the average quality of the DVD release and the absence of any additional features, I have a hard time recommending you actually purchase this set, but if you have even the slightest interest in the topics presented here, I enthusiastically suggest you Rent It.