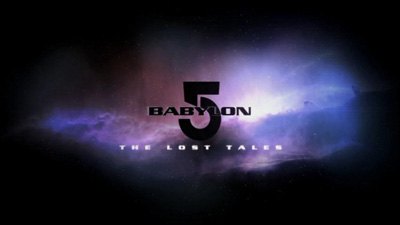 Before sitting down to review this DVD, I stole away to the kitchen to prepare a quick snack while the disc booted into the main menu. As I returned to my home theater, I noticed the disc had automatically cycled past the menu and directly into the feature presentation. The Babylon 5 station rotated in glorious widescreen, Christopher Franke's "Sleeping in Light" theme swelled in digital surround, and Citizen G'Kar's unmistakable voice began to set the stage. Whoa! Stop the player, stop the player! I wasn't ready. Physically, I had everything I required to enjoy a new DVD, but emotionally I wasn't there yet. Those of you who experienced this epic saga from the beginning likely know the feeling, the attachment that forms to these characters, and I needed a moment. It had been quite some time since I immersed myself in the rich universe of our last best hope, and I needed a moment to let it sink in: this is brand new Babylon 5 content.

N.B. This review assumes the reader has seen the original five-year story.

Babylon 5: The Lost Tales marks the first of potentially many Direct-to-DVD journeys back to the Babylon 5 universe. Due to marketing strategies -- likely covering the scenario where sales are poor and no more DVDs are produced in this series -- the full title is buried in small print on the back of the case: Babylon 5: The Lost Tales - Voices in the Dark. Trimmed from the original plan for three half-hour stories, Voices in the Dark features two independent 35-minute character pieces that are thematically related and loosely bridged together in the middle to form a single film.

The first of these stories features now-promoted Colonel Elizabeth Lochley (Tracy Scoggins), still in control of the station in 2271, 10 years after the formation of the Interstellar Alliance. She has requested the assistance of Father Cassidy (Alan Scarfe) in handling a somewhat distressing situation: in Brown Sector, the stench is even more foul than usual and a resident named Simon Burke (Bruce Ramsay) is claiming to be possessed by the fabled demon king Asmodeus and is demanding an exorcism. Asmodeus suggests that God knew man would one day take to the stars and would be less inclined to continue following the more Earthbound concepts of the Christian religion, so he banished some demons to the outer reaches of space to one day return and remind us of the great evil in the universe and ultimately bring people back to the faith. The premise of this story is interesting enough, and the philosophical debate is performed well by Scarfe and Ramsay. 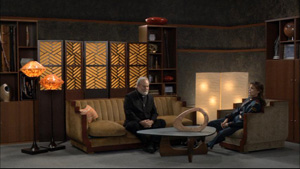 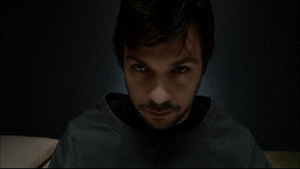 Unfortunately, Lochley comes across very stilted, as if Scoggins is out of practice with the character. In an ensemble show like the original series, this wouldn't be that big a problem, but this first half of Voices in the Dark is essentially a three-character play with only a handful of minimalist interiors, and the story must survive almost completely on the strength of the dialogue and the actors. Without all three of them at the top of their game, the ultimate resolution of the episode becomes a little underwhelming. Also detracting from the quality of the piece is some of the camerawork in Burke's cell. Obviously, director J. Michael Straczynski is trying to create a level of disorientation in these scenes, but the effect is too overt and poorly executed.

ISA President John Sheridan (Bruce Boxleitner) stars in the second story, dovetailing with the first through a communique with Lochley that implies the two events take place concurrently. As Sheridan prepares to return to Babylon 5 for a 10th Anniversary celebration of the Interstellar Alliance, he is visited in a dream by Galen (Peter Woodward). The mysterious technomage shows him a vision of the future (eerily similar to Enterprise's "Shockwave") where New York City is destroyed by the current third in line for succession to the Centauri throne and son of Cartagia, Prince Dius Vintari (Keegan MacIntosh). As it just so happens that Vintari will be accompanying Sheridan on his journey to Babylon 5, Galen tries to convince the President to take matters into his own hands and ensure that the Prince does not return from the voyage alive.

Boxleitner eases back into the character of Sheridan so effortlessly that it's hard to imagine he ever left. Whereas Scoggins seemed to struggle with her section of Voices in the Dark, Boxleitner takes control of his and turns the somewhat overused "What if you could kill Hitler?" concept into something more compelling than it probably deserves. His scenes with the Centauri Prince hold together well, and MacIntosh captures some of that underlying insanity we came to know from Emperor Cartagia. Woodward is also very strong here and maintains Galen as an edgy and disturbing character instead of softening him into some lovable sage delivering wisdom from beyond. Rounding out the cast is a small but very effective performance from the always dependable and still gorgeous Teryl Rothery as an ISN reporter hoping to gain some insight from the President as he returns to the site of his greatest triumphs. 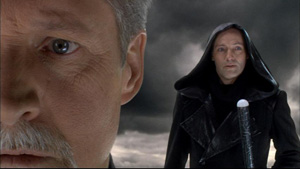 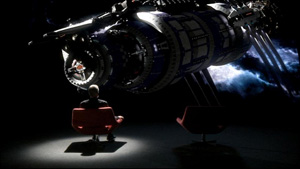 There are some obvious and expected changes between this new release and the original Babylon 5, including a wonderfully reverent title sequence. Notably, digital effects technology has evolved so much since the mid-1990s that a lot more can be accomplished for less money and still look dramatically better than some of the cheesy effects we became accustomed to. The potential certainly exists for some fantastic battle sequences, and we get a brief glimpse of that during Sheridan's story. Unfortunately, due to budget concerns with a Direct-to-DVD release, the digital effects and green screening are leaned on very heavily, to the point where the physical interiors feel cheap and inauthentic. Combine this with the narrow scope of the short stories and the handful of characters involved, and it just doesn't feel like Babylon 5. The original arc was so vast and epic and was bigger than anything television had ever seen and may ever see again, yet Voices in the Dark is so isolated and tiny and, to be blunt, inconsequential. That doesn't necessarily make it bad, simply unremarkable, and adjusting to Babylon 5 in that state makes for a very difficult transition, one that I hope is easier to swallow in future releases. As it is, Voices in the Dark provides a chance to spend a few more minutes with some beloved characters, including a couple of genuine lump-in-the-throat moments, but there isn't much else here.

Babylon 5: The Lost Tales - Voices in the Dark is presented in 16x9 widescreen with anamorphic enhancement, and it looks very good. The colors pop and the digital renderings predictably look much better than what was available for the individual season releases. Rarely, some subtle sharpening is visible when characters are set against a completely digital background, but for the most part, the video is very solid.

Audio is available in English Dolby Digital 5.1, and it is equally strong. Christopher Franke's new score sounds nice, and the surround channels are used effectively (most notably in the cell with Burke), with good balance between the effects and dialogue.

Subtitles for the feature presentation are provided in English. 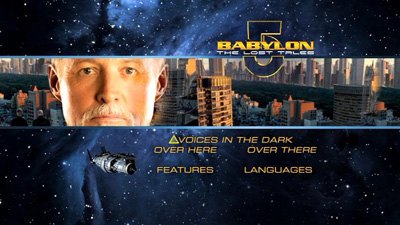 Two of these "interviews" are Joe and a cast member sitting on the set talking about various aspects of production for five minutes. Joe may ask a question or two, but it's less an interview than a brief discussion between friends. The third is a short piece where a camera follows Tracy Scoggins around the set while she talks with members of the crew who normally would not be seen on camera. It is a decent glimpse into the production, but I would have enjoyed a little more in-depth discussion with the actors.

Joe, Bruce, and Tracy share memories of their departed friends. 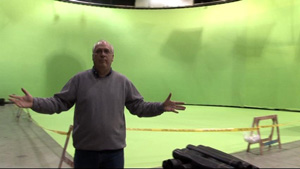 This is a sampling of 6 video diaries writer/director Joe Straczynski filmed during production to help promote the release on various websites. Outside of a strange obsession with a sock puppet version of the show, there is some really good material here. One annoyance, however, is that each short segment has its own credits sequence, which makes the Play All feature somewhat irritating.

A Q&A -- well, really just an A -- with Joe, as he addresses some of the questions fans of the show have been asking him with regard to this new entry. He covers topics like why he chose to direct this first one and tries to give a breakdown of what some of the lesser known crewmembers provide to the final product.

The strength of Babylon 5 was never in individual episodes, but the slow building of its epic five-year story and the unparalleled way its characters evolved throughout their experiences. Consequently, it seems near impossible to capture the spirit of the show in short 35-minute anthology stories with three or four individuals, particularly starting with Lochley, who is arguably the least developed major character from the show. One would hope that if the series continues, and we get the promised stories with stronger characters like Garibaldi and Mollari, this will be less of an issue; but in this first release, the vast Babylon 5 universe feels so uncharacteristically small, and the strengths that made so many people fall in love with it have very little opportunity to flourish. If you're a fan of the series, you already pre-ordered Babylon 5: The Lost Tales - Voices in the Dark on DVD, so hopefully my comments in this review will have absolutely no impact on the potential for future releases. Because as much as I relish the opportunity to spend even the fewest of moments with these beloved individuals and as much as I would love to see this series continue so it can explore some of its deeper characters, I cannot in good conscience give it a rating any higher than Rent It. But buy it anyway.