After years of alcohol abuse Jacob (Mads Mikkelsen) has found peace working in a secluded orphanage in the heart of India. Hoping to secure a large financial donation he travels back to Denmark to meet Jorgen (Rolf Lassgard), a powerful businessman, who has expressed interest in assisting the orphanage. After a short encounter Jorgen invites Jacob to attend his daughter's wedding.

At the wedding Jacob meets Helene (Sidse Babett Knudsen), Jorgen's wife. The two recognize each other.

Submitted as Denmark's official Oscar entry in 2006 Efter brylluppet a.k.a After the Wedding is arguably Susanne Bier's most accomplished work to date, one that surpasses even her acclaimed Dogme hit Elsker dig for evigt a.k.a Open Hearts (2002). Impeccably produced, superbly acted, and polished to perfection this is a film whose conventional themes produce unconventional results.

Under the surface of a straightforward script the audience is bound to uncover a complex exposition of human characters with fascinating flaws. As the story progresses Jacob, Jorgen, and Helene face dilemmas they are incapable of resolving on their own. More importantly time becomes a factor for each of the main protagonists - Jacob must accomplish his mission, Jorgen must finish his plan, and Helene must reevaluate her past. 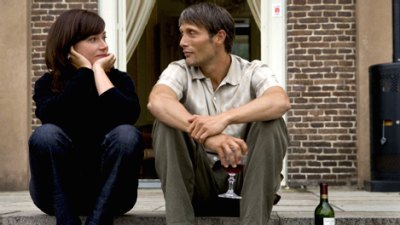 Pic's strongest asset however isn't its ability to analyze the emotional turmoil its characters undergo. It is Bier's capacity to immerse the viewer right in the middle of all things dramatic without siding with any of her thesps. There is no sense of guilt here nor there are any accusations being fired. Right and wrong are practically left outside of the story. What Bier delivers is authenticity, an excellent story devoid of overdramatization.

Anders Thomas Jensen's script has prompted some to place After the Wedding side by side with the work of Danish director Thomas Vintenberg and particularly his somewhat similarly-themed Dogme hit Festen (1988). I could not disagree more with such a comparison. While the two films tend to reflect on similar themes there is a harsh discrepancy in their tone, the manner in which they speak to the audience. Festen is a brash, edgy, and pessimistic satire whose merciless criticism on Danish upper class leaves a bitter taste in the mouth. It is a derogatory filmmaking at its best. Bier's After the Wedding is quite the opposite, a realistic story about hope and the little things in life that bring people together.

Presented in its original aspect ratio of 1.77:1 and enhanced for widescreen TVs the print is in excellent condition. It is progressive and properly converted truthfully recreating the picture's theatrical look. Contrast is handled particularly well allowing the viewer to appreciate Bier's delicate use of light (night and daylight scenes vary quite a bit as they reveal a different amount of grain). Furthermore, the actual print appears in top-notch condition as well as there were no scratches, debris, or any other damage marks that I could spot. Finally, edge-enhancement is practically absent from this print allowing for a pleasurable viewing experience.

An English-Danish 5.1 track has been provided for this release which serves the film exceptionally well. Dialog is crystal clear and dialog very easy to follow and I could not detect any disturbing audio drop outs/hissing(s). Optional English, Spanish, and English HOH have been supplied as well with a perfect syntax devoid of grammatical errors.

The only substantial extra on this release is a lengthy interview conducted by film critic Morten Pill with Danish director Susane Bier in which she touches upon different aspects of the film as well as commenting on some of her previous works. The interview allows for a curious peek at the world of a director who many consider, this reviewer included, being Denmark's most important filmmaker. I strongly recommend that you watch this piece, it is revealing to say the least. In addition you will find nine deleted scenes, each with English subtitles, which appear to have been left at the cutting floor.

One of my favorite films last year After the Wedding further solidifies my conviction that Susane Bier is amongst the top directors currently working in Europe. The DVD is of exceptionally good quality well worthy of DVDTALK's highly recommended mark.