It is difficult to dislike what Daniele Thompson has achieved with Fauteuils d'orchestre a.k.a Orchestra Seats (2006), last year's official French Oscar entry. Whether you like intelligent storytelling with rich and unpredictable characters or, as the French describe them, comedie-dramatiques with enough romanticism to awake even the coldest of hearts, this film has it all.

Provincial charmer Jessica (Cécile de France) heads to Paris ready to experience what the city has to offer. She quickly gets a job as a waitress at a chic bistro on Avenue Montaigne where the rich, famous, and those who wish to join them mingle. There Jessica recognizes Catherine Versen (Valérie Lemercier), an enormously popular but exhausted TV start, who is only a few days away from performing a much-anticipated play. Amongst the guests of the bistro is also Jean-François Lefort (Albert Dupontel), an accomplished pianist, who is preparing a gala-recital at the music hall across the street. Jessica will also befriend Jacques Grumberg (Claude Brasseur), an aging collector who has decided to part ways with his fortune, as well as his son Frédéric (Christopher Thompson) who is walking away from a touchy affair with his father's notably younger mistress (Annelise Hesme). 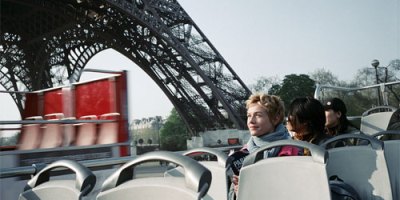 Originally titled Orchestra Seats, then corrected to Avenue Montaigne, Thompson's film walks the fine line between an arty foreign production with a fractured Altman-esque storyline and a conventional light comedy with enough soapy moments to enchant those who typically shy away from reading subtitles. Pic also introduces a catchy soundtrack mixing chanson with classical piano soothing some of the edgier scenes where chemistry (and some poorly scripted lines) isn't that impressive.

Relying on a number of old tricks Avenue Montaigne follows its eccentric protagonists slowly intertwining their stories as they come to know each other - love affairs, broken dreams, and new relationships become the focus of attention. Jessica's character is stylishly used to connect the scattered pieces of this romantic mosaic and by the time the end credits roll the audience is more than likely to have embraced all of the protagonists regardless of their personal imperfections.

Obviously without the charming presence of Cecile de France Avenue Montaigne would have not been what it is. The rising French star does an impressive job as the low-key, ready-to-face-the-world, Jessica whose only weakness is her romantic heart. And since this is precisely the feature her newly-found friends seem to appreciate the most all of a sudden Paris becomes the city to call home. Only after all is said and done one is more than likely to walk away from Avenue Montaigne with the clichéd "too bad it was just a movie".

This is an interesting print. Presented in its original aspect ratio of 2.35:1 and enhanced for widescreen TVs Avenue Montaigne reveals the same slightly soft look found on the French edition. Colors are accurate but muted, contrast is quite delicate, and edge enhancement not of much concern. ThinkFilm have provided a nice properly converted and progressive transfer, devoid of damage marks/scratches, which I am satisfied with. I do wonder however how this film looked in theaters. I could not attend a screening of it and therefore have very little to compare this R1 presentation with. Suffice to say both the R2 and R1 discs seem to be on par with I can only describe as a "soft look". This being said, the rest of the presentation I am content with.

Presented with a French 5.1 track Avenue Montaigne reveals a good, mostly solid audio treatment. The music soundtrack is well separated from the dialog and the two don't seem to overshadow each other. Dialog is very easy to follow and I did not notice any audio dropouts/hissing. The English subtitles unfortunately are forced which will surely irritate more than a few of you.

Aside from a standard featurette which is more of a Behind the Scenes type of supplemental material revealing cast and crew in action as well as a gallery of trailers there is nothing else to be found here. It is a shame as a lot could have been added.

Perhaps one of the most accessible French Oscar entries in quite some time Avenue Montaigne is bound to find a wide audience of admirers. It is fresh, entertaining, and quite charming, proving that Cecile de France is an enormous talent. The R1 DVD offers a nice print of the film yet unfortunately in the extras department there is hardly anything worthy of your attention.