There are some movies that you have to wonder how they ever got the green light.  Pitches like "How about a Honeymooners movie, but with a black cast", "A fourth Crow movie couldn't suck", or "Let's make a live action Underdog movie" sound so ludicrous that you can't imagine anyone putting up money to make it.  Well somehow, someway, someone was talking into putting up the money to remake Alfred Hitchcock's classic movie Rear Window, except as a teen horror film.  Sounds horrible doesn't it?  Actually the film, Disturbia, turned out much better than it had any right to due in large part to the excellent leads.  While this is ultimately an uninspiring and forgetful movie, its worth a look and the Blu-ray disc presents this film in about as good a light as can be expected.

While driving his home from a fishing trip with his dad, Kale (Shia LaBeouf) gets into a horrible car accident and his father doesn't make it.  A year later, Kale's still having trouble coming to grips with what happened, and when an uppity Spanish teacher talks about his father to get a rise out to the young man, Kale decks him.

For once in a movie someone is punched and there are legal consequences.  Kale is sentenced to three month's house arrest and has a locator placed on his ankle.  As the summer slowly goes by, Kale starts getting stir crazy.  He watches his neighbors (no one in his neighborhood closes their blinds even in they are having an affair with the maid or killing people) including the hottie who just moved in next door, Ashley (Sarah Roemer).

Eventually Kale notices that a near by neighbor, Mr. Turner (David Morse), is acting strangely.  He has a car with a dent in it that matches a vehicle seen at the site of an abduction.  There are other odd things too, though nothing substantial.  Kale confides in his friend Ronnie (Aaron Yoo) who isn't so sure that Kale's right about his suspicions.  As only happens in movies, Ashley comes over one day and introduces herself, invites herself in, and after hearing what's up decides that they need to stake out Turner's house.  Is it all in his mind, or is Turner really the serial killer the police have been looking for?  If he is can three kids bring him to justice?

This movie has a lot of sloppy writing, inconsistencies, and plot hole littered throughout it.  If you can ignore that, it's a fairly satisfying thriller, but that's a bit hard to do.  One of the problems is that no one acts like real people, they act like characters in a bad movie.  If you were a teenage girl and a man you suspected of being a killer stopped your car in a parking garage, took the keys out of the ignition, climbed into the passenger's seat and locked the door, what would you do?  Unlock the door and run like hell probably.  Ashley doesn't do that.  She sits there and lets him play with her hair as he talks to her.  If you though you saw someone killed, wouldn't you call the cops?  Kale doesn't.  If you were the killer, would you leave your shades up so that a neighbor kid could film you killing a hooker?  Sure, why not.

The director also seems to have watched a lot of horror films and wanted to pay "homage" to them by ripping off scenes.  A killer smashes a hole through a door and peaks through ala The Shining, and elsewhere someone points a video camera at their face and mutters "I'm so scared", a shot straight out of Blair Witch.  Because the whole plot is lifted from Rear Window these make it look like the director is just unimaginative and sloppy.  Given the other problems with the film may be the case. 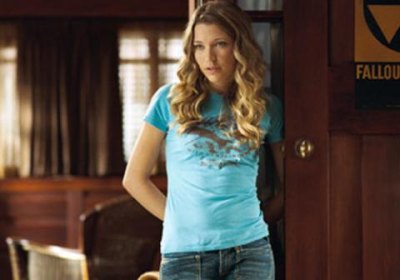 Even with those critiques, this isn't a horrible movie.  The first five minutes are excellent, and set a high tone for the picture that the rest of it never really lives up to.  After that the movie drags for the next half hour, setting up the situation.  After Mr. Turner starts confronting the kids however, the tension starts to build and there are some suspense filled moments including the scene where Ronnie is trapped in the suspected killer's garage when he gets home.  (It's not nearly as suspenseful as the scene in Rear Window where Grace Kelly is trapped in Raymond Burr's apartment when he arrives home.)

The principle actors did a very good job with what they were given.  Sarah Roemer was fine as the pick-tease next door bombshell not only looking good in a bikini but also having an under lying layer of teen angst that worked well with her character.  Shia LaBeouf continues to prove that he's a gifted actor who will be great one day as long as he doesn't start down the Lindsay Lohan Path to Self Destruction.  He was able to bring his character to life, acting both truly bored and horribly afraid.  He didn't over play the role either, something that would have been easy to do.

This disc presents the movie with its original aspect ratio of 1.85:1 and the image looks good.  Unfortunately it's not quite good enough to put it with the best looking Blu-ray releases.  On the positive side the image is very sharp and clear.  The opening scenes where Kale and his father are fishing bright and vivid and the image really jumps off the screen.  There isn't any print damage what so ever, and grain is nonexistent.  On the down side however is the fact that the picture looks overly processed.  Most of the film takes place inside a house with the shades drawn that has been decorated in different shades of brown, either that or at night.  This dark palate works with the film, but it looks like the colors have been tweaked and the contrast boosted and that gives the movie an unreal look in parts.  It isn't an image that draws you in, rather one that is technically fine but emotionally distant.

On the digital side things looked fine.  There weren't any problems with the encoding.  The dreaded edge enhancement wasn't used on the film, the sky wasn't filled with mosquito noise, and the aliasing and posterization weren't problems at all.

This disc offers viewers the choice of a DTS 6.1 ES track or a Dolby Digital 5.1 EX track.  I viewed the film with the DTS track and spot checked the DD 5.1.  Both sounded very good.  I was actually surprised by the quality of the audio mix on this movie.  Just about all of the film is low-key sonically speaking, with people talking or someone looking out of a window.  Yet this film manages to take that and create an enveloping feel with the audio.  Excellent use is made of the soundstage, with all corners of the room filling with sound.  The rears are used quite a bit, mostly for ambient noises; people mowing their yards outside, kids playing in the street, etc.  This works well, and sets the viewer up for some audio shocks that succeed for the most part.  The rock tracks that the teenagers listen to sounds like they were included just for the obligatory soundtrack CD release, but a few of the songs fit the atmosphere and tone of the film very well.  Since this was a recent release there are no worries on the quality front.

All of the extras included in the SD release of this movie are also included here, something that should be standard practice but woefully isn't.  The impressive thing is that it's all presented in high definition, something that Dreamworks gets kudos for.  It starts off with an audio commentary with director DJ Caruso and the stars Shia LaBeouf and Sarah Roemer.  This is one of those chaotic party tracks where everyone is having a good time chatting with each other about the movie, but they don't really give you that much solid information.  There's a lot of behind the scenes anecdotes and jokes, but I prefer a more analytical commentary.

The obligatory making-of featurette runs about 14-minutes and was more enjoyable.  I usually dread watching these, but this one wasn't too bad.  They didn't pack it with too many clips from the film, a common problem, and actually spent some time talking about the production rather than having everyone say what an honor it is to be in the film and how wonderful everyone is to work with.  Well worth watching.

The pop-up trivia track was pretty useless, giving one sentence nuggets of knowledge about the film that really weren't that interesting.  Do we really care how old Shia was when he filmed this movie?

There are also four deleted scenes which weren't horrible and are worth taking a gander at, and a gag reel that isn't worth it.  It's a fairly unfunny set of outtakes, mainly of Shia goofing around.  There's also a gallery of stills from the movie,  a music video, and a theatrical trailer.

This movie has a lot of problems, but even so it was fun to watch.  Just don't think about it too much afterwards or you'll find more and more wrong with the script.  There was a good amount of suspense and the actors did a fine job.  Though this Blu-ray disc looks a little over processed the image is still very good and the soundtrack is excellent.  It doesn't have a lot of replay value, but it's worth checking out.  Make this a rental.