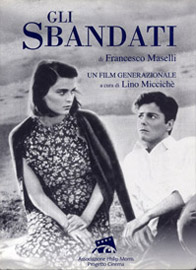 Aside from his controversial semi-documentary Lettera aperta a un giornale della sera a.k.a Open Letter to the Evening News (1970) and Michelangelo Antonioni's directorial debut Cronaca di un Amore where he contributed as a writer (1950) the work of Francesco Maselli is practically unknown to the English-speaking film buff. Thanks to Italian juggernaut Ripley Home Video however Masselli's classic Gli Sbandati a.k.a The Abandoned (1955), a film that reunited the writer-director with Lucia Bose, is finally available on an impressive digitally-restored and English-friendly DVD.

Scripted by Eriprando Visconti, nephew of Lucino Visconti, Gli Sbandati transports its viewers to a provincial Italian town on the verge of a massive socio-political transformation. The year is 1943, a few days after the Italian government has accepted Eisenhower's armistice proposal.

Lucia (Lucia Bose), a poor girl who has fallen in love with the wealthy looker Andrea (Jean-Pierre Mocky), is torn between helping a group of Italian soldiers on the run and a promising future with the man of her dreams. Surrounded by Andrea's friends and family however who openly support the Fascists Lucia senses that sooner rather than later she will have to part ways with her lover - and when Contessa Luisa (Isa Miranda), Andrea's mother, encourages her son to leave Italy behind and seek happiness in neutral Switzerland Lucia's world collapses with a bang.

Beautifully photographed and openly critical of Italian bourgeois culture Gli Sbandati was Maselli's first feature film. In 1955 the picture won the coveted "Best New Director" award at the Venice Film Festival instantaneously placing Maselli amongst Italy's best. In the following years the young writer-director would passionately critique Italy's political elite and complete his most acclaimed work Gli Indifferenti a.k.a A Time of Indifference (1964).

Gli Sbandati however remained Maselli's most unadulterated, passionate, and unpolished attempt at critiquing the privileged. Devoid of the typical for Italian cinema at the time strong melodramatic flavor the film spoke to audiences with a tone few directors managed to channel through their work - the characters were real, their struggles were real, the injustice they fought felt real. Not surprisingly Maselli's anger struck a chord with those who felt that the political status quo in Italy needed a change.

Finally, even though not as intimate as his Le Italiane e l'Amore a.k.a Latin Lovers (1961) the pic also revealed a side of Maselli many would argue is substantially more effective than that seen via his controversial political films.

The print provided by RHV is stunning. I own a total of nine discs from these producers and each one of them has been nothing short of spectacular. Presented in its original aspect ratio of 1.33:1 Gli Sbandati appears to have undergone meticulous restoration work which should put many distribs to shame. Impeccable degree of detail, excellent black-white reproduction, and an excellent degree of contrast is what we have here. Furthermore, the actual print is in a healthier condition than many releases of contemporary films that come through my hands. To sum it all up this is how a classic film should be restored and transferred to DVD. Period! PAL-encoded, Region 2.

Presented with an Italian mono track and optional Italian and English subtitles the audio treatment is just as impressive. Crystal clear and easy to follow dialog is what we have here devoid of any audio drop-offs or hissing. The English translation is very well done sans a few minor grammatical mistakes.

Aside from a lengthy interview with Maselli which is in Italian only and the original theatrical trailer the disc arrives with a massive 28-page booklet offering plenty of trivia and historical information in addition to a few beautiful poster-replicas. Unfortunately, the entire booklet is in Italian only.

An English-friendly release by RHV is always a cause for celebration. The Italian distrib's selection of classic films is absolutely breathtaking (remember this is the same producer that gave us the beautiful Before the Revolution by Bertolucci) and I just can't stop looking at their catalog. Not surprisingly Gli Sbandati comes easily "recommended" - a great film, a top-notch transfer, and an excellent price tag for an import.