'til Death - The Complete First Season 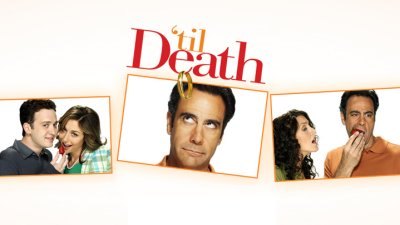 'Til Death is a situational comedy (sitcom) that airs on the Fox network. The show first aired in 2006. It is about a seasoned married couple who have been together for over twenty years and a newlywed couple who have been married barely two weeks. The show follows a pretty common, episodic format dealing with the veterans and the rookies giving and taking advice each other, as they have different perspectives on how to make a marriage work. As an overall series, the show's first season offers a delightful and fun set of twenty-two episodes.

Headlining the cast is Brad Garrett (Everybody Loves Raymond) with Joely Fisher (Ellen), Eddie Kay Thomas (American Pie), and Kat Foster. Garrett plays Eddie Stark. Eddie is a gruff, overly cynical forty-something. He works at the local high school as a history teacher. He is married to Joy (Fisher), who is also on the cynical side of life. She works as a travel agent. The two have a good chemistry together that turns their cynical personalities into some solid laughs. The Stark's newlywed neighbors are Jeff (Thomas) and Steph (Foster) Woodcock. Jeff is the new vice-principal at the high school and Steph is working on a graduate degree in literature. The younger couple's chemistry isn't as natural, but works for the most part.

The Woodcocks are an inexperienced and naive couple, who periodically come to the Stark's for marital advice. At the same time, the Starks team up with the Woodcocks to learn about how they handle marital situations. The two different perspectives provide some fun avenues for both couples to experience, which result in some hearty laughs. This interaction is the primary source comedy. The couples take rather regular (and sometimes small petty) situations into a riot. 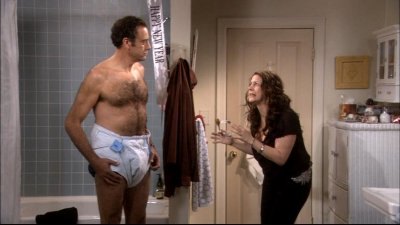 The show's cast is pretty strong, with Garrett as the show's real gem. He repeatedly steals the spotlight (which is fine by me) and has a strong chemistry with Thomas and Fisher. However, while Thomas has a good working chemistry with Garrett, his character does come off as laying it on too thick. Kat Foster, however, is not a real strength. She is a pretty generic character and does not provide a real definitive role in the show. In fairness, as the show progresses she develops a stronger foothill with Thomas. This is mostly because Thomas plays a very conservative character and it is later revealed that Foster's character has a racy, sexual side.

The series begins with the episode "Pilot". It is a fairly light-hearted episode with some solid laughs, definitely not the season's best (the show clearly gets better as it goes on). The Starks, a cynical couple who have been together for many years, loosely greet their newlywed neighbors, the Woodcocks. The simple contrast between the two couples and their behaviors is what drives this episode (and future ones). The rest of the plotline deals with the Woodcocks first argument, which is about buying a pool table.

As the season continues, there are plenty more episodes dedicated to the silly antics of married life. "Sex For Furniture" is a good example. Joy faces the difficulty of having to buy new patio furniture. The problem is that Eddie always gets too involved in the process and she wants to be able to do it without his rules of engagement. Steph gives Joy some "sound" advice: to trade sex for furniture. Joy takes her advice and finds that after twenty years of marriage, it just doesn't appeal to Eddie. The chemistry Garrett and Fisher have in this episode is perfect example of how well they are together. 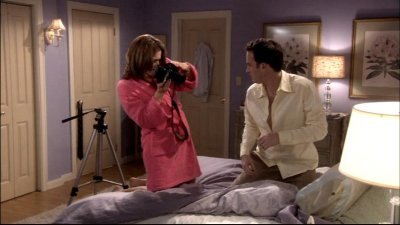 "Dream Weaver" is another strong episode. The Woodcocks convince the Starks to join them on a weekend retreat in the mountains. While there, it comes to light that Steph had a sex dream about Eddie. When he finds out about the dream, it boosts his spirits. He turns into a sexy, confident man. Jeff freaks out about it, as no man wants to hear about his wife dreaming about another man. The entire main cast carries the situation in an over-the-top manner and both Garrett and Thomas make the situation a blast.

Other fun episodes include "Your Mother Or Your Wife", an over-the-top story about picking the most important women in your life; Eddie reveals he has a hidden affair with his mommy, "The Hockey Lie", Jeff finds out Steph lied to him about her interests; she doesn't really like hockey and Eddie smirks about how normal it is to learn the truth about your spouse, "The Bachelor Party", Eddie learns Jeff never had a bachelor party and tries to make it up to him; Margaret Cho and Anthony Andersen guest star, and "I Heart Woodcocks", Cho and Andersen return as the Cofelds; they become the Woodcocks' new best friends and it leaves the Starks feeling alone.

Overall, 'Til Death is a sitcom with a fairly strong cast (thanks to Garrett). It never gets too serious or too goofy. The plotlines are simplistic and easy to follow, which always lead to Garrett and/or Thomas in some absurd, over-the-top slapstick situation. The first season has decent start with its pilot episode. As the season progresses, the show gets much better as the cast understand their roles with each other. However, on the downside the content feels pretty repetitive. The good news is that Garrett's great performance helps keep the content fresh and funny. In the end, you will want to check out 'Til Death's first season. 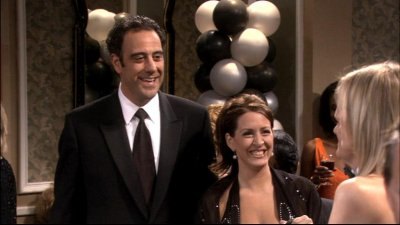 1. Pilot: Longtime couple Eddie and Joy Stark give neighbors Jeff and Steph Woodcock marital advice that results in the newlyweds' first fight.
2. Sex For Furniture: Steph sells Joy on the benefits of exchanging marital favors for new patio furniture.
3. The Ring: After hearing Jeff and Steph's great engagement story, Joy feels Eddie owes her a ring.
4. The Wood Pile: Eddie and Joy get into a big fight over the wood he's been stockpiling in their garage.
5. The Garage Band: Jeff decides to join Eddie's garage band to get some "away time" from his doting wife.
6. Your Mother Or Your Wife: A visit from Jeff's mom causes marital problems for him and Steph.
7. Dream Getaway: To rekindle their romance, Jy proposes a romantic getaway to Eddie.
8. Death Sex: Eddie's sex life with Joy improves when he mistakenly gets some negative medical results.
9. The Toaster: Eddie's burned up when Joy insists on unplugging their toaster for environmental reasons.
10. Daddy's Girl: Eddie and Joy must deal with their daughter Allison's most recent romantic breakup.
11. The Anniversary Party: A neighbor's 25th anniversary party gives the Starks a new outlook on their own marriage.
12. The Hockey Life: Steph admits to Jeff that she only pretended to be a hockey fan while they were dating.
13. Fight Friend: Eddie discovers his wife confides in their neighbor, Nicole, after he and Joy have a fight.
14. The Colleague: Joy gets jealous when Eddie's history department hires a beautiful young teacher.
15. The Bachelor Party: Eddie and the boys take Jeff to a strip club after learning he didn't have a bachelor party.
16. The Italian Affair: An old photo from a trip to Italy brings back unpleasant memories for Joy.
17. The Clay Date: Allison's plan to study ceramics is just the first shock the Starks get when they visit her at college.
18. I Heart Woodcocks: Eddie and Joy go to great lengths to win back the Woodcocks' friendship.
19. The Coffeemaker: Problems ensue when Steph gives the Starks a coffeemaker that Jeff's mom gave them.
20. That's Ridiculous: Eddie's shocked at how much he misses Joy when she goes off on a trip with Allison.
21. Webbie's Not Happy: Eddie's upset when Joy sets out to find a wife for his swinging bachelor friend, Webbie.
22. Summer Of Love: Allison and her boyfriend decide to spend the summer in his van outside the Starks' house. 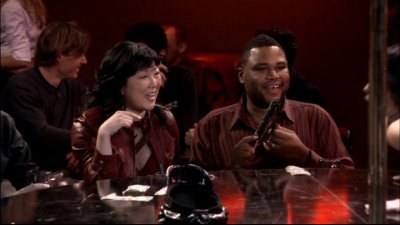 
Video:
The video in this release is given in anamorphic 1.78:1 ratio widescreen color format. The picture quality is quite good. It suffers from a slight grain, but detail remains to be sharp and clear. However, there are some occasional moments when the picture suffers compression artifacts. This is a rare occurrence, but it does happen. Needless to say, the show should look good on bigger television sets.

Audio:
The audio in this release is given in English 5.1 Dolby digital surround sound. Overall, the sound quality is very good, providing an audible and clean audio track. The majority of activity is in the forward channels, but there is decent use of the surround sound capability. Music and sound effects sound very rich and vibrant.

There are no subtitles, but there is support for closed captioning.

Extras:
The 'til Death season one special features include a couple featurettes, a bloopers reel, and a clip from a promo event. The main attraction of each extra is Brad Garrett. He pushes the envelope and acts goofy as ever. It is a fun side of him. I laughed harder watching these than some of the episodes.

Final Thoughts:
'Til Death is a fun and entertaining sitcom about two married couples that contrast each other in many different ways. The show's freshman season offers some intriguing episodes and a silly cast. At the head is Brad Garrett; he drives the show and has strong chemistry with the others. In general, the first season is pretty solid. The episodes are light-hearted and over-the-top, although somewhat repetitive. It is a show definitely worth seeing.