A cult French classic whose release in the United States is long overdue Je t'aime moi non plus (1976) has been finally released in the UK thanks to an ongoing collaboration between Studio Canal and local distribs Optimum Releasing.

Disenchanted waitress Johnny (Jane Burkin) serves food at a truck-stop far away from civilization. She falls for the beautiful garbage-truck driver Krassky (Joe Dallessandro) who appears to be gay. Attracted by her boyish looks Krassky falls for Johnny - thus enraging his boyfriend Padovan (Hugues Quester).

Pic's most unique quality is its arguably unstoppable desire to transgress. Dangerously intertwining the "acceptable" with the "unacceptable" Je t'aime moi non plus offers a multitude of different reads all evolving around a supposedly predictable affair (Gainsbourg was repeatedly questioned about his decision to depict the two gay lovers as "garbage-boys"). Yet, the love affair between Johnny and Krassky is neither conventional nor predictable.

There are different sorts of emotions driving the actions of the main protagonists as well. The thin line between lust and love is practically unrecognizable even though Johnny and Krassky are willing to give as much as possible. As a result the viewer is constantly guessing how far the relationship would go, how long it would last.

Pleasure, pain, love...are they universally connected? Or just plain excuses for what we are capable of doing to each other?

Je t'aime moi non plus is most certainly a film capable of splitting unsuspecting audiences right down the middle. Some will be mesmerized by its perky attitude, defying morality in a beautiful yet controversial fashion. Others will loudly decry it as a fallacious depiction of "unconventional love" wrapped in a hauntingly beautiful soundtrack. 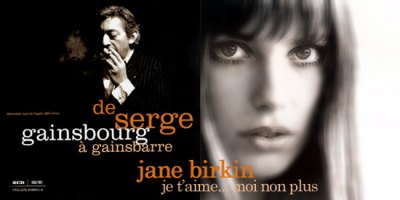 Presented in its original aspect ratio of 1.66:1 and enhanced for widescreen TVs the film looks beautiful. I am fairly certain the Optimum print is an exact replica of that released in France by Wilde Side. Colors are lush and vivid, contrast is very well handled, and the progressive print reveals an excellent degree of detail. Damage is non existent and aside from a few dust specs found in the opening scenes there is absolutely nothing here that one could be unhappy with. Region 2, PAL-encoded.

Presented with its original French mono track and optional English subtitles the audio is on par with the video presentation. Dialog is very easy to follow and the soundtrack comes off the speakers without any distortions, hissing, etc. Indeed, a solid presentation matching the excellent transfer described above.

Unfortunately, there are no supplemental materials to be found here.

For years this film eluded English speakers. The two releases that appeared in France during the last couple of years were unfortunately not English-friendly leaving plenty of potential buyers wishing for a solid release. Optimum have delivered just that: an exact replica of the French disc. It is a but unfortunate that extras have not been provided but the presence of this film in such pristine condition is indeed a small miracle. Recommended.