Cult Italian director Lucio Fulci whose passion for horror cinema has inspired thousands and thousands of dedicated fans gets a worthy treatment via New Entertainment World, a German distributor with a fascinating catalog, and their English-friendly release of Beatrice Cenci (1969). A rare effort by the Italian maestro with a distinctive period look pic presents a fascinating story, one that will surprise many of Fulci's hardcore fans.

Fueled by derision towards the Catholic Church Beatrice Cenci follows the story of a young Italian beauty (Adrienne LaRussa) who plots to kill her despotic father Francesco (Georges Wilson) with the help of her lover, stepmother, and a notorious bandit. Resembling a theater play with carefully scripted acts pic systematically attacks conventional notions about class, religion, and humanity.

It is almost impossible not to praise Fulci for what he has achieved with Beatrice Cenci. A film that far exceeds the expectations in terms of execution and technical presentation this is the work of a man with tremendous energy. Scripted as a collage of flashbacks, some quite disturbing, pic consistently plays with the audience and their perception about right and wrong. Abuse, torture, and revenge are the foundation for what felt to me as a veiled in secrecy personal statement.

In the grand scheme of things however Fulci showcases plenty of restrain where it matters the most: pic's stylization is eerie but not overwhelming. The result is a fascinating cinematic experience which does not suffer from heavy, worn-out, clichés (truly, pic does not preach lessons of morality, yet it is morality that drives it). 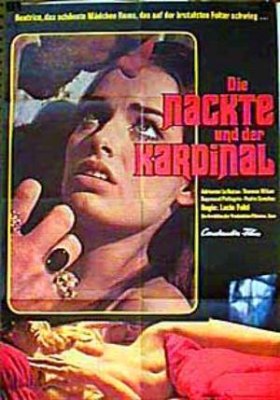 This is my first encounter with German distribs New Entertainment World. And so far I am quite pleased with what they have to offer.
Beatrice Cenci arrives in a lavish book-case touted as a limited uncut version (there are only 999 copies released and the one reviewed here is # 632). The actual case is very stylish with an excellent reproduction of the original poster art for the film used as a cover work. Presented in an aspect ratio of 1.78:1 and enhanced for widescreen TVs the film looks rather good: colors are slightly washed-out but convincing, contrast is manageable, while damage is practically non-existent. In fact, aside from a few dust specs here and there and a few scratches during the opening credits the print is in remarkable condition. Te rather disappointing fact here is that the German edition herein reviewed appears to have used an analog transfer. Even though of high-quality some of you with more elaborate set-ups are likely to notice that this could have been a much more impressive effort. As it is however I am still pleased with what has been provided here given how incredibly difficult it is to locate an acceptable English-friendly print of this very early Fulci work. PAL-encoded, Region 0

There are three different language tracks on this release and as far as I know they all have been used as "official" during the years. As I assume that this has a lot to do with Italian directors and their preference for overdubbing at the time I am pleased that all three dubs are present. The three options are (DD) : English, Italian, and German. I chose the English dub and suffice to say you will quickly notice that even English dialog is overdubbed at times with English. This being said the quality of the English dub is acceptable: there are no drop-outs and I could not detect any distortion. As it was the case with the video presentation however the source does appear to be the same: an analog master. Optional German subtitles are provided.

The following extras are found on this release: Trailer, Opening German credits sequence, Photo Gallery, Trailers for other releases.

Despite of the fact that this does appear to be an analog-mastered transfer it is a good one. Those of you who have not been able to benefit from the French release by Neo Publishing will certainly want to take a look here as this disc is indeed English-friendly. Given how incredibly difficult it is to locate this little seen Fulci gem to begin with I must recommend it.