Watching Protecting the King, the film biography of David Stanley, Elvis Presley's step-brother and the "youngest bodyguard in rock 'n' roll history," I started to notice something most curious: no one uses the words "Elvis Presley" in the film. Elvis is either referred to as "the Boss," or "the King," but no one actually says, "Elvis." Thinking that somewhat odd, I listened to the director's commentary for Protecting the King, and unless my ears blinked for a moment, D. Edward Stanley, the subject of this thin film bio as well as the writer, producer and director of the piece, never actually said the words "Elvis," either. He only referred to him as "the Boss," or "the King." 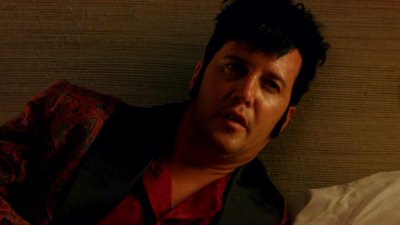 Other curiously missing elements from Protecting the King nagged at me. There's no Elvis music to be found here, not even knock-off imitators crooning the King's music (obviously a music rights issue). Colonel Tom Parker is nowhere to be seen in the filmed sequences. No Priscilla Presley, either. David's other brother, who also traveled with Elvis on tour, is never seen. And known members of Elvis' entourage are given new names in the movie, fake names which Stanley keeps in the director's commentary except for "Ronnie" (played by Tom Sizemore), whom he identifies as Lamar Fike. Too much of Protecting the King comes off as protecting D. Edward Stanley from defamation and copyright infringement lawsuits, apparently, because I can't think of any other reason that Stanley won't even dare to speak Elvis' or these other people's names, even in the commentary section.

But there's more missing to Protecting the King than just those whoppers. What's really missing is a central character interesting enough to hold the center of Protecting the King. Because when it comes right down to it, David Stanley as the subject of a screen biography, just doesn't cut it. There's a performance by Peter Dobson as "the King" (I'm going to risk it and call him "Elvis"), that's really quite compelling, but he only pops in and out of the film at isolated times, leaving the viewer stuck with underdeveloped dramatics concerning Stanley and his role as "the youngest bodyguard in rock 'n' roll history." That particular moniker is brought up several times, but I can't for the life of me understand why D. Edward Stanley would think such a story angle would be of the slightest interest to most people, especially when that story angle is as undernourished as it is here.

Equally vague is why we should care about the character "David Stanley" in the first place. The real Stanley is a shadowy figure in most bios and histories written by Elvis, and there's serious debate out there (from even the closest members of the "Memphis Mafia") as to just how fond Elvis really was of the sons of Dee Stanley, the woman who married Vernon Presley in 1960 (the general consensus in those bios is that the Stanley boys were "tolerated" by Elvis in order for them to procure drugs for him). In Protecting the King, Elvis and David appear to be extremely devoted brothers, which goes against just about every other account I've read. And as for David getting drugs for Elvis, that scenario is reversed in Protecting the King, with "the road" and Elvis being blamed for hooking D. Edward Stanley on drugs. Whatever the real truth is, nothing in Protecting the King's sequences with David and his young wife and his issues of cheating on her or doing drugs, is compelling enough to sustain the core of the film. When Dobson's "Elvis" character is off screen, Protecting the King becomes thoroughly routine and even quite dull.

Aside from the rather morbid and ironic sight of Tom Sizemore as "Ronnie"/Lamar Fike decrying the use of drugs, not much else impresses in Protecting the King. The opening sequence, where David introduces himself (via narration read by D. Edward Stanley) over a freeze frame montage, plays like "Scorsese-Lite," while the remainder of the film is a seemingly unending series of tight, mundane two-shots of actors delivering dialogue in a succession of hotel rooms. The cinematography by Philip Lee might have been interesting, had he been given a production design that successfully captured even the smallest sense of period detail, but unfortunately, that's as M.I.A. in Protecting the King as the words "Elvis Presley." D. Edward Stanley further compromises Protecting the King by weakly delivering the narration himself (instead of letting better actor Matt Barr as "David" do it). Ultimately, there's no real reason to see Protecting the King, because you never really believe you're seeing a true story based on anything, when the film doesn't even have the gumption to name its principle character. 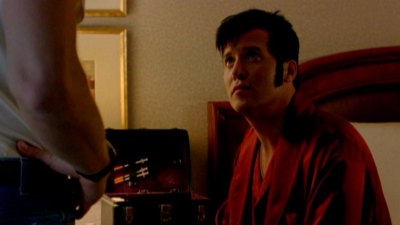 The Video:
The anamorphically enhanced, 1.78:1 widescreen image for Protecting the King looks fine, but it's such a visually boring film that ultimately, who cares? I saw no compression issues here, and colors are finely hued. Detail is fairly sharp.

The Audio:
You can listen to Protecting the King in a Dolby Digital 5.1 Surround Sound mix, but honestly, why would you want to? There's no Elvis music, and the anonymous score leaves little impact. There's also a 2.0 mix (entirely adequate), and close-captioning is available.

The Extras:
There's a thirteen-and-a-half minute behind-the-scenes featurette, Behind the Curtain, that's not exactly illuminating. There's a director's commentary, which I've already discussed above, as well as a theatrical trailer for Protecting the King.

Final Thoughts:
Too many limitations of what could actually be said or seen in Protecting the King, the story of David Stanley, the step-brother of Elvis Presley, seriously cripples the film's impact. And what remains is thoroughly routine and downright boring, with a central character we neither adequately understand nor empathize with. Protecting the King may be a rental for all you Elvis freaks ("Present!") who must watch everything about the King, but everyone else may safely stay away. Skip Protecting the King.