Woods Have Eyes, The

The woods may indeed have eyes, but a brain is questionable, as evidenced by the silly little horror thriller, The Woods Have Eyes, an undistinguished 2005 effort shot down in Florida. Supposedly "inspired by true events," I would imagine those are some pretty implausible, badly staged, tepidly acted, and ultimately boring "true events" if The Woods Have Eyes even comes close to what really happened. 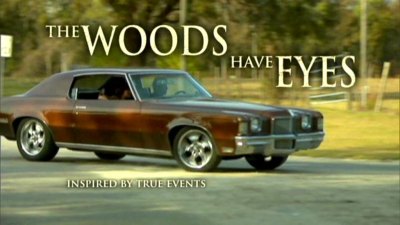 In upper state New York, a group of campers who have known each other for years return for one more summer before their camp ground is sold off. Brothers Carmine and Ernie (Joseph Anthony and Michael Bolten) arrive with Ernie's friend Louis (Taylor Jeffers), and the usual summer camp hijinks begin, including swimming in the pond, smuggled-in fireworks, and scary stories around the campfire. Carmine hooks back up with pretty Dannie (Ashley Totin), and they try to work out how they're going to continue their relationship when Dannie goes off to college in the fall.

But Dannie can't understand why Carmine and the camp owner's son, Joe (Garrett Harrison), want to try again this year and scare the younger kids, including Michael (A. J. Diaferio), Ernie, Louis and Fat Tommy (Cody Greer), by taking them out in the woods to show them "Cappy's Cabin." According to Joe's scary story at the campfire, Cappy's a murderous sailor who lives in the woods and marks his property line with the mutilated carcasses of butchered deer. Not telling the kids where they're going on a morning hike, Joe and Carmine plan on first ditching the boys, and then showing them a spooky cabin across the river that Joe had found earlier in the summer.

Unfortunately, horrors await the kids as the cabin turns out to be the home of the real "Cappy" (John Kyle) and his twin sons: muscle-bound, homicidal Lukie (Michael Christeas), and muscle-bound, homicidal, plate-in-his-head mental defective Clem (Adam Dunnells). Evidently, the boys were involved in car accident, which killed their mother and left poor Clemmy a few bricks shy of a full load (his opening scene involves him accidentally killing neighbor Billie Jo, played by knockout Amber Freeman). Now the family lives like feral animals in the woods, and when Clemmy kills again, Cappy and Lukie protect him by hunting down the rest of the boys in the woods. But they don't count on the survival skills (and the gradually evolving killer instinct) of Carmine.... 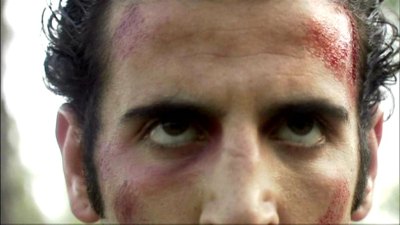 I actually didn't think The Woods Have Eyes would be too bad at the start, mainly because director Indelicato has a way with the young actors that seemed fairly natural. In particular, Anthony Joseph was pretty funny as the cocky, hair-obsessed New Yorker Carmine (he splashes on cologne and takes along a can of hair spray for their hike). But the film quickly goes south the minute the boys are attacked by the crazy family, with the director losing all sense of reality in the poorly staged action scenes. I'm not sure if director Indelicato should be checked for poor depth perception, but there's something decidedly off with his blocking of the young kids when they're hiding from the killer family members. Somehow, the kids have the ability to hunker down in front of scraggly, thin trees, or down in small little dips in the ground, while the killers stand only ten feet away, oblivious to their presence.

Other inconsistences start to pile up, including the fact that the director isn't able to physically define for the viewer, the area of the hunt and search. Watching The Woods Have Eyes, we get the feeling that it's not really that big of an area where the boys are being chased by the killers, and yet, people are screaming at the top of their lungs, and nobody hears anything (and yet when the cops and posse are looking for the boys, they remain strangely quiet as they search, never calling out their names - not exactly S.O.P.). Even more fundamentally silly is the decision by the boys to waste about 16 hours going back and forth between the killers' cabin, trying to kill them before being killed, instead of spending that time trying to get back across the river - which can't be more than a couple of miles in any direction. At one point, they know the killers have gone back to the cabin, so instead of hightailing their asses out of there (after all, they've been coming to these woods for years and years), they sensibly light off a big fireworks rocket to lure the killers to their hiding place, so they can search the cabin. And the final climax, where Carmine lures Cappy into a pathetically obvious bear pit trap (isn't Cappy supposed to be this superhuman woodsman?), would be laughable if it was even properly staged and shot.

There's not much to be said for the other acting in The Woods Have Eyes. Cappy and his boys fail to impress or scare, and Clemmy in particular is poorly sketched, with a cliched approach to portraying someone mentally backward ("Look! Birdies!") that's laughable, not menacing. The few gore effects are nothing special (check out that pathetically small stream of blood that comes out of the neck of denogginized sheriff's deputy Jefferson), while continuity errors frequently pop up (my favorite is when Carmine and the rest of the survivors are desperately looking for the road out of the woods...and you quite plainly see a road off to his oblivious left). The Woods Have Eyes' horror story is familiar enough, but its poor execution buries it in the woods for good. 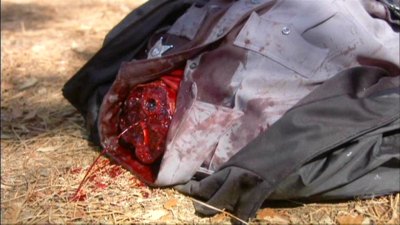 The Video:
The anamorphically enhanced, 1.85:1 video image for The Woods Have Eyes looks okay in the daylight scenes, but there's a lot of video noise and breakup during the darker night scenes.

The Audio:
The Dolby Digital 5.1 Surround audio mix (I'm constantly surprised at how many marginal titles get these mixes, while so many classic films on DVD go wanting) is fairly game, but I didn't detect a whole lot of separation. The optional 2.0 Stereo mix is entirely adequate. Close-captioning options are available.

The Extras:
Two short extras are included: The Making of a Stunt, which details how Joe was pulled through the cabin window (whoop-dee-do); and Blooper Reel, which shows the cast and crew having quite a bit more fun making The Woods Have Eyes than we do watching it.

Final Thoughts:
One brief gratuitous shot of nudity, some laughable gore effects, maniac killers that don't frighten, and some really odd blocking (um...I can see you right behind that tree, you know) - all on top of a thoroughly familiar victims-being-stalked-in-the-woods plot - add up to a whole lot of nothing in The Woods Have Eyes. You can safely skip it.