Cottage on Dartmoor, A

Directed by Anthony Asquith (who would later direct the hilarious The Importance of Being Earnest), A Cottage on Dartmoor is a suspenseful film that is an early forerunner of film noir, a proto-film noir if you will.  It has much of the dark atmosphere and tension that noir films are known for.  As Eddie Muller from the Film Noir Foundation commented in his introductory to this film at the 2007 SF Silent Film Festival, it would probably be a much better know film if the title wasn't so bland.  If it had only been named "Straight Razor to the Throat" people would have spent more effort seeking it out. 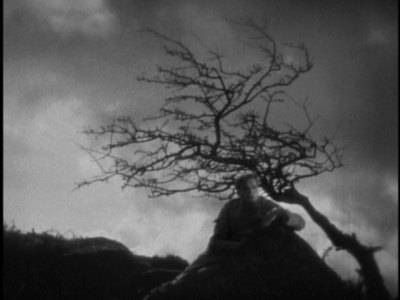 The plot, told through a flashback, involves a barber's assistant, Joe (Uno Henning), who is in love with the manicurist where he works, Sally (Norah Baring.)  Sally isn't really that interested in Joe however so she kindly resists his gentle advances.  Harry (Hans Adalbert Schlettow), a farmer from Dartmoor, has also noticed Sally and he starts getting his nails done just so he can spend some time with the attractive girl and Joe gets jealous.  He follows them out to the movies, and when Sally comes into work one day sporting an engagement ring, the barber gets so enraged that he's about to burst.  Unfortunately Harry walks in at that moment and asks Joe for a shave.  In one of the more suspenseful scenes in silent movies, Joe places a straight razor against his rival's throat...

This movie has a lot of the trademarks that would later be identified in noir films.  There is a lot of sexual tension, a love triangle, and dark, stylized lighting especially at the beginning and end of the movie.  Most of the story, as already noted, is told through a flashback.  It's also very gripping and one of the most suspenseful silent films that I've seen.  If this was made in the 40's, there's no doubt that it would be known as an excellent noir. 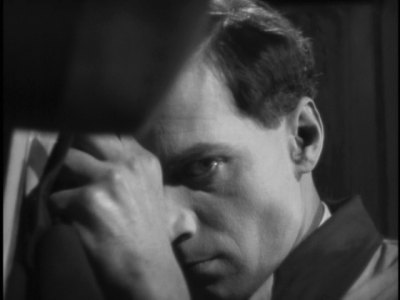 Asquith crafts a wonderful film.  He uses shadows and lighting very effectively to create a mood and the shots he sets up and often beautiful.  He also has some very nice edits that help move the film along while creating some interesting images and comparisons.  In one such scene an escaped convict has been seen running across the countryside and finds a pond of water.  He stops and kneels down, drinking the water from his cupped hands.  The camera focuses on the small waves in the pond, and then pulls back to revel the wavy water from a bathtub that a baby has just been pulled from.

The acting is very good also.  Filmed at the end of the silent era, Henning and Baring are both restrained in their roles but really bring their characters to life.  Especially Henning who has expressive eyes that reveal exactly what he is thinking.

Stephen Horne provides the accompaniment to this film on piano.  His playing was magnificent and the score he came up with meshed perfectly with the movie.  He was truly inspired with the theater scene too.  At one point Sally and Harry go to the movies, followed by Joe.  They laugh and cheer to a silent short, and then a talkie comes on.  When it does, Horne stopped playing his piano.  That simple act really brought home how talkies were a step backwards in many ways.  As the musicians on the screen took a break, the excitement died down, and so did the amount of entertainment.  Mimicking this effect was brilliant and effective.  (Originally the film had a record that was supposed to be played during this section to mimic the unseen actors on the screen.  The sounds were muffled and the dialog incomprehensible.  This was done to poke fun at the low fidelity sound that accompanied most films in those days, but alas this audio has been lost.)

The full frame black and white image was outstanding.  The film has been restored by the British Film Institute and they did a great job.  The contrast is excellent, the detail is great, and the blacks are nice and solid.  There was some slight blooming in a couple of spots, but this was rare.

I suspect that this is a PAL to NTSC conversion however.  There was some slight ghosting in a couple of scenes, but since this shows up in fast moving sequences it doesn't mar this film as much as it could.

Along with the feature film, there's also a full-length documentary, Silent Britain written and hosted by Matthew Sweet.  This was a nice accompaniment to the feature film and traces the history of British cinema during through the silent era.  The main theme of the piece is that early British filmmakers haven't gotten the credit they deserve and that's probably true. 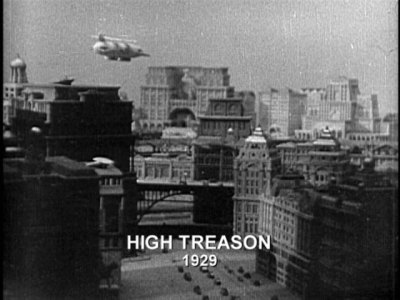 The documentary is filled with clips from many early productions and Sweet makes a strong case that British silents and been unduly ignored.  Unfortunately there are several parts where he either gets things wrong or makes some fairly wild claims.  In one section he says that Birth of a Nation (1915) was the first epic film.  What about Quo Vadis? (1912) and Cabiria (1914), both early Italian spectacles?  Later on he implies that block booking (the practice that a theater had to agree to take a studio's entire output rather than just selecting the big pictures to show) was done to squeeze out British film makers from their own country.  While I'm sure that Hollywood was pleased with that result, it wasn't limited to the British market.  Block booking was the standard practice even in America at the time, and to suggest that it was done only to hurt British companies was totally wrong.  (The program also refers to this, incorrectly, as "blind booking" since the theater owners had to *gasp* agree to show a movie that they hadn't even seen.  Of course even without block booking theaters have to schedule films that the manager hasn't seen, so that change of title only serves to misrepresent the matter further.)

Another odd claim that the documentary makes is that success Hitchcock had with his early British films wasn't due to his ability as a director, but because of the detailed scenarios written by Eliot Stannard.  The fact that Hitchcock created a whole body of high quality films, the vast majority without Stannard, solidly disproves this idea.  That fact is never mentioned.  It's also curious that the film would question the talent of the one big success story to come out of the British silent era.

Even with these questionable claims, the documentary is a wealth of information about early British Cinema.  Sweet profiles the major directors and producers but also includes information of stars that were wildly famous at the time but are sadly forgotten today.  Sweet includes interviews with several of these stars that were conducted in the late 60's and 70's, and those are wonderful.  One heart-breaking segment was Joan Morgan telling the story of how she was offered a contract with a Hollywood studio.  Unfortunately her father forbade her to accept it and it was easy to tell even in 1978 that this was the one great regret in her life.

There's no doubt that British cinema in the early days has been largely ignored.  This documentary, flawed though it is, does a lot to correcting that mistake.

This film was a hit at the 2007 SF Silent Film Festival and I'm glad that it is available on DVD.  This would make an excellent movie to screen for someone who hasn't been exposed to early film.  The story is engaging and very suspenseful, the acting excellent and the direction wonderful.  The sound and video quality are both excellent and the documentary that is included as a bonus, while not perfect, is a very nice introduction to early British cinema.  Together this is a great package that comes Highly Recommended.