Tora-san 35: Tora-san's The Go Between

Panorama // Unrated // March 15, 2007 // Region 3
List Price: $12.95 [Buy now and save at Hkflix]
Review by Stuart Galbraith IV | posted October 20, 2007 | E-mail the Author
Though the twice yearly visits with itinerant peddler Torajiro "Tora-san" Kuruma (Kiyoshi Atsumi) and his family in Tokyo's timeless Shibamata area is as welcome as it ever was, to paraphrase writer Bill Warren, Tora-san's The Go Between (1985) not only isn't exploring anything like virgin territory -- it's territory that's been ploughed and covered over with condominiums. 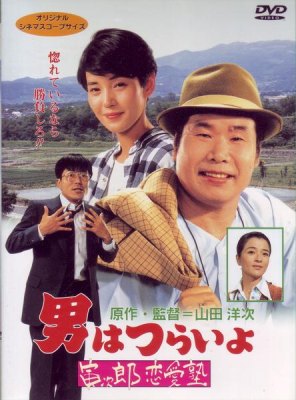 The Japanese DVD, in 16:9 format but lacking English subtitles

On one of the Goto Islands in Nagasaki, Tora-san and fellow peddler Ponshu (Keiroku Seki) come to the rescue of a frail old lady, Hama Egami (Kotoe Hatsui), who falls and injures herself. Tora-san and Ponshu gingerly help her to her home and she invites the men in to thank them, offering them a snack of sake and octopus. The three end up sharing a raucously fun evening but during the night she falls gravely ill. Tora-san doesn't know quite what to make of her deathbed, Christian prayers (Nagasaki has an unusually large Christian population), but before expiring she thanks Tora-san for a memorable last evening.

At the old lady's funeral, Tora-san meets her adult granddaughter, Wakana (Kanako Higuchi). Though she now lives in Tokyo, Wakana was raised by her grandmother after her own mother committed suicide. Of course, Tora-san falls for her and makes a beeline to Shibamata so he can be near her. There he gradually learns that a bookish law student, Tamio (Mitsuru Hirata), also living in her apartment building, has been madly in love with her for some time. Setting aside his own interests, Tora-san plots to bring the couple together.

The Tora-san series was stuck between a generational rock and a hard place. The preceding 34 films had virtually run the board pairing Atsumi with nearly every major actress of his generation: Machiko Kyo, Kyoko Kagawa, Ruriko Asaoka, Ayako Wakao, etc. More recently, Atsumi's love interests (affectionately referred to as "Madonnas" in Japan) had grown younger and younger; Higuchi, for instance, was 26 when this was made, almost 30 years Atsumi's junior. Rather than run the risk of turning Tora-san into a dirty old man instead of merely a foolish and child-like one, writers Yoji Yamada and Yoshitaka Asama more often than not opted to have Tora-san play the role of matchmaker, bringing together young couples who already are attracted to one another but unable for one reason or another to express their true feelings.

In later films as the character of Mitsuo, Tora-san's nephew, became a teenager (and the young actor playing him, Hidetaka Yoshioka, evolved into one of the better actors of his generation), Tora-san took the troubled, lonely boy -- in many ways more like his black sheep uncle than his sensible, hard-working father -- under his wing, trying to help Mitsuo out with his teenage romances. This approach was much more successful, and scripts usually facilitated parallel stories of Tora-san involved with women closer to his own age.

Here though, it's pretty much business as usual, and the results are entertaining but not terribly original. Tora-san's bemusement at Christian ways is funny but not developed, and subplots and subordinate themes about working women and sexism in the workplace are similarly undernourished. The best thing about Tora-san's The Go Between (Otoko wa tsuraiyo Torajiro renaijuku or: "It's Tough to Be a Man Torajiro's Private Romance School") is its early scenes on Kami Goto Island with the old lady. Though to Western eyes the idea of an old lady inviting two strangers into her home for dinner and sake (and eventually inviting them to stay the night) would seem incredibly dangerous, such old-fashioned hospitality is still quite common in rural Japan even today, albeit nowadays pretty much limited to Japan's older generation.

Seki, who died last year at the age of 78 (he was a few days younger than star Atsumi), was another veteran of the series, appearing in most of them though his roles were usually limited to a scene or two; rarely did he enjoy a part as large as this, and Yamada and Asama explore their friendship in interesting and amusing ways.

It became a tradition to open every Tora-san movie with a pre-credits dream sequence, and this film opens with an especially funny one, a spoof of The Ballad of Narayama.

Tora-san's The Go Between is another watchable but disappointing presentation, letterboxed but not 16:9 enhanced. The single-layered disc is pretty blah but, for now, this is the only way to see the series with English subtitles. The mono sound is adequate, as are the imperfect but acceptable English subtitles. Optional Chinese subtitles are also available.

Tora-san's The Go-Between will please but not overly impress fans of the series. As stated at the top of this review, it's always nice to catch up with Tora-san, Sakura, Auntie and Uncle and the rest of Tora-san's extended family, so that even lesser entries like this one are still pretty enjoyable. Recommended.